Republican Minority Leader Kurt Daudt, one of the leading candidates to be the next Speaker of the Minnesota House of Representatives, wouldn’t say much Wednesday about the new direction of his now 72-member caucus. But he would say this: There will be a separate agriculture committee under Republican control, and it won’t be chaired by someone from Minneapolis.

That was a conspicuous dig at Minneapolis DFL Rep. Jean Wagenius, the outgoing chair of the Environment, Natural Resources and Agriculture Finance Committee in the House. It was also a strong indicator of the new flavor the all-new Republican majority will bring to St. Paul over the next two years.

That’s because Republicans have Greater Minnesota voters to thank for their newfound majority — they won 11 seats Tuesday night, and only one was from the metro area.

“There were a lot of Democrat freshman incumbents that came to St. Paul and voted with the Minneapolis and St. Paul members and really lost touch with their districts,” Daudt said at a press conference in St. Paul, where he was surrounded by new and old Republican lawmakers. “I think they suffered the consequences of that in the election last night.”

These are seats Daudt thinks they can hold again in two years if they do the right things with their newfound power. That means not overreaching and no wasteful spending — the things he said irked rural Minnesota voters under Democratic power.

The biggest liability for Democrats on the campaign trail was passing a new office-building project for state senators, Daudt said: “It was an example of misplaced priorities.”

But he hesitated to put too much blame on a controversial 2013 vote to legalize gay marriage in Minnesota. The vote put Democratic rural members on the spot whose districts had voted earlier for a constitutional amendment to ban gay marriage. In the end, seven DFLers who bucked their voters on gay marriage lost Tuesday night.

Daudt noted, however, that the two rural Democrats who voted against gay marriage for that reason also lost their seats on Tuesday night. “I don’t think we can make a broad blanket statement that that issue had anything to do with the end results,” he said. 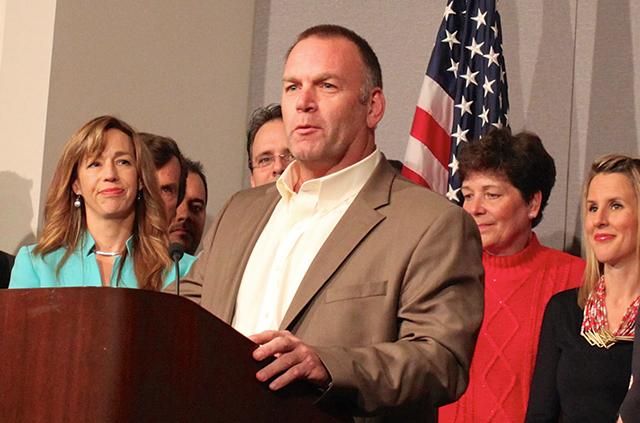 One thing Daudt did make clear about his new caucus: It wasn’t going to jump into power looking to “divide and conquer,” since it still has to work with DFL Gov. Mark Dayton and a DFL controlled Senate. The last time Minnesota had divided government, the state went into a 21-day government shutdown over a budget solution.

“I don’t see any reason why we would have a [government shutdown], I really don’t,” Daudt said, repeatedly trying to cast his new caucus in a different light than the Tea Party labels that had been tossed out on the campaign trail. “I hope that the Democrats see it that way as well.”

And what issues will a Greater-Minnesota-focused Republican House make a priority over the next two years? Daudt is still figuring that out with his members, but he did say this:

House Republicans to the Twin Cities: It’s not about you