What happens when you honor a Hall Of Fame athlete by naming a street for him near his old team’s stadium … and then tear that stadium down?

For years, the block-long segment of what had been 9th Avenue South near the former Metrodome bore signs designating it as Carew Drive, in honor of Rod Carew, the Minnesota Twins Hall-of-Famer who played with the team for 11 years in the 1960s and ’70s.

But Carew Drive no longer looks out at the stadium where the Twins began playing in 1982 (four years after Carew left town to play for the Angels). The Twins moved out after the 2009 season, and the Metrodome no longer exists. Today, the area is essentially a giant construction zone, the future home of the new Vikings stadium; cranes and steelwork now dominate the neighborhood.

But two streets named for two of the most famous people to ever to play baseball in Minnesota — Carew and Kirby Puckett — still remain, adjacent to the spot where their sport is no longer played; in the shadow of a building where, when completed, it won’t be played.

Something had to be done to recalibrate the city’s sporting geography. So, as part of last summer’s All Star Game festivities, the city gave commemorative designation to two streets around Target Field. A stretch of Second Avenue North from 7th Street to 6th Street is now also dubbed “Rod Carew Drive” while Seventh Street North from just east of 10th Street North to 2nd Avenue North is also “Kirby Puckett Place.” Located at the point where the two streets intersect: the bronze statue depicting Carew in his inimitable batting stance.

The only problem with the two new designations is that they’re honorary rather than official. Unlike the existing streets near the Vikings stadium construction site, honorary designations don’t change the underlying street names; it simply means a white sign is placed beneath the blue street signs that continue to identify the street’s official name.

Which brings us to the second part of the rejiggering, wiping the map clean of the original (and still official) Carew Drive, which began this week with a Minneapolis Planning Commission hearing. If approved by the city council, the street will now instead be, once again, 9th Avenue South.

“It came from the Vikings,” said city council member Jacob Frey, who, along with fellow council member Abdi Warsame recommended the name change to the planning commission. Once the official name is changed, the Vikings will ask that a commemorative name to added to honor longtime coach Bud Grant. Not having two streets named after Carew “makes sense,” Frey said, as does honoring a legendary Vikings personality near the team’s new stadium. 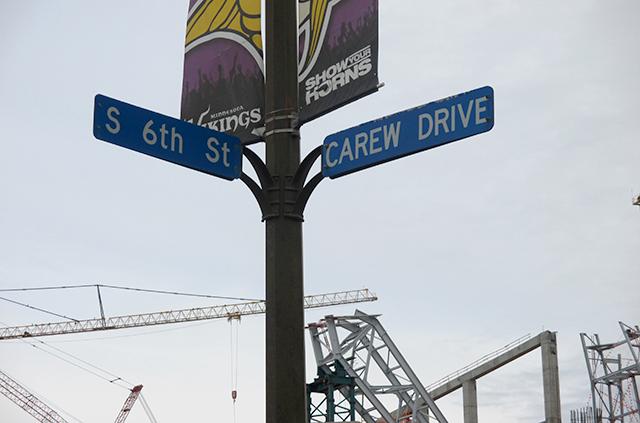 MinnPost photo by Peter Callaghan
The older Carew Drive near the construction site of the new Vikings stadium.

In case all this is becoming too logical, don’t worry. Where Chicago Avenue South passes in front of where the Metrodome once stood — and where the new Vikings stadium will eventually — still lies Kirby Puckett Place. This too is an official street name, not a commemorative designation. And though there is no proposal to end the official honor for the late Puckett as of right now, Frey said he understands the Vikings have a desire to put something more Vikings-centric on that stretch as well.

Puckett’s name is filling a vital role there, however, even if only for a short time more. Had he not been honored with an official street name back when the Metrodome occupied the site, the primary street in front of the billion-dollar-plus stadium would be: Chicago Avenue.