It was a confusing Election Day in Minnesota. Voters easily sent Democrat Mark Dayton back to the governor’s office, but they gave Republicans a majority in the state House. Democrat Al Franken sailed to victory in what some thought was a competitive race for the U.S. Senate, but Republicans nationally took control of the chamber. Minnesotans showed an independent streak by splitting tickets, but they didn’t throw enough votes to the actual Independence Party to keep them in the major leagues.

Here are a few takeaways from a perplexing Tuesday:

1. Turnout was low — like really low
As in, Minnesotans haven’t been less engaged in electoral politics in at least two decades. Preliminary voter turnout numbers show just over half of Minnesota’s 3.9 million eligible voters showed up to the polls on Tuesday. Yes, it was a midterm election and the sixth year of President Barack Obama’s presidency, so numbers were going to be low. But voters this year were even less enthused than they’ve been in many of the past midterm elections. Nearly 56 percent of eligible voters turned out in 2010 and slightly more than 60 percent showed up in 2006. This at a time when voting was easier than it has ever been, thanks to a no-excuse balloting law passed this year that provided the one bright spot when it came to turnout: 197,691 absentee ballots have been accepted by the Secretary of State’s office, compared to 127,248 in 2010.

2. The Iron Range is not ready to flip. Yet.
Republicans went out looking to weaken Democrats’ hold on the Iron Range in Minnesota’s arrowhead region. Democrats said they didn’t see it, and in the end, they were right. Rep. Rick Nolan won re-election to the U.S. House by 1.4 percentage points, and the results, geographically, mirrored how Nolan won in 2012. Being a midterm, the electorate was smaller, but Nolan’s voting bloc stayed intact, including on the Iron Range. 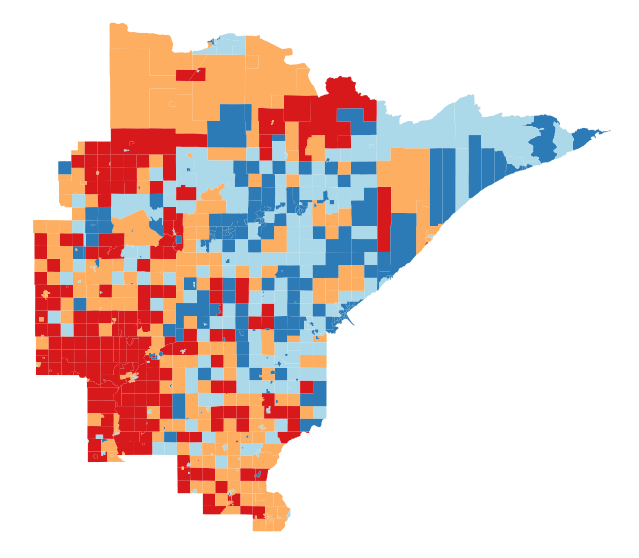 It wasn’t just Nolan, though. Sen. Al Franken and Gov. Mark Dayton both came away with double-digit victories in Itasca and St. Louis counties, which contain most of the Range. And while it’s not the definitive metric for determining Range voting, those three Democrats won every single precinct in some of the biggest Range-area cities: Chisholm, Hibbing, Virginia, Eveleth, Gilbert, Mountain Iron, Ely, and Hoyt Lakes (potential home of the PolyMet copper-nickel mine, which has turned into a bona fide political football). Republicans may well have eaten into Democrats’ advantage on the Range (must-read writer Aaron Brown certainly believes that’s the case), but for now, the Range is still DFL territory.

3. Minnesotans like divided government
With Minnesota under all-DFL control for the last two years, returning divided government was a common theme on the campaign trail this fall. But the notion that voters would actually split their individual ballots between parties seemed dubious. But that’s exactly what happened. How else did DFL U.S. Sen. Al Franken win nearly 54 percent in the 8th Congressional District while the area’s incumbent DFL Rep. Rick Nolan squeaked by with only 49 percent? That means some people voted for Franken as well as Nolan’s Republican challenger, Stewart Mills, who earned 47 percent of the vote.

4. The GOP’s power lies in Greater Minnesota
In Tuesday’s most perplexing result, Dayton took the governor’s office in Minnesota while Republicans swept legislative races in rural Minnesota regain a comfortable majority in the House. As House Minority Leader Kurt Daudt pointed out, it’s easier to engineer a Republican majority in the Legislature than it is at a statewide level. Why is that? More than half of the state’s population lives in the metro area, and those voters are more reliably blue than many rural districts are reliably red. That means a statewide race can be won on turnout in the metro, but the House votes can be very localized around each of the state’s 39,000-resident districts. 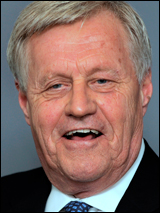 5. Collin Peterson may be indestructible
In a Republican year, in a Republican district, with Republican money flooding against him, Collin Peterson earned a 13th term in the House. Peterson was already contemplating retirement this year, and it seems likely now, having survived this cycle, that he’ll get to go out on his own terms. Whether that means retiring after next session, or running again in what should be a more favorable Democratic environment in 2016 and calling it quits sometime afterward, Peterson showed this year that he could absorb some big hits and survive. Peterson said Wednesday that he was never overly-worried about the race, spending about what he spent on his 2012 blow-out win and running a retail campaign like those of the past. He was reward with more votes than every other Minnesota Democratic congressional candidate outside of Keith Ellison and Betty McCollum.

6. Outside groups sat out the Senate race
When it came to spending, Minnesota’s 8th District race was outside groups’ second favorite race in the country, with Minnesota’s 7th clocking in at thirteenth. We now have close to final numbers in those races: According to the Center for Responsive Politics, the biggest players included the party committees ($7.8 million combined for the Democrats, $6.8 million for Republicans), the liberal House Majority PAC (more than $2 million) two Norm Coleman-led groups (the American Action Network and the Congressional Leadership Fund, which spent a combined $1.2 million), the National Rifle Association $965,000) and the U.S. Chamber of Commerce ($800,000). In sum, outside groups spent $21.3 million on those races, more than $19.3 million of which was negative, according to CRP,

Meanwhile, Minnesota’s Senate race wasn’t on any outside groups’ radar until the late stages of the campaign. According to CRP, outside groups spent $2.9 million on the race, most due to late buys from Democratic groups Alliance for a Better Minnesota ($1.6 million total) and Independence USA PAC ($513,000). For perspective, there were 12 $10 million Senate races, three $50 million Senate races, and one $80 million race, in North Carolina. Franken and Democratic-aligned groups spent $8.1 million on TV ads, more than doubling up GOP opponent Mike McFadden and Republican groups ($3.7 million), per an ad tracking service from the Center for Public Integrity.

McFadden had hoped to attract outside money to take on Franken and groups like the Chamber of Commerce indicated they were planning to spend on the race. That simply never happened — the airwaves were choked with money for U.S. House candidates instead.

7. Third-party candidates flounder
Minnesota is back to only having two major parties. None of the statewide candidates for the Independence Party managed to pass the 5 percent vote threshold needed to keep their major party status, a designation they first earned 16 years ago with the governorship of Jesse Ventura. Since then, IPers have been an important part of electoral politics in Minnesota. While none has won statewide office since Ventura, they always change the dynamics in the race. For instance, Republican-turned IP candidate Tom Horner earned 12 percent of the vote in the 2010 governor’s race and is regularly decried by GOPers for tipping a close race in the direction of DFL Gov. Mark Dayton. Some looked to Green Party attorney general candidate Andy Dawkins, a former state senator, to try and elevate them to third party status. In the end, Dawkins only garnered 1.49 percent of the vote. Maybe there’s some hope for the Legalize Marijuana Now Party — candidate Dan Vacek earned about 3 percent of the vote with no campaign operation to speak of.

By Devin Henry and Briana Bierschbach