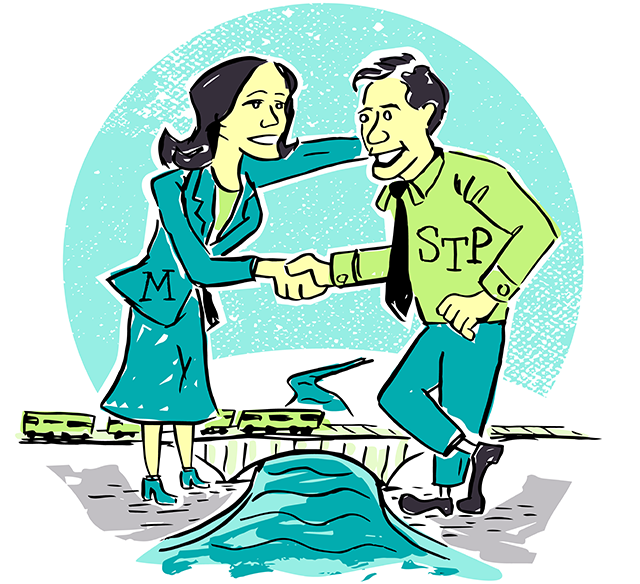 MinnPost illustration by Christopher Henderson
The detente between Minneapolis and St. Paul was put on grand display with the opening of the Green Line during which many riding free the first weekend admitting they hadn’t traveled to the other downtown in years.

1. Light rail prevails. It was a long time coming and arrived with seemingly unmeetable expectations. But the June 14 grand opening of the Green Line was cause for civic celebration and ridership has already exceeded expectations. Whether it has an equally impressive effect on development along the line is still to be determined, though signs are positive. Now the Met Council gets to do it all over again with the Green Line extension known as Southwest LRT. That line is already embroiled in protests,  litigation and worries about funding from both the state house and Congress.

2. Minnie and Paul get close. Could the historic sibling rivalry be at an end? It started with a post-election victory lunch between Minneapolis Mayor-Elect Betsy Hodges and re-elected St. Paul Mayor Chris Coleman. The comity was reprised during an especially gushing joint interview on MPR in which Hodges said one of the best things about Minneapolis is that it is next door to St Paul. Responded Coleman: “… for the record, Minneapolis is one of my favorite cities too.” (Hodges even devoted one day of her All-Star game “Brag Week” to St. Paul.) The detente was put on grand display with the opening of the Green Line during which many riding free the first weekend admitting they hadn’t traveled to the other downtown in years. Was this what the reunification of east and west following the fall of the Berlin Wall looked like?

3. Threats from above. Until one warm August evening, only the politically paranoid believed the federal government would molest its own people via unmarked black helicopters. Then came the swarm of just such aircraft into the downtowns of both Minneapolis and St. Paul, swooping over, around and between the buildings..  At one point, a copter flying low near Target Field coincided with explosions and bright flashes of colored lights. Since the only other explanation was a Twins homerun, most concluded the far-more-plausible explanation for the pyrotechnics  was a military attack on the city. Turns out, it was routine Navy Seals training long-known by some officials of the cities who had been restrained from informing the residents ahead of time.

4. Don’t tear down that house. Oh wait, go ahead. Residents of some of the nicer parts of Minneapolis didn’t like the spike in tear-downs of existing houses by builders who knew the lots could hold bigger and pricier homes. A short-lived moratorium in Southwest Minneapolis drew protests from builders and others who thought it interfered with markets. It did allow for clearer rules and expectations for builders and neighbors. One “tear down” that was endorsed by the new council, however, was the historically significant Healy House at 2320 Colfax Avenue S. The council overturned a denial of demolition by the Heritage Preservation Commission and over the objections of preservationists including  TV’s “Rehab Addict” Nicole Curtis. Curtis, who has relocated the show to her native Detroit, vowed on Facebook this month to work against the re-election of Council Member Lisa Bender because of her part in the decision.

5. It’s all about equity. During the Minneapolis city council public hearing on giving municipal consent to the SW LRT route, Mel Reeves of North Minneapolis pointed out the obvious: “I think you can’t come to Minneapolis without hearing the word ‘equity.’ ” So true. Equity, the catchall phrase that means addressing the difference in opportunities and outcomes between white and black, was a 2013 civic campaign theme, a centerpiece of both Hodges’ and Coleman’s state of the city speeches and August budget plans. Fittingly it was the subject matter for an end-of-the-year budget battle between Hodges and the city council — not over whether the city would address inequities, but how.

7. The polar vortex: When Minnesota residents were unable to visit Canada over the winter, our neighbor to the North decided to visit us instead. And then, as sometimes happens with out-of-town guest, Canada — or at least its air— stayed way too long. St. Paul Mayor Chris Coleman replaced his snow-removal boss in January amidst complaints that snow and ice weren’t being eradicated fast enough. Or at all. Both mayors featured the winter and their responses to it, in their budget addresses with Hodge pledging to enforce sidewalk shoveling, clear corners and even shovel bike lanes and Coleman commissioning an outside analysis of the city’s snow and ice removal.

8. Booze rules! The creation and expansion  of craft breweries in both cities has created a bit of an arms race (pints race?). Nary a week passes without an announcement of some new brewhouse in and around the cities. And now the craze is moving to craft distilleries with DuNord being the first to win permits for a cocktail room associated with its Longfellow distillery. In a related move, Minneapolis liberalized beer and win rules in neighborhood restaurants. Why the boom? Everyone wants to appeal to the latest civic battleground — millennials — who apparently do a lot of drinking.