It wasn’t to fund different programs, but rather to reduce the size of the property tax levy. The changes, passed despite a no vote from the council’s budget chairman — and despite a last-minute appearance at the budget subcommittee meeting by Hodges herself — would allow for a decrease in the levy from the 2.4 percent requested by the mayor down to 2.2 percent.

Proposed by Council Member Linea Palmisano, the complex amendment to reduce the levy carried thanks to the votes of veteran council members Kevin Reich, Lisa Goodman and Council President Barbara Johnson, along with those of new council members Blong Yang, Jacob Frey and Abdi Warsame.

But it wasn’t so much the levy change that was remarkable, to the point that it drew Hodges from her office, where she had been monitoring the debate. It was the way the council went about doing it: Several of the mayor’s key initiatives had been threatened, including the method by which she was planning to fulfill a campaign promise to address the city’s racial inequities.

And though there wasn’t a lot of money at stake with the levy move ($870,000 in a $1.2 billion budget), it revealed something important: that a city council sometimes viewed as politically monolithic — the current makeup includes 12 DFL members and one Green Party member — may actually cover more of a spectrum than it appears.

‘Ultimately, all of the money is the same’

“The biggest thing I’ve heard from our taxpayers, across the city and not just in my ward is that the full amount of property taxes can be unwieldy,” said Palmisano, who represents Ward 13, covering far southwest Minneapolis. She said her ward is near suburbs that have lower property tax levies. And her ward also has some of the fastest growth in home values, the types of properties that are seeing tax bill increases while other areas have enjoyed declines.

“I can’t tell you how many people have literally moved across the street because of how many less property taxes they will have to pay,” Palmisano said. “And I want to keep them in.”

But what might have been interpreted solely as a way to save taxes for wealthier residents at the expense of programs focused on poorer ones was contradicted by Palmisano’s allies in the move to cut the levy: Johnson, Yang, and Warsame, who collectively represent many of the city’s lowest-income neighborhoods.

Palmisano also had the backing of council veterans who came to her defense against a litany of criticisms from those opposed to the move — suggestions that it was naive, that it confused on-going spending with one-time purchases, that a lower levy for this budget could create revenue holes next time.

“Ultimately, all of the money is the same … whether it’s one-time or levy induced, it’s money sitting in a big pot and we can determine how it’s going to be spent,” said Goodman, who noted that the proposed amendment doesn’t contain budget cuts to any existing programs; it simply reduces requests by the mayor for new spending.

Backers of the mayor’s proposal made the case that the levy size is reasonable, and is needed to pay for basic services and important new efforts. Council Member Lisa Bender noted that fully one-half of city residents will see their tax bills reduced because their home values have increased less than citywide averages, and that the mayor’s budget would allow the council to “put its money where its mouth is” on issues like equity and the environment.

And, as Ways and Means Committee Chairman John Quincy pointed out, the cut would be so small that it would hardly create a windfall for most taxpayers: “This particular proposal just does not go to a point where it makes a significant impact on individual residents,” he said. As it passed, the savings were about $2.50 for the median-priced home ($180,000), leading to it being derisively labeled the #lattelevy on social media.

Differences emerging over how best to deal with equity issues

The debate also demonstrated differences in approach to what all members seem to agree on — that historic gaps in education, economics and health between whites and racial minorities are no longer tolerable, reopening a debate from two weeks earlier about the on-the-ground impact of the proposed war on inequity.

Back then, the topic was the city’s application for federal Promise Zone status for North Minneapolis, which some council members dubbed an exercise in talking rather than doing. This week, the touch point was the mayor’s proposal to create an Office of Equitable Outcomes, which would include two new hires and money for a Civil Rights Disparity Study.

“It’s very easy to sound sexy, to unload a bunch of fancy terms like ‘layering,’ ‘holistic’ and ‘collaboration’ without an end result,” said Frey, who supported the Palmisano levy cut. Instead, as he later proposed, he would increase money for the city’s Housing Trust Fund to help build affordable housing throughout the city, a move he thinks will help desegregate the city. He called it the difference between talking progressive and acting progressive.

Well into the committee meeting, Hodges took her seat on the council dais to defend the Office of Equitable Outcomes — and her budget plan in general.

“It was a year ago that many of us were elected on a platform of getting this work done, and it was almost a year ago when we all got together to set goals,” Hodges said in asking members to support two jobs in the equitable outcomes office rather than the one in Palmisano’s plan. 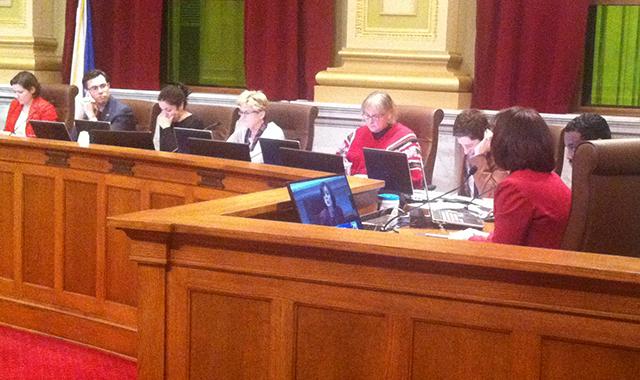 MinnPost photo by Peter Callaghan
Several of Mayor Hodges’ key initiatives had been threatened, drawing her from her office into chambers, far right.

Eventually, Reich voted to preserve both of the positions for the Office of Equitable Outcomes. But then he also voted to reduce the mayor’s budget request and, at the same time, the tax levy reduction proposed by Palmisano.

Are there two parties in the single-party Minneapolis Council? With one exception, those supporting the mayor in the levy fight had also supported Council Vice President Elizabeth Glidden in her attempt last year to become council president. Those voting for the Palmisano amendment, meanwhile, were the same members who voted to retain Barbara Johnson as president. The exception was budget chair Quincy, who voted for Johnson as president but for the mayor’s budget Monday.

A final vote will be held after a public hearing December 10. Amendments to what passed Monday can be made that night, including returning to the Hodges budget and levy. That’s what Council Member Cam Gordon pledged to do in a post-meeting blog post in order to restore $150,000 to staff a clean energy initiative that was cut. He might get a boost from news Wednesday that President Obama had named the city one of 16 “Climate Action Champions,” partly for its partnership with the energy companies to reduce greenhouse gases.

But in the face of the majority vote Monday, Gordon wasn’t planning to find money via the #lattelevy. That fight was over. Instead, he wrote that he would seek to reduce added money for convention center promotion.