A recent analysis of federal statistics comparing the buying habits of different metropolitan areas awarded the Twin Cities an interesting designation: We purchase more alcohol for home consumption than any other big city in the country, 45 percent above the national average.

So residents must drink more at home than when they go out, right? Well, no. The analysis, done by University of Southern California professor Elizabeth Currid-Halkett for the New York Times, found that Minneapolis-St. Paul also topped the list of the 18 largest metros in purchase of alcohol away from home, spending 62 percent more than other locales.

What this all means is subject to interpretation, but it seems to suggest that people like Shanelle and Christopher Montana might be on to something. They are two of a growing cadre of craft distillers taking advantage of newly modernized regulations and lifestyle trends to build a new industry — one bottle at a time.

The Montana’s Du Nord Craft Spirits wasn’t the first craft distillery in the Twin Cities. That honor went to Norseman Distillery in Northeast Minneapolis. But they will claim one superlative: They will open the first lounge in the metro area serving craft cocktails made with their own gin, vodka and — eventually, they hope — bourbon and rye. Sometime in early January, the lounge that is being carved out of a former Motoprimo motorsports store in Longfellow will be ready for customers.

The legal permission for distilleries to do more than simply offer product tastings was contained in the 2014 omnibus alcohol bill, which brought craft distilleries closer to the legal standing of Minnesota’s craft breweries. The Minneapolis City Council approved the license for Du Nord’s lounge earlier this month, and the final inspections and permits were expected this week amidst construction and the ongoing distilling of the Du Nord’s two offerings: L’etoile Vodka and Fitzgerald Gin.

“We are in a constant state of crazy here,” said Shanelle, holding their toddler Elijah while giving an impromptu tour.

The learning curve has been steep. In July of 2013, they announced the formation of Du Nord, named for the state motto (L’etoile du Nord or “The Star of the North”). Now, nine months after their first bottling, the Montanas are becoming lounge owners. “As soon as you think you know everything about production and distilling, suddenly you’re like, ‘And now, let’s learn how to manage a bar.’”

Christopher takes the lead on distilling, Shanelle on the sales and marketing, though a strict division of labor isn’t possible in a two-person operation. Together they arrived at the principals of their spirits — locally sourced materials purchased when possible directly from growers. Unlike some distillers who buy grain neutral spirits made elsewhere and then redistill it, they make their own base alcohol in house before crafting their final products. 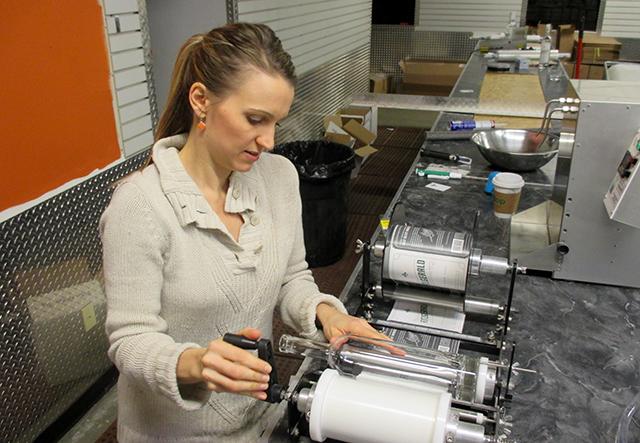 Standing over a large bin on corn, grown on the family farm in Cold Spring where Shanelle grew up, Christopher says, “this is where the fun begins.” Controlling the process “from grain to glass” sets them apart, he said. And this corn is special: It’s the first non-GMO corn grown specially for Du Nord by Shanelle’s parents, Mike and Mona Evens. During what he calls the Reader’s Digest version of the process he follows, Christopher outlines the science and craft behind the work. An English major who later earned a law degree from Hamline, he admits that, “I think I would have been much happier being an actual scientist.”

As if opening the new lounge wasn’t enough, in January Shanelle will also again lead lobbying efforts in St. Paul as president of the Minnesota Distillers Guild. Left out of last session’s omnibus liquor bill was the legal authority to sell bottles of craft spirits for off-premises consumption. The state’s distillers will try again in 2015. Such a change, already permitted in Wisconsin, would put distillers on par with craft brewers and especially wineries.

“You can go in, learns about the wines, taste the wines, have a glass and then walk out with a couple of bottles,” Shanelle said. That describes the experience she hopes to offer in the new lounge, except for the walking out with bottles part. Being able to sell direct to customers would not just be an important source of income, it would resolve cash flow problems that hurt small distillers. Taxes are paid when products are shipped to liquor stores and bars, not when the distillers get paid.

“That works if you have a lot of dough, but if you’re the average guy, it’s tough,” Christopher said. “You pay thousands of dollars in taxes right away but you won’t get paid for 30 days.”

The Legislature has been helpful, he said, but Minnesota is somewhat late to the craft spirits industry and its laws haven’t kept pace with many parts of the county. After the so-called Surly bill in 2011 lowered the license fee for micro distilleries (from $30,000 to $1,000), distillers were given authority to offer product tastings, and this year the cocktail lounge provision was passed. “It’s a slow march, but we’re getting there.” Christopher said.

The next boom? Minneapolis’ first ‘cocktail room’ set to open in January