One city council took 20 minutes, the other took five hours.

One city council reduced the mayor’s proposed budget, the other added to it in ways the mayor doesn’t like.

But by the end of the day Wednesday — barely — both St. Paul and Minneapolis had approved operating budgets and property tax levy increases to fund municipal operations beginning Jan. 1.

The Minneapolis budget was more controversial. More than 60 people testified during a marathon hearing that stretched until after 11 p.m. All but one of the speakers opposed reductions to Mayor Betsy Hodges’ $1.2 billion proposed budget, which were first adopted in committee last week.

Those reductions in new spending proposals were used to reduce the size of the mayor’s proposed increase of the property tax levy from 2.4 percent to 2.2 percent. The changes would have reduced spending on a clean energy partnership with private utilities; a program to promote leadership skills among minority residents; a study of racial inequities; and some money for homeownership counseling and outreach.

The changes are also what brought out the large number of residents who filled the chambers and spilled into the hallway and an overflow room. Because the reductions in proposed spending would have reduced the levy by a relatively trivial amount — $2.50 for the $180,000 median-valued home — opponents dubbed it the “latte levy.” Some held up paper coffee cups as a symbol.

During a recess, some of those attending returned to the chambers and — in call-and-response fashion — chanted a warning to those who might vote to retain the reductions.

What followed was a fascinating and sometimes hard-to-follow meeting, complete with tortured parliamentary procedures and emotional exchanges between members of a suddenly divided council. When it came to council comity, it got worse before it got better, thanks to two members who moved to reduce the levy even further — down to 2.1 percent. That meant even deeper spending reductions would be needed.

Council Member Andrew Johnson reacted to the additional levy cut in a manner fitting for the theme of the night: “I appreciate that my latte is going from a grande to a venti,” he said.

But a subsequent motion by Council Members Blong Yang and Abdi Warsame walked back some of the reductions passed the previous week to the clean energy partnership, the leadership program (known as One Minneapolis) and the homeownership counseling program.

It wasn’t all that opponents or Hodges wanted, but it had the effect of calming the objecting council members, if not most of the residents who attended the meeting. While the mayor lamented the cuts, she said the budget — which eventually passed 12-1 — did many good things and credited residents in attendance for impacting the outcome. She cited new staffing to create an Office of Equity Outcomes; the purchase of body cameras for city police; the clean energy initiative; the start of household organics recycling; money for protected bike lanes; and the city’s share of the Nicollet Mall renovation.

Just because the meeting was over quickly didn’t mean St. Paul’s budget came without conflict. With little discussion, the council gave final passage to a $515 million operating budget and 2.4 percent increase in the property tax levy. The budget vote was 7-0. The levy vote was 6-1, with Council Member Dan Bostrom voting no.

Afterward, Council President Kathy Lantry noted that the vote was a super majority, a fact that became important later in the afternoon when Mayor Chris Coleman said he would veto the one section of the budget that presented the major difference between his proposal and the council’s.

That threat resulted from a dispute over how to pay for a council priority of restoring library hours cut during the Great Recession. Coleman had proposed adding back Sunday hours at the Merriam Park Library, but the $400,000 added by the council went further: restoring evening hours on Tuesdays and Thursdays at other branches. 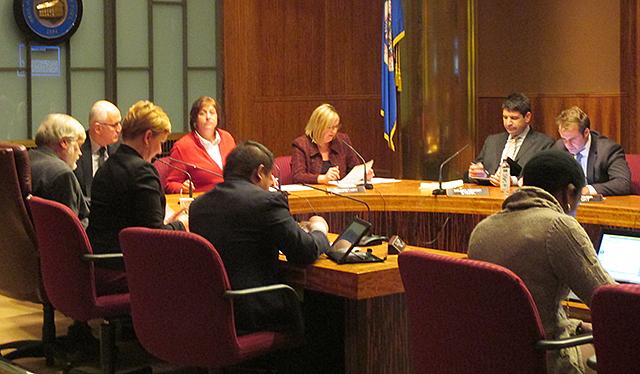 The council members paid for that addition by changing the funding source for repairing and maintaining parking meters. They voted to take the money from the parking fund, rather than the general fund. That freed up money in the general fund for the library hours.

“We have said very clearly since September that a priority for this council is to increase library hours and the reason is we know that some of the biggest users of the physical library plant are kids between the ages of 14 and 21,” said Lantry. “If you want to reach those kids who are most vulnerable, then you have a library that’s open when the kids are available to use it.”

“No one has invested more in libraries than I have,” Coleman said. “But a bedrock principle of mine is structural balance. On-going revenue should pay for ongoing expenses.” But the council funded the additional hours with so-called one-time money – accumulations in the parking fund. That means that to continue the spending the following budget year will force budget writers to find that money somewhere else.

“It feels good in the short term but causes problems in the long term,” Coleman said. He has five days to send a veto message to the council, which will then have 30 days to react. But because the budget kicks in Jan. 1, the council is expected to take up an override at its meeting next Wednesday.

The budget includes several of Coleman’s initiatives, including adding paid parental leave for city employees alterations in street reconstruction to give more money to arterials and funding to repair the so-called “Terrible 20,” the cities most-damaged roads. It maintains the number of police officers and firefighers.