Those who were hoping a new Nicollet Mall would finally reconnect downtown Minneapolis’ two pedestrian worlds — that of the sidewalk and of the skyway — will have to rely on something other than a set of public stairways to make that connection:

At a presentation of the latest designs for the $50 million redo of the city’s nearly five-decade experiment in giving pedestrians a fighting chance, planners said that a proposal to have stairways between a skyway and Nicollet Mall near 7th Street S. were not practical.

David Frank, the city’s director of transit development, said the design got negative reviews from property owners and businesses as well as Metro Transit, the Downtown Improvement District and maintenance crews. “The stairs would be challenging to figure out, challenging to operate,” Frank said. “The businesses and property owners saw it as invasive and something they were not sure they could support.”

So what now? In addition to a new design that Frank called “better in almost every way,” the project planners will rely on “wayfinding.” That’s an architect’s way of describing signs aimed at directing folks in the skyways over Nicollet Mall to existing stairs and elevators inside adjacent buildings that lead to the ground level. 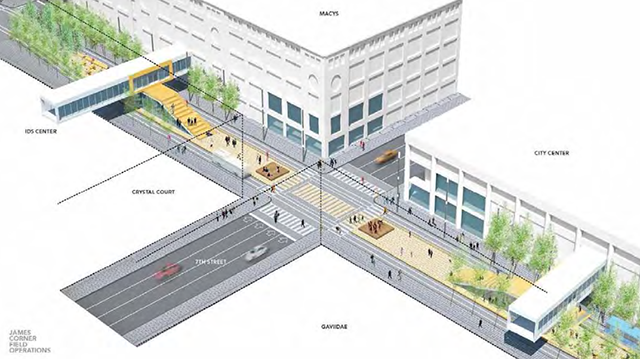 Courtesy of James Corner Field Operations
Previous designs featured stairways down from the skyways to the street level.

Disappointing, perhaps, to those who hoped to reimagine the skyway’s relationship with street-level activity. But ridding the plan of the grand stairways that descended down to the mall liberated the designers to do something different with the project’s central section. What had been designated as “The Island,” the two-block stretch of the mall from 6th Street South to 8th Street South, is now called, well, “The Center.”

“Seventh Street, as we all know, is not a great location at the moment,” said lead designer James Corner. “But we do believe that we should turn what is presently a sort of negative liability into a positive asset.”

For that two-block section, the bus lanes will be straightened, eliminating completely what Corner called the “Halprin Curves,” a reference to initial Nicollet Mall designer Lawrence Halprin, who in 1967 created a curved roadway that snaked its way down the right of way.

What Halprin once called “the urban dance” was straightened somewhat during a 1990 renovation, a change he complained about. Now, at least along the blocks in the “The Center,” the curves will be eliminated completely.

Corner said those blocks will instead be marked with two sidewalk strips on each side of the street. Half of the width of each would be devoted to what he called The Art Walk and The Light Walk. The Art Walk on the west side of the street will feature a line of mature trees pruned high to create spaces beneath for sitting and artworks. The Light Walk on the east side will have a long trellis with slanted mirrored panels, or fins, above. 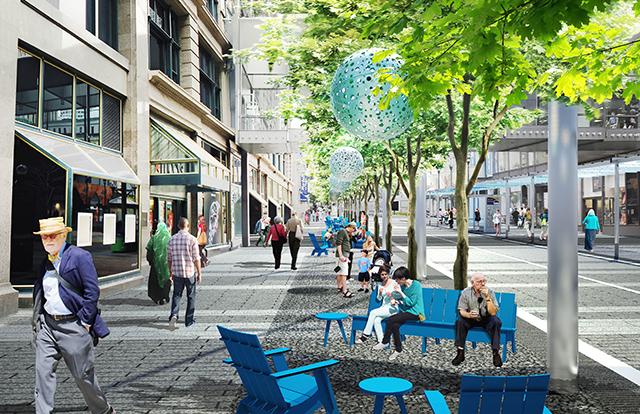 Courtesy of James Corner Field Operations
The Art Walk on the west side of the street will feature a line of mature trees pruned high to create spaces beneath for sitting and artworks.

“When you are walking north … you will see yourself in the mirrors above and you will see other people,” he said. “If you are moving south, you will see the sky.”

The space beneath the trellis can be configured as seating, as stalls for the farmers market or even for linear features like a bocce court in summer or an ice sheet for curling in winter.

“We see these as the primary devices to bring light and activity to these two blocks but also to be the carpet around which future programming activities can be organized,” Corner said. 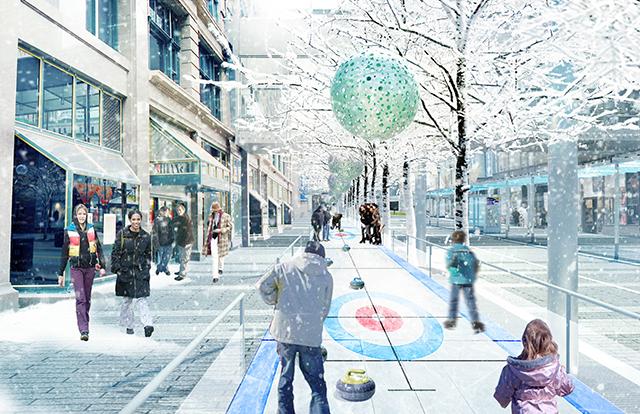 According to the project timetable, public and private utility work will go on in the second half of 2015 with actual mall reconstruction beginning in early 2016 and lasting for much of the year.

Minneapolis Mayor Betsy Hodges told the meeting that she had signed the 2015 budget that morning. It contained the city’s $3.5 million share of the project. In the spring, the state Legislature included $21.5 million for the plan. The final $25 million is to come from assessments on property adjacent to the mall.

One of the awkward issues facing mall planners is how to deal with street people and the homeless who often congregate in transit shelters and seating areas. Steve Cramer, president and CEO of the downtown council, said the subject goes by the euphemism “liveability,” or “how does it feel to be on Nicollet Mall.”

“There’s a sense that everyone is welcome on the mall, obviously it’s everybody’s downtown, but everybody else has a right to expect a certain level of behavior from everyone,” Cramer said. “And to the extent that there are folks on the mall who are facing challenges in life, we as a community rise to the challenge and find the resources for those folks.” 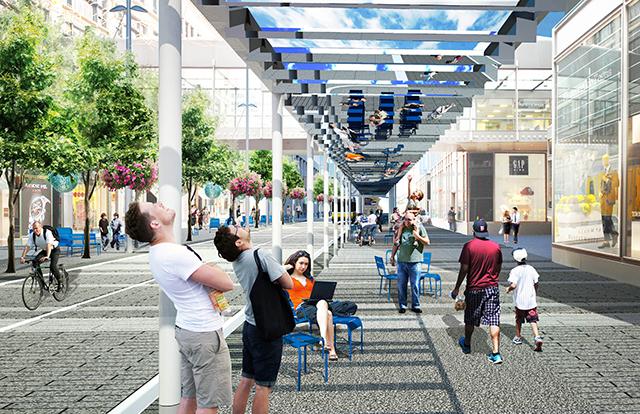 Courtesy of James Corner Field Operations
The Light Walk on the east side will have a long trellis with slanted mirrored panels, or fins, above.

One strategy is to extend the hours of area shelters and create daytime activities so people can go somewhere else than the mall. Bus shelters are being redesigned as well to more open and transparent. There will also be an extensive public education campaign to discourage giving to panhandlers.

Other highlights of the Thursday’s community briefing:

More renderings of the new designs are available at the project’s website.

From wayfinding to The Art Walk: a look at the latest designs for the $50 million remake of Nicollet Mall