It seemed like things were turning around in Minnesota. It was the tail end of an economic recession, and revenue numbers were coming in way above projections. In St. Paul, lawmakers were prepared to head back to the statehouse. Democrats controlled the state Senate and the governor’s office, but a new Republican-led caucus was heading into the majority in the House after railing on DFL tax-and- spend policies in the last election.

And though it had been years since Republicans had a foothold in state government, they promised to work together with Democrats in control of the other levers of state government.

Now, 30 years later, a very similar dynamic awaits Minnesota lawmakers heading into the 2015 legislative session. Republicans won the state House from Democrats this fall, but Democrats still hold control over the Senate and the governor’s office. Gov. Mark Dayton, Senate Majority Leader Tom Bakk and Speaker-elect Kurt Daudt are all promising to work together. And as in 1985, Minnesota’s economy is on the mend. The unemployment rate is at its lowest point in years, and the state has $1 billion extra in its coffers to spend.

The similarities between then and now are so striking, in fact, that Bakk has made it a personal project to research the 1985 and 1986 legislative sessions ahead of the upcoming session, which starts Jan. 6.

But he’s not just interested in simple comparisons — trying to study the secrets of success from those sessions. Rather, he’s looking to learn how all that talk of harmony so quickly fell apart.

The reign of ‘King David’

When the then-Independent Republican caucus took the majority from Democrats in the 1984 election, it was a significant victory. Conservatives had not had outright control in the lower chamber in 12 years. For their leader, the caucus picked three-term Rep. David Jennings, a 36-year-old carpenter from Truman, to lead the Republicans first House majority caucus in more than a decade.  “He was a tall man with a deep voice and he was fairly charismatic,” said Gene Lahammer, a former longtime state Capitol reporter for the Associated Press.

Jennings had a thin 69-65 majority in the House and knew it wouldn’t take much for minority Democrats to peel off votes if his caucus was fractured, and he faced a test of his power early on. He had proposed an unprecedented 4 percent cap on spending increases over two years, a move Democrats blasted as too low and unnecessary — even while the more conservative members of Jennings’ own caucus said the cap was too high.

But after several caucus meetings, Jennings convinced Independent Republicans to support his position. After that, he had unprecedented control over his caucus. A Star Tribune article from the time called the caucus’ unity “a rare legislative phenomena.”

Emboldened, Republicans pushed forward with an agenda that called for $1 billion in property and sales tax cuts and a 20 percent cut in personal income taxes. Perpich wanted a smaller cut in personal income taxes and an overall tax reform package that would cost about $600 million. DFL legislative leaders like Sen. Roger Moe, a 40-year-old teacher from Erskine who was then heading into his third term as majority leader, preferred a figure even smaller than the governor or the House was proposing.

Republicans were also pushing to take so-called “employable people” off of general assistance, a proposal that was the start of a two-year fight over welfare funding in the state. The move irked Perpich, who famously said “I would cut off my hand before I would sign that bill.” The state government funding bill was also tripping up some lawmakers because it included an automatic pay increase for legislators, who made just over $21,000 a year at the time.

After marathon conference committee meetings in May of 1985 to try and reconcile their differences on various proposals, the clock ran out on the legislative session. That forced Perpich to call legislators back for a special session to finish their work. Lawmakers had to set the budget by June 30th or the state’s bank accounts would freeze up.

Leadership met off and on for weeks until they came to an agreement. Perpich called lawmakers back into session on June 19, and it took three days to pass all of the proposals they needed to. In the end, lawmakers passed a more than $10 billion state budget bill — with pay increases — and cut taxes by nearly $900 million, at the time the largest tax cut in state history. When it came to general assistance, Democrats won. Most people remained on the program while some were shifted to job assistance programs.

Jennings left the session with an air of confidence about the power his new conservative majority caucus. “It was important for us to show that we could run the House and to, if not deliver on all our promises, at least come close to it,” he told the Star Tribune at the time. “We’ve done that.”

A deficit and a farm crisis

The good times didn’t last long. By the time lawmakers gaveled in the 1986 session, they faced a projected $734 million budget deficit and a farm crisis. Farm values had fallen 26 percent in the first six months of 1985, according to a report from the University of Minnesota.

Democrats and Republicans quickly veered in opposite directions in terms of how to solve the problem. Perpich proposed to pay down half of the shortfall out of the state’s budget reserve and the rest by cutting state expenditures. That included cuts to some property tax relief and education aid. 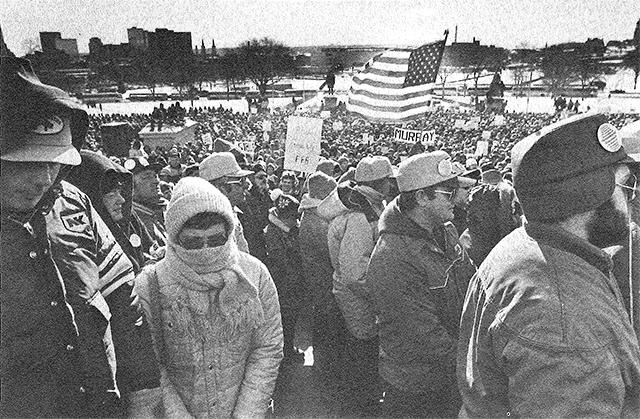 Session Review: Vol. 11, No. 2
About 10,000 rural Minnesotans arrived at the state Capitol in January 1986 to rally lawmakers’ support for farm relief proposals.

Their positions put Democrats in a tough political spot: They were proposing to cut property tax relief and education funding while Republicans were going after welfare recipients and economic development programs, which were far less popular. “Republicans have us in a box,” an anonymous House DFLer told the Pioneer Press in 1986. “Politically, they’re on the side of the angels.”

But Democrats decided to publicly fight the welfare program cuts. Perpich called their budget balancing bill “anti-the unemployed, anti-family, anti-rural Minnesota and anti-job.” Childrens’ advocates flooded the Capitol to implore Republican legislators to vote against welfare cuts. Newspaper headlines focused on the impasse over the welfare cuts, which amounted to only about $30 million of the total state budget.

In mid-March, after 18 hours on the House floor and marathon conference committee sessions, Jennings called for the House to adjourn sine die. Members were outraged. As Jennings called for adjournment, Jim Rice, a 60-year-old DFLer from Minneapolis, shouted “Heil, hitler!” Dave Bishop, an Independent Republican from Rochester, yelled “you are the most arrogant speaker I’ve ever served under, Jennings!”

At the time, Moe predicted the swift adjournment would play poorly for Republicans in the upcoming election. “I think he’s going to end up with a lot of egg on his face by walking away without getting his work done,” he told the Star Tribune at the time. 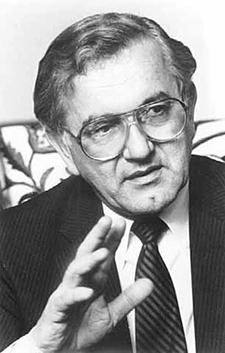 The Senate adjourned three days later, and Perpich was furious. He quickly called a meeting with Moe and Jennings and offered a compromise: the welfare cuts had to come off the table, but he would call a special commission to look into the issue later.

Perpich called lawmakers back for a one-day special session in April to enact the agreements they had reached, which amounted to $175 million in savings achieved through various tax changes and cuts to K-12 and higher education and higher education. The rest of the cuts were left up to Gov. Rudy Perpich’s administration via unallotment, a budget balancing tool that gives the governor authority to unilaterally make cuts. He mostly trimmed off state government budgets to balance the budget.

The two years in power took their toll on Jennings, who decided to retire from the Legislature after the 1986 session (though he changed his mind about retiring and was briefly in the mix for the 1986 governor’s race). Later that fall, Republicans lost majority in the House and Perpich won re-election to the governor’s office, leading to all DFL control again in state government. “Republicans overplayed their hand,” Lahammer said. “They were a little over confident.”

Looking at the situation today, lawmakers and political observers concede that there are similarities between the two sessions 30 years apart. But they also point to all the major differences in the personalities that will be running state government.

For starters, all three of the current leaders have worked together over the last two years, Moe said, so there’s familiarity and trust already built up.  “All the personals are all different this time,” he said. “This process is very much a human process.”

While Moe and Bakk both had reputations as master negotiators in St. Paul, those who worked with Jennings say he couldn’t be more different than Daudt. “David was called, sometimes affectionately and sometimes unaffectionately, ‘King David,’” said Steve Sviggum, who served in the Independent Republican caucus under Jennings and later as Speaker of the House.

During Sviggum’s tenure as speaker, he created an executive committee within the caucus to dull the ultimate power Jennings had in the position. That could be a key distinction between Jennings and Daudt, Sviggum added. “Daudt has the executive committee to answer to, and he has a completely different personality and completely different attitude toward governing,” he said. “He’s more interested in cooperating and getting along with people.”

And while Gov. Dayton considers Perpich a political mentor — he actually worked in Perpich’s administration during the 1985 and 1986 sessions as head of economic development programs — Lahammer says they govern with vastly different styles. “Perpich was a grandiose governor, almost bigger than life. He was a dealmaker and a product of state government,” Lahammer said. “Dayton is much more of an introvert and has had a more varied career.”

The biggest challenge during those two years for Perpich, as Lahammer recalls, was trying to negotiate with a Republican caucus that didn’t want anything. He said Dayton and the incoming House Republicans could deal with a similar challenge. “Perpich’s style of dealmaking clashed with the new mentality,” he said. “They wanted less and Rudy negotiated in the way of, ‘You give us this and we’ll give you that.’ You’ve got to assume that one side wants something. The House Republicans wanted less of everything.”