The public is the biggest winner under a final agreement between Gov. Mark Dayton and top legislative leaders on the layout of the restored Minnesota State Capitol.

The Capitol is currently in the middle of a $273 million, three-year restoration project. In an agreement reached between the governor, Republican House Speaker Kurt Daudt and DFL Senate Majority Leader Tom Bakk late Wednesday night, state senators will have fewer offices in the Capitol to make way for things like a new public library, public meeting rooms and space for House members to meet with their constituents and other citizens.

That won’t be the only new space allotted for the public when the 109-year-old building opens back up for business. A handful of other public spaces were already approved in the original Capitol remodel:

Leaders stalled last week after hours of negotiations on how space would be divided. At the heart of the disagreement was how much of the new Capitol should be taken up by legislative offices versus public space. State senators currently have 39 offices in the Capitol, but they will only have four offices when the building reopens.

Senators will move almost entirely into a new office building currently under construction on the north side of the state Capitol. The building has been a source of controversy since the Senate inserted the project in the 2013 tax bill. Republicans have criticized the new building as a waste of taxpayer money and railed on the project on the campaign trail last fall.

But at a meeting of the Capitol Preservation Commission on Thursday, Bakk said there wouldn’t be as much public space in the remodeled Capitol without the new building. “The Capitol would permanently be a Senate office building if it weren’t for that project across the street,” he said.

Space in the new building will now be almost equally divided up between senators and House members, but Speaker Kurt Daudt said there will be no offices for any representatives in the Capitol.

“The House’s priority was to secure space for the public in their Capitol,” Daudt said in a statement. “The space allotted to the House will be used for public meeting rooms, conference rooms for members to meet with the public and for staff work space when the House is in session. The House will not have any member offices in the Capitol.” 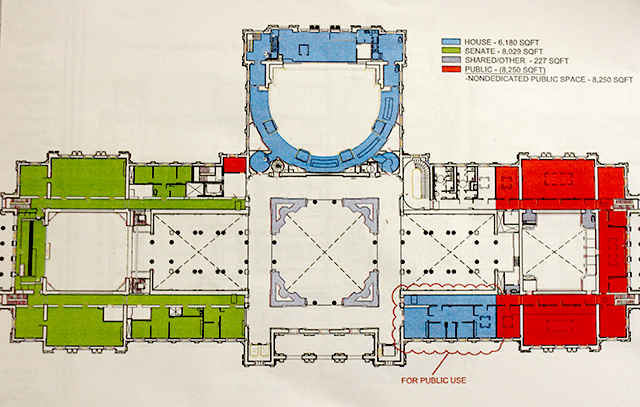 MinnPost photo by Briana Bierschbach
Public space allocation in on the third floor of the Minnesota Capitol.