On Tuesday, the opening day of the 2015 Minnesota legislative session, Democratic Senate Majority Leader Tom Bakk cautioned his fellow lawmakers to be patient. If tempers flared, he said, count to 10. Breathe.

Bakk wasn’t talking about the daunting to-do list facing lawmakers, or even the prospect of working with the new Republican majority in the House. No, Minnesota lawmakers have looked divided government in the face — and found something even scarier: the restoration of the crumbling Capitol building.

The $273 million, three-plus year project recently entered into a particularly messy and inconvenient phase. Two-thirds of the building will now be shut off from the public for the first time ever, including the historic rotunda.

The problem is so big, that legislators like Bakk aren’t completely dismissing an idea that would be unprecedented in Minnesota politics: finishing all legislative work for the next biennium in just one year, meaning there would be no 2016 session. This has never happened — even under one-party control —  since the constitution was changed in 1973 to switch to the two-year system. For nearly 100 years before that, lawmakers only met on the odd-numbered years, according to the Minnesota Legislative Reference Library.

But both Bakk and House Speaker Kurt Daudt admit skipping the 2016 session is very unlikely. It would make for a busy next few months for any legislature, but especially one that’s newly divided. The major projects on the docket for the next two years include crafting a $40 billion budget, passing a major package of construction projects and finding a fix for the state’s dilapidated transportation system. (Gov. Mark Dayton used an annual early-session dinner hosted by the Minnesota Chamber of Commerce Wednesday night to exhort business leaders to support raising about $6 billion in additional funding for transportation improvements over the next 10 years.)

Yet proponents of the two-sessions-in-one approach, like Senate Minority Leader David Hann, believe the extraordinary circumstances merit unusual measures. And the circumstances are different: the usually pristine Minnesota state Capitol building is encased in scaffolding and sheets of plastic wrapping stretching seven stories high, the Capitol’s grand marble staircases are walled off with sheetrock. Parking spots and restrooms are in short supply. And the problem is ongoing: the number of conference rooms available has already been cut in half, and next session the Senate chambers will be closed off.

Even amid the pomp and pageantry of the opening day of session, several Capitol inhabitants were preoccupied with where to wash up after using the building’s new outdoor port-a-potties (for the record, there is a washing area, but the water might have been frozen in the sub-zero temperatures).

“It’s one thing to be hearing about it, and another thing to see it up close,” Curt Yoakum, spokesman for the Minnesota Department of Administration, said of legislators’ first-day-back reactions. 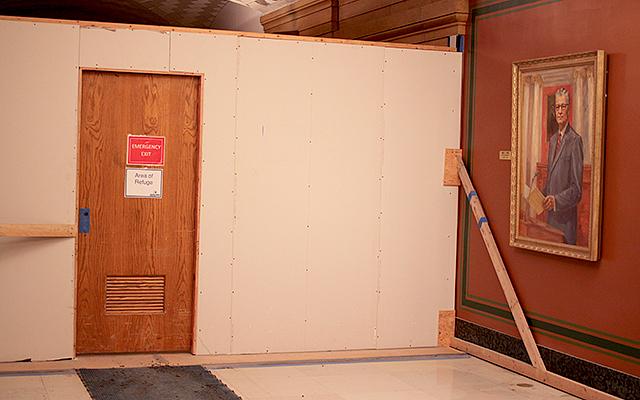 There are other factors contributing to legislators early focus on the Capitol building — and not the issues facing them this session. After years of repeated budget deficits, legislators have an extra $1 billion on the bottom line to make their jobs a little easier, even if that number isn’t quite as big as it seems.

And leaders like Daudt have gone out of their way to make a collaborative overture to Democrats in the early going. “I didn’t talk about a lot of issues here because I want to make sure that … we get off to a good start,” Daudt said shortly after he was officially elected Speaker of the House Tuesday. “I’m very sincere when I say to my colleagues on the other side of the aisle and our Democratic governor Dayton that I want to work with them and I want to solve these problems.”

Differences will become more clear Thursday, when the Senate DFL majority and House GOP majority each plan to introduce their first bills, a symbolic tradition that lays out the parties’ respective priorities for the session. But even there expect to see some harmony — both parties say at least some of their first bills will focus on improving greater Minnesota.