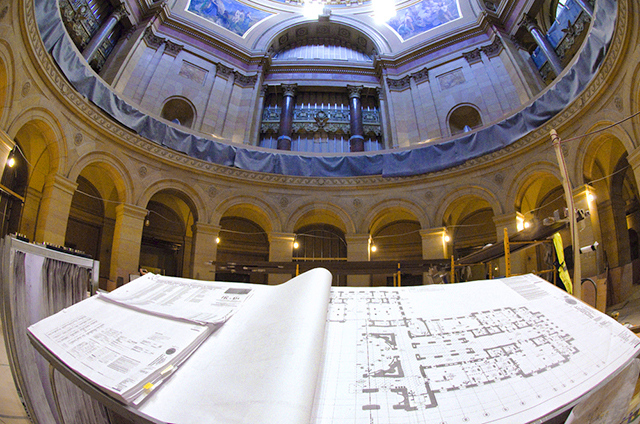 Photo by Tom Olmscheid/Workingpress Photo Agency
Architectural drawing are displayed on a bench in the Minnesota Capitol rotunda.

Each year, the Minnesota State Capitol plays host to 201 state legislators, an attorney general, a governor, roughly 370 events, 13,000 tours and 120,000 public visitors. And that doesn’t even include the countless others — staffers, lobbyists and reporters — who work year-round inside the building.

Now, consider another figure: 109. That’s the age of the dilapidated structure.

The wear and tear on the building over that time has resulted in the need for a massive $272.7 million project that’s currently underway to restore the state’s premier political landmark. And over the next two years, the project will be in a particularly messy phase: most of the building will be closed off to legislators and the public, as construction crews repair mechanical systems, fix crumbling marble on the building’s facade and work to restore the landmark back to its original glory.

Still, many aspects of the project remain a mystery to people who don’t regularly roam the Capitol halls. Among the frequently asked questions: Why does the project cost so much? How much public space will there be when the building reopens? How different will the Capitol look when all is said and done?

Here’s what you need to know about the restoration of the Minnesota State Capitol, a project 30 years in the making:

Is the Minnesota State Capitol really that special?
Yes, the Minnesota State Capitol really is above average. Designed by Cass Gilbert, the 378,825 square-foot building has been an architectural darling since it opened on January 2, 1905. It was immediately hailed as one of the country’s finest public buildings, and today it still holds the reputation as one grandest statehouses in the nation. Some of it’s most impressive features include the second largest self-supported marble dome in the world, and “Progress of the State,” the gilded statue of a chariot pulled by four horses — also know as the “Quadriga” —that sits above the building’s main entrance. The Capitol is made of 16 kinds of marble from around the world, as well as Minnesotan limestone and granite.

If the building is so great, why is it only being restored now?
The short answer: politics and inconvenience. Architects and historical experts have spent 30 years studying and preparing designs for restoring the Capitol, but legislators were hesitant to evacuate their offices and set aside the large chunk of public money that was needed to get the project started. A patchwork approach to repairs was taken for years. When a pipe would burst, funds would be allocated to repair damages to historical paintings or mechanical systems. Stone on the outside of the building went through a deterioration process called “sugaring.” Some architectural elements deteriorated so badly that they had to be replaced wholesale.

Eventually the problem became too hard to ignore. A few years ago, a large piece of stone fell off the crumbling building and became something of a mascot for the restoration project. In 2011, the Minnesota Capitol Preservation Commission was formed. A year later lawmakers dedicated $37.4 million to the project in the 2012 bonding bill. That was followed by $109 million in 2013 and $126.3 million in 2014. Work began in the fall of 2013.

Why does it cost so much?
Infrastructure replacements don’t come cheap. Much of the work is repairing outdated mechanical and electrical systems, which will eat up about $80 million of the budget. That’s on top of new plumbing, roof replacement and stone repairs on the outside of the building. “There’s hardly a pipe or anything else building that’s not going to be new,” said Rik Myhre, senior project manager with JE Dunn, the construction company leading the restoration. And everything is being done with historic preservation in mind. On the outside of the building, construction crews are working with Georgian marble from the Minnesota quarry used in the original construction of the building. On the inside, workers are trying to salvage pieces of original marble from the Capitol’s restrooms, as the original Tennessean marble costs too much to fit into the project’s tight budget.

How different will the Capitol look post-renovation?
The nature of restoration work — if done correctly — is that it shouldn’t be noticed. That includes repairing historical lighting fixtures, fixing marble and re-touching up paint. But there were stunning original features to the building that were changed over the last 100 years that are now planned to come back. The most notable: public elevators with clear glass doors on the front and the back. Construction crews also found several skylights on the third floor of the building that were covered at some point during its 100 year history, and they plan to open up other areas of the building that were closed off and turned into offices at some point. One (welcomed) exception to the restoration rule: the original building didn’t have women’s restrooms because only men were included in the political process back then. As construction crews are repairing the original restrooms to the building, they are also building matching women’s bathrooms.

What about space for the public?
Politicians readily make references to the Capitol as the “people’s house,” but the space hasn’t been optimized for public use for years. The public can meet with their legislators, rally in the Rotunda and eat in public cafeteria — but that’s about it. The newly restored Capitol will have more space for the public. A new, basement-level public meeting room has been added, as well as additional dining space in the cafeteria for visitors. The Minnesota Historical Society, which used to be housed entirely in the Capitol building, will also get a new public classroom to provide information about the building. The new Capitol will also be fully accessible to people with disabilities.

What about the Capitol’s paintings?
The Capitol is home to many murals and historical paintings created by prominent early 20th-century artists, but restoring the building’s fine art wasn’t included scope of the restoration project. The Minnesota Capitol Preservation Commission recently set up a separate panel to put together a set of recommendations to deal with the fine art portion of the project. That group, led by former Minnesota Supreme Court Justice Paul Anderson, state Sen. Dave Senjem and Rep. Diane Loeffler, will draft recommendations to not only restore the (sometimes offensive) current Capitol art, but also put together suggestions on commissioning new art for the building that would encapsulate the spirit of the North Star State. 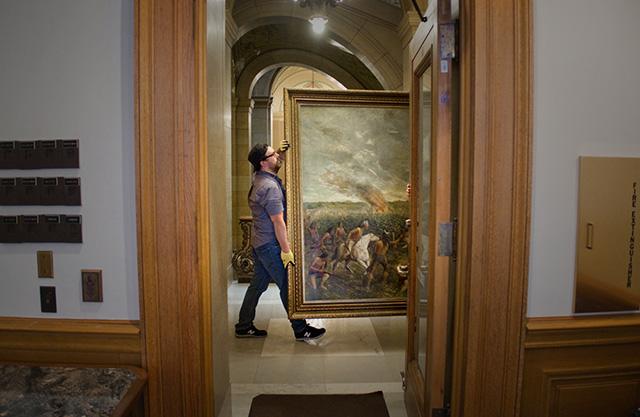 Photo by Tom Olmscheid/Workingpress Photo Agency
ArtServe employees removed the 82 x 106 inch painting of the “Attack on New Ulm” by Anton Gag to be crated for storage in May of 2014.

So how did a renovation project become political?
Each step has required some kind of approval from lawmakers, and not everyone has agreed on the best way to handle the messy project. First, lawmakers had to be convinced to fund it. Now, space issues have complicated matters. Senators, who office in the Capitol and will be most inconvenienced by the restoration, managed to pass a proposal in 2013 for a new office building to house them both during and after the restoration project. That idea was opposed by Republicans and turned into a campaign issue. Now, who resides in what space in the restored Capitol has delayed approval of the next phase of work on the project, though an agreement is expected by lawmakers this week.

When will the project be finished?
As of now, the Capitol is on schedule to be fully reopened for the 2017 session, with some minor restoration work continuing until later that year.

Could the cost go up?
Technically the project has been fully funded, and there are still some contingency funds available for any unexpected surprises, said Wayne Waslaski, director for real estate and construction services for the state Department of Administration. There are no additional costs expected unless the “scope of the project” changes, he said.