Driving in downtown St. Paul can be challenging, what with the one-way couplets, odd angles, erratic numbering and key arterial streets being interrupted by buildings.

The city has a fledgling network of bike trails and designated routes in neighborhoods surrounding downtown. But once those routes reach the city’s core, there’s little help for the cyclist. The faint of heart and the weak of limb tend to steer clear.

“There are a lot of great trails that come up to the periphery of downtown,” said Jessica Treat, executive director of Saint Paul Smart Trips, a nonprofit that advocates for sustainable transportation options.  “Then they end, and you’re on your own.”

“It’s a real challenge to get into and out of downtown,” said Planning Commissioner Bill Lindeke (who, full disclosure, is a regular contributor to MinnPost, writing our Cityscape column).

That’s why one element of the city’s St. Paul Bicycle Plan is borrowing an idea pioneered in Indianapolis: a downtown bike loop with protected bike lanes that give bicyclists their own space.

The loop — part of a comprehensive bike plan begun in 2012 and expected to go before the city council this spring — would take an oval path through the core and connect to already established routes on its edges. It would likely start on Jackson Street, which is already budgeted for an $8 million rebuild, and by bounded by either 10th Street or 11th Street to the north, either Saint Peter or Wabasha Street to the west and either Kellogg Boulevard or 4th Street to the south.

This wouldn’t just be some painted lanes in the streets. The plan calls for separated, off-street paths that could accommodate two-way bike traffic even on streets that are one-way for cars. The estimated price tag: $18 million.

“People who are comfortable riding a bicycle on off-street paths in other contexts will find these facilities familiar and attractive,” the draft plan states. The loop would be within a few blocks of most of downtown and would connect sites like the Xcel Center, the Ordway Theater, the museums, the farmers market, the new Saints ballpark and Union Depot.

But the new lanes come at the expense of something else: curbside parking. In most iterations, one lane of parking would be lost to accommodate a bike path; estimates of how many range from 100 spots to half that.

Opposition — and support — from the neighborhood

The parking issue is contentious, due in no small part to perennial worry that the loss of spaces in front of stores will result in lost business. “Please do not ruin the little retail you have downtown,” wrote Douglas and Brenda Lamb, owners of Candyland on Wabasha, in a letter to the Planning Commission last month.

In fact, it’s such an issue that the CapitolRiver Council, the neighborhood council for downtown St. Paul, has opposed the bicycle plan if it takes out too much parking. The council has urged the city to await the result of a downtown parking study before deciding whether to take parking lanes for bike paths. And this week, critics of the current plan released a petition signed by two dozen retailers and building owners opposing any loss of street parking.

Yet other downtown business interests think the benefits of the loop will outweigh any potential burdens. “It’s not necessarily going to be a smooth process,” said Joe Spartz, president of the Greater St. Paul Building Owners and Managers Association. “There will be winners and losers with anything.”

“We know that — on its own — it’s not a game changer,” Spartz said. “But it is one component to drive growth and to create a more active downtown.” 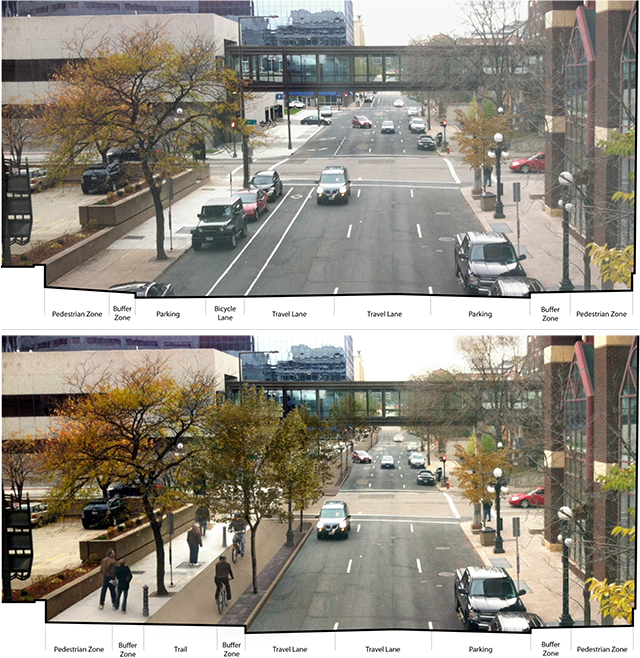 Department of Public Works
The plan calls for off-street bike paths that could accommodate two-way bike traffic even on streets that are one-way for cars. A before and after rendering of Jackson Street is shown.

That active street life is important in attracting more people downtown from two key demographic groups, empty nesters and Millennials. As is having more people live downtown, a central tenet of downtown redevelopment hopes. Compared to downtown Minneapolis, St. Paul has half the jobs and one-fourth the residents, Lindeke said.

Rather than take a cautious approach, the signators of another letter — this one supporting the plan — are asking the city to “think bigger.” Because any route would have some impacts on businesses, the final alignment should be chosen to maximize return on the city’s investment. “By focusing the Loop’s route on maximizing return for retail development, as well as bike and pedestrian comfort, the city will significantly increase the development opportunities available to local businesses,” noted the letter, which was signed by Spartz, St. Paul Chamber of Commerce President Matt Kramer, and Tony Bol, board chair of Wabasha Partners and the former director of performance programing for MPR.

The city’s planning staff compiled 550 comments about the current draft of the plan and reported Monday that most are supportive. In a report to the planning commission’s Transportation Committee, staffers said they are not recommending any major changes. Staff said a downtown parking study will be completed before implementation of the bike plan and there will be time for additional discussing of impacts on parking.

While the loop has been the focus of much of the conversation and debate, the plan is meant to address the entire city’s needs. It identifies routes that would see the current network of 153 miles of formal paths and shared bike lanes grow to 346 miles. While some shared-lanes are in the plan, it emphasizes off-street paths or separated lanes.

That separation is considered important to grow the number of people who regularly use bikes, Saint Paul Smart Trips’ Treat said. She helped form Women on Bikes to try to broaden the demographics for bicycling.

“We’re not interested in confident white males,” she said. “We’re interested in people who aren’t riding now who say they are interested but they don’t feel safe.”  Other cities across the country are far ahead of both Minneapolis and St. Paul in the number of miles of protected bike lanes, she said, and paint on the pavement doesn’t provide safety.

Another change is a call for completion of the Grand Round, a series of major trails connecting the Mississippi River and the lakes on the northern border of the city, something conceived more than a century ago by landscape architect and parks visionary H.W.S. Cleveland.

Treat said the one major significance of the plan is simply that it will exist — that key decisions as to whether a new street project will include bike facilities will have already been made.

Yet the process has also led to the creation of something St. Paul has never seen before, Treat said — active and organized advocates for alternatives to cars. “We’re trying to provide the backing for the political will to do this,” she said. “We plan on being part of that conversation.”