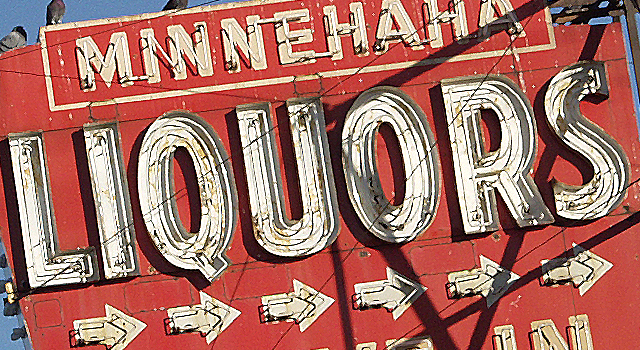 It’s a perennial argument in the seemingly perennial campaign to end Minnesota’s ban on allowing liquor stores to sell booze on Sundays: that being open an extra day would not increase sales — it would just spread those sales out over seven days instead of six.

And if sales don’t rise, then liquor stores owners would be hurt from having to absorb the increase in staffing costs.

Or as the Minnesota Municipal Beverage Association puts it: “We recognize Sunday Sales would benefit some of our members. However, the majority of facilities would eventually be negatively impacted.” The issue is “about spreading six days of sales over seven days of expenses.”

The one problem with the argument: there’s little to no evidence that it’s true.

Perhaps the best test came a decade ago in Washington state. In need of additional revenue — a common motivator for ending Blue Laws — state legislators there looked to alcohol sales. But unsure if ending the state’s ban on Sunday sales would cost more than it produced, lawmakers in 2005 settled on a pilot project. Of the 161 state liquor stores, 20 would be opened on Sunday for five hours only. Private stores under contract to offer hard liquor in smaller towns and rural areas could also opt in.

The results: sales increased at the pilot stores, and state liquor revenues increased overall. In addition, sales figures for the pilot stores showed that not only were sales on Saturdays and Mondays not reduced when the store was open on Sunday, they actually increased. At the same time, the state Liquor Control Board found that sales at state liquor stores that were not part of the Sunday pilot program suffered no overall loss of business.

A study of the sales figures would eventually conclude that being open on Sunday increased sales far in excess of the additional staffing costs. At the outset of the program, the Washington Liquor Control Board staff estimated that it would see increased sales worth $9.55 million in the first two years of Sunday sales, while increased staffing and store costs were estimated at $1.43 million. The actual increase in sales among those in the program over the first two years: $18.5 million.

At the time, Washington was one of few states that controlled both the wholesaling of distilled spirits and the retailing. Other than the small contract stores, hard liquor was sold only in state-owned stores by state employees. Beer and wine, however, was sold in grocery stores and specialty shops and was available to customers seven days a week.

No statistics were gathered to measure whether Sunday beer and wine sales declined at stores near pilot program outlets. (One of the criteria for being chosen for the experiment was that the liquor store had to be near shopping centers in densely populated areas that had other stores open on Sunday.) But Jan Gee, president of the Washington Food Industry Association, said there were no complaints from store owners about loss of beer and wine sales to nearby liquor stores open on Sunday.

The impact of Sunday liquor sales was so clear that the Legislature expanded the program to a total of 49 stores in 2007, and to 58 in 2009. 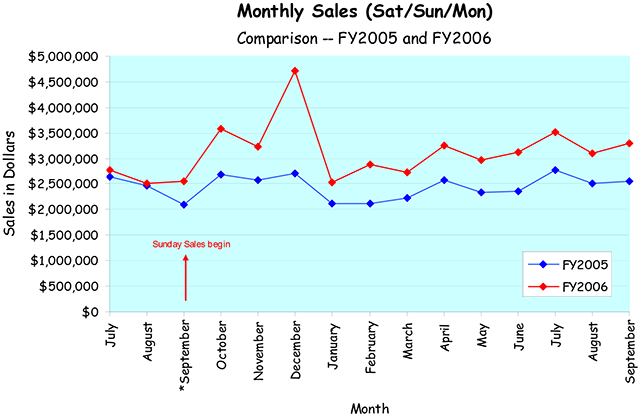 Chart source: Washington State Liquor Control Board
Data was collected on the twenty stores to determine if Sunday openings adversely affected sales on Saturday and/or Monday. Comparisons between the first year of sales for the Sunday Sales Pilot Project and the prior year were done for Saturday, Monday, and the 3-day period Saturday-Sunday-Monday. Through the first 12 months of the project sales on Saturday increased 11.4 percent; Monday sales increased 2.2 percent; and when you include Sunday, the 3-day period increased 31.3 percent. This compares to 23.8% for non-Sunday stores during the 3-day period (an increase of 7.5%).

In 2011, a voter initiative in Washington — backed heavily by retail giant Costco — kicked the state out of retail liquor sales, at both the wholesale and retail levels. Now those same grocery stores that could sell beer and wine seven days a week sell distilled spirits during the same hours.

The state liquor control board, however, was given another job by state voters the following year: It now regulates the growth, production and retail sale of recreational marijuana.

So far this session, nine bills have been introduced before the Minnesota Legislature allowing some off-sale of alcohol. They range from simply ending the ban on Sunday sales to giving local governments the option of allowing stores to remain open on Sunday. Two bills would permit craft breweries to fill growlers for off-premises consumption on Sunday. And one would create a five-year pilot project by allowing Anoka, St. Louis and Winona counties to opt in to Sunday alcohol sales in liquor stores.