On Friday morning, just as he was stepping up to the podium to announce the final numbers on the state’s budget surplus, Minnesota Management and Budget Commissioner Myron Frans made a note to himself: “Pause to smile.”

The cause for Frans’ good cheer soon became apparent. Since November, the forecast for the state’s budget surplus had nearly doubled, to $1.86 billion. For economists, and just about everyone else, more money for the 2016-2017 budget is a good thing, especially since Minnesotans faced a $6 billion budget deficit just four years ago.

But it was a brief respite before another reality became clear: The surplus might have just made lawmakers’ job a lot harder.

DFL Gov. Mark Dayton and Democrats in the state Senate said the surplus would allow them to put more money into education — though it would not eliminate the need for some new revenue to spend on the state’s transportation system. “A dedicated revenue stream for transportation is essential,” said Dayton, who is pitching a nearly $11 billion plan for roads, bridges and transit, including $6 billion alone for state roads.

But immediately after their remarks, Republicans in control of the House offered their harshest criticism yet of the DFL’s strategy to fund the transportation plan: raising the sales tax on gasoline at the wholesale level.

“I think that this surplus means that Democrats can stop talking about a gas tax in St. Paul,” House Speaker Kurt Daudt said. “This surplus is partly due to the fact that gas prices are low… low gas prices leaves more money in the pockets of Minnesota families, and that’s what improves Minnesota’s economy.”

What’s more, the surplus has now set up the GOP to pitch at least $900 million in tax cuts (“and probably a lot more than that,” Daudt said), though its unclear in what form those cuts could come. “We’re going to give some of this surplus back to Minnesotans,” he said.

Democrats in the Senate seemed uninterested in that idea, noting the budget deficits that followed a 1999 budget deal that reduced income tax rates and offered huge sales tax rebates to Minnesotans.

“That year, I believe I got about $250 and whatever I got I was very happy to use that on half a ticket to New York City,” DFL Senate Finance Chairman Dick Cohen said. “I had a great weekend and a lot of fun, but I made up for it over the next decade with higher property taxes, higher fees and any number of other things.”

Republicans don’t want to give the entire surplus directly back to Minnesotans. Daudt said they would increase the amount they are proposing to spend out of the surplus on road and bridge projects this year, though he didn’t say how much. They’d also like to increase reimbursements for nursing homes and other long-term care facilities. Republicans also want to spend more on education, though Daudt gave few specifics on what that meant.

Education is one of the only areas the governor, House and Senate leaders seem to agree could use more money from the surplus. Dayton is expanding a plan to offer pre-kindergarten education to all four-year-olds across the state, for an additional cost of $238 million in the next biennium. He also plans to give the University of Minnesota system the full $65 million it needs to freeze tuition for all students, and he lifted a self-imposed hold on funding for the Minnesota State Colleges and Universities (MNSCU) system, proposing $95 million to help freeze tuition on those campuses. 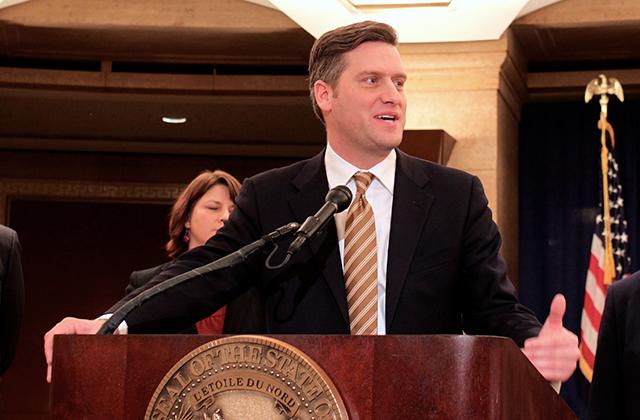 MinnPost photo by Briana Bierschbach
House Speaker Kurt Daudt: “We’re going to give some of this surplus back to Minnesotans.”

Dayton withheld money from the system in his first budget — released in January — as the faculty and staff were in the middle of a dispute over the future of the system, but he said they are on track to a resolution. Dayton also plans to restore money in his budget for the Minneapolis Park Board after they agreed to drop their opposition to the contentious Southwest Light Rail Line.

Senate Democrats said they are on board with Dayton’s plan to push more funds into education, though they were mum on whether or not they’d drop a costly proposal to give some students free tuition at technical colleges across the state.

The February budget forecast is the kickoff to the finale of the session. Legislators will now start to craft their own budgets in committee, and Dayton plans to release his supplemental budget the week of March 9. The surplus also would allow Dayton to pay off the debt service on an $850 million bonding bill he says he wants to pitch this year. That proposal could come in the later half of March.

But it’s already clear it will be a contentious process, and the 2016 campaign trail isn’t far from anyone’s mind.

House Democrats focused their comments on whether or not Republicans would live up to their campaign promises to give all of the surplus back to Minnesotans, while Daudt said — several times — that Democrats are more focused on things like pay raises for commissioners and building an office building for senators.

But Dayton, who isn’t running again in 2016, offered a simple warning.

“We have no assurance that this national economic recovery will last indefinitely. History assures us that it won’t,” he said. “Inevitably, there will be another national economic slowdown or downturn, and Minnesota’s economy will be affected like everyone else’s. Our budget surpluses will disappear.”