Minneapolis city officials were practically giddy Friday morning as they stood next to the renderings for the development of a key parcel of downtown property.

In a 13th-floor conference room overlooking the real estate in question — a dreary parking lot adjacent to the Central Library — Mayor Betsy Hodges called the choice of the Pohlad family-controlled United Properties as the site’s developer a “significant milestone.”

“Take a good, hard look out the window because it’s not going to look like this for long,” she said.

Council Member Jacob Frey, who represents the ward in which the project is located, was even more effusive about the plans: “They say great urban design is like a great party,” he said. “You linger a little bit longer, you lose track of time and you stumble home at 3 a.m. in the morning. To that extent, the Nicollet Hotel Block will be one of the best parties of the last decade.”

Calling the project “The Gateway,” United is proposing a 36-story mixed-use building that includes: 300 apartments, a “Canopy by Hilton” hotel with 182 rooms; street-level retail; Skyway-level offices; and below ground parking for 325 cars. LHB Architects is the lead architect and Stuart Development will develop the apartments. A general contractor has not been selected.

The design will meet the city’s preference for connection to the Skyway system, with the current plan to build one over 3rd Street to connect with the Cesar-Pelli designed Central Library. A second skyway would need to be built from the library over Nicollet Mall to another proposed development by Opus.

The land where the United Properties building will stand has a storied, if frustrating, history. For many years it held the Nicollet Hotel, which was eventually torn down, and the land was purchased by the city with federal transit dollars to be used as a transit center — a fancy name for a lot where cars parked and buses idled. Previous attempts to do something with the site were unsuccessful because the Federal Transit Administration insisted it retain transit uses, a deal-breaker for developers. 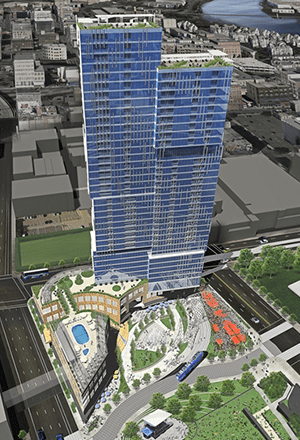 But a series of negotiations with the FTA and Metro Transit finally produced a deal a year ago. The bus transfer operation was relocated to the Gateway Ramp, and federal officials allowed the city to own — and sell — the property free of the transit-use requirement.

An ambitious request for proposals was issued last fall. Any developer would have to create a building with at least 20 stories of active space, large green spaces open to the public, a mix of uses, accommodations for a hoped-for streetcar — without any subsidies from the city.

Minneapolis-based United Properties was chosen from three finalists. Hodges said it will pay better than market prices for the land and will create an iconic building on the land just north of the main downtown library. She credited Council Members Lisa Goodman and Jacob Frey for helping shepherd to project. Goodman’s ward included the land for 16 years, but it is now in Frey’s Ward 3.

“If this site was easy to develop, it would have been done by now,” Goodman said.