An ambitious new project, known as the Gateway, will soon take shape on the historic Nicollet Hotel block now that local officials have selected a developer for the city-owned site. The Pohlad family’s United Properties won the competition to create what city leaders hope will be an iconic development at the north end of the Nicollet Mall. The Gateway will include a 36-story hotel, apartment and office complex on the site of the Nicollet House hotel that opened in 1858.

The project’s name recalls early efforts to combat urban blight that had infected the city’s first commercial district, adjacent to the downtown riverfront. By the turn of the last century, the district, centered on lower Hennepin and Washington Avenues, had become little more than a collection of shabby bars and storefronts, surrounding Minneapolis’ soon-to-be-abandoned City Hall.

In 1915, the Minneapolis Park Board pioneered the use of urban renewal when it built Gateway Park, on a triangular two-block site that included the early City Hall. The larger of the two blocks fronted on Washington Avenue. Infested with rats and other vermin, that block had contained 27 saloons before it was “urban renewed” by the Park Board.

The new downtown green space embodied the principles of the City Beautiful movement, which sought to uplift urban life through the use of beautification and monumental public architecture. Gateway Park’s focal point was a classically designed pavilion with two pergolas extending from either end of the building. An inscription at the base of the pavilion declared “THE GATEWAY: MORE THAN HER GATES, THE CITY OPENS HER HEART TO YOU.”

Not all local civic leaders had opened their hearts to the idea of a Gateway Park when the project was first proposed in 1908. In his history of Minneapolis parks system, David C. Smith notes that the proposal generated substantial controversy early on. Local financial titan Thomas Lowry championed the Gateway plan, but Charles Loring, the Park Board’s first chairman, opposed it. Loring believed the board had no business trying to beautify downtown. The man known as the “father” of the Minneapolis parks system maintained that the Gateway would become nothing more than “a loafing ground for unemployed men,” according to Smith.

In later years, Loring was proven right during the Depression, when Gateway Park did, in fact, become a “loafing ground.” Even the construction of the upscale Nicollet Hotel across from the Park in the 1920s did little to halt the tide of blight that enveloped the Gateway. 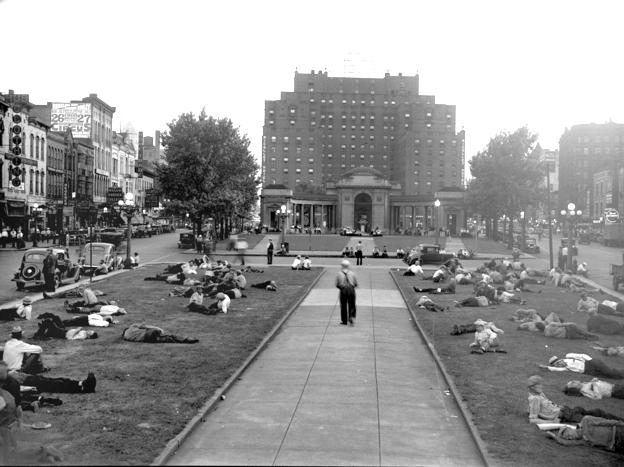 Courtesy of the Minnesota Historical Society
The prediction of Charles Loring — that Gateway Park would become a loafing ground for unemployed men — came to pass. This photograph shows the park in 1937.

By mid-century, city business leaders, including the members of the newly created Downtown Council, were increasingly fearful that the blighted Gateway district could infect the city’s retail core and hamper Minneapolis’s post-war economic resurgence.

In 1957, using the tools of federal urban renewal, city officials responded to these concerns by embarking on a new Gateway initiative, this one substantially more ambitious than the earlier 1915 effort. 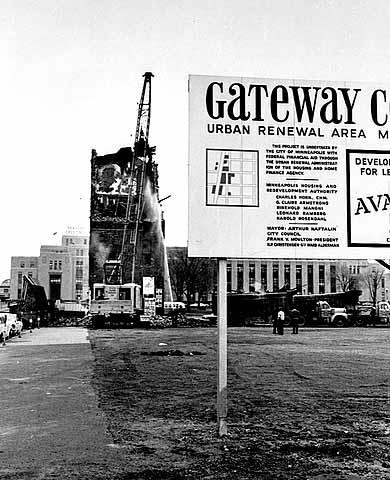 The city’s Gateway Urban Renewal Project covered a 70-acre swath of lower downtown, which included the original Gateway Park. The massive clearance project would bulldoze the blighted blocks around the park, and replace them with the Towers Apartments, the city first downtown market-rate housing development, and the column-clad Northwestern National Life Insurance Building, now known as the Ing Building.

In recent years, the Gateway Project has been soundly criticized for demolishing much of the city’s early commercial architecture, including the much-admired Metropolitan Building, and displacing the district’s low-income residents.

But Gateway renewal did lay the groundwork for a downtown resurgence that has continued up through the early years of the 21st Century. Now, 100 years after the first gateway was created in 1915, a major new development across from that early parks aims to maintain that momentum for the next 100 years.