As expected, Republicans in the Minnesota Legislature have filed a handful of bills this year to “rein in” the Metropolitan Council, the body that oversees regional transit and planning in the Twin Cities.

Less expected: that the co-sponsors for at least one of the bills are Democrats.

For Republicans, proposals to curtail some of the Met Council’s power — from removing its budgeting independence to preventing it from expanding light rail — are part of the party’s effort to fulfill campaign pledges. So it wasn’t a surprise that the new House Republican majority, many of whose members ran on claims that Democrats favored urban interests over those of Greater Minnesota, created a special committee to examine the Met Council.

“The House leadership is responding to the angst of many of our members that the Met Council is something far more aggressive than anything we’ve seen in the past,” said Rep. Linda Runbeck, R-Circle Pines, before rolling out the GOP bills.

What is a surprise is that one of the bills to reform the Met Council has bipartisan interest, if not all-out support. A bill introduced by Sen. David Osmek, R-Mound, would require the governor’s nominees to the Met Council to receive the endorsement of a majority of the city councils in their district. Those same city councils would also be empowered to remove council appointees if they fell out of favor.

Of the four cosponsors signing onto Osmek’s bill, three are DFLers. And one is not only a champion of regionalism and light rail, but the chair of the Senate Transportation and Public Safety Committee: Sen. Scott Dibble of Minneapolis.

Dibble recognized the disconnect between his politics and his name appearing on the bill. At a recent breakfast discussion with Gov. Mark Dayton’s new Met Council Chair Adam Duininck, he asked the mostly DFL room not to be alarmed.

“I’m on that bill but only as a way to keep the conversation going,” Dibble said, and that he would have his own bills on council governance. Still, Dibble agrees with the premise behind the Osmek proposal, that the members of the Met Council do not spend enough time building relationships with the people in their districts, especially elected officials.

Osmek, in announcing his bill at a GOP press conference last month, said he is frustrated that Met Council members from suburban areas have not done enough to hear concerns about housing policies and the distribution of transportation resources.

He said one of the Met Council members from his area wasn’t concerned about asking local governments for an endorsement. “The reason is, she works with her cities. She goes to meetings and she goes to mayor’s meetings,” Osmek said. “She’s very deeply involved. On the other hand, I have another Met Council representative from my area that’s a ghost.” 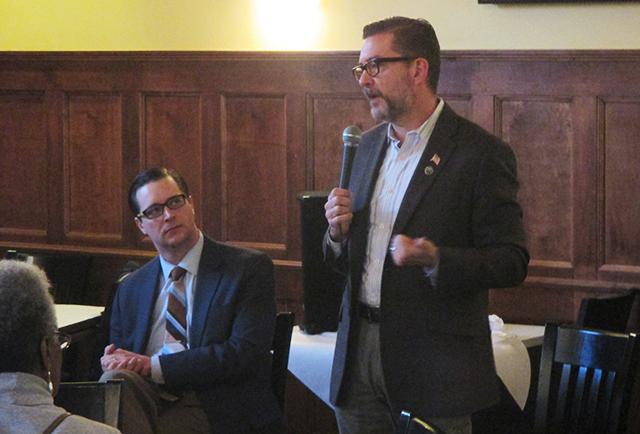 Dibble plans to file two bills Thursday that would go even further than Osmek’s. One would give local councils and mayors in each district the power to select their own council member, not just approve the governor’s pick. The other bill would subject the council members to election.

“There’s been a break in the tradition … of that on-going dialogue and relationship building,” Dibble said. Without those relationships, it is harder for the Met Council to explain decisions and understand concerns from local governments throughout the seven-county Metro area.

“To negotiate, that’s really complicated and takes a lot of work; and that relationship building hasn’t occurred really meaningfully in quite awhile,” Dibble said.

The origins of Dibble’s bill trace back to 2011, when he and Rep. Frank Hornstein, DFL-Minneapolis, asked Dayton to look for council members with “political chops” who would go to bat  for the council’s policies — but also work with local governments to explain them.

“The Met Council’s political engagement is going to have to be very smart and very robust,” the pair wrote at the time to Dayton’s nominating committee for Met Council members. “Harnessing energy from the grassroots and from the leadership of the region is our only way forward.” Dibble said he thinks the advice was generally ignored.

Minneapolis City Council Member Elizabeth Glidden, who sponsored the breakfast panel with Dibble and Duininck, said she also supports the mission of the Met Council, but thinks the interests of cities — both urban and suburban ­— need a more-formal place in decision making.

“I don’t think it has a partisan nature to it, wanting more interaction with the Met Council,” Glidden said. She said she still supports a resolution adopted by the Minneapolis Council as Dayton was taking office and considering appointees to the 16-member council. That resolution called on Dayton to consider people with demonstrated interest in regional issues such as through service on local government boards or commissions.

The same resolution supported a change in the makeup of the council itself with a majority coming from the ranks of city and county elected officials, a council of governments format used in other regions of the country. The governor would appoint a minority of council members who would stand for Senate confirmation.

Duininck has acknowledged the need to rebuild working relationships with local governments and is in the midst of a seven-week, seven-county tour to hear from residents and politicians. “When the council is under siege in the way that it is right now, it raises questions about its legitimacy and I want to bolster the legitimacy of the organization because the mission is so important,” Duininck told the breakfast audience. He said council members who do not engage with the residents and elected officials in their districts aren’t raising that legitimacy and that “sets the council back in terms of our priorities.”

But while Dayton is open to governance changes in general, Duininck said the governor is opposed to some key suggestions for the Met Council, such as altering the governor’s sole authority to pick members and to stagger their terms so that a new governor can’t immediate replace the chair and all 16 members.

Nobody likes the Met Council