And you thought it was just a business card.

Not so, say Minneapolis officials as they move forward with a Visual Identity and Graphic Standards policy — that is, new graphics to identify the city on business cards, stationery, web pages and eventually city vehicles, ID badges, and even trash cans. Also known by a little-used technical term: a “logo.”

It’s all about branding, according to the city. The “refreshed business tools” will allow the City of Lakes to “project a cohesive, professional city brand.”

And yes, “City of Lakes” will remain part of the logo, and will even be included in all of its uses, something not done currently. But the old stylized image of two sailboats (or maybe that’s one sailboat alongside its reflection) will be simplified to feature a single boat (or one boat sans reflection) with a more robust sail. Also, “City of Minneapolis” in small type size will be replaced by a larger  “Minneapolis.”

The bigger change will come to the business cards of elected officials, which now have the city seal and official motto, “En Avant” (“forward” in, yes, French). The seal, at least a version of it, would move to the back of cards for elected officials.

According to the city, the decision was made to modify the current logo rather than start from scratch. “The public has known and recognized the existing logo for decades, and given that it is associated so strongly with our organization, refreshing the logo was determined to be the best course,” reads the language outlining the proposed change, which will be taken up the city’s Executive Committee on Wednesday. (Update: The committee meeting was canceled for lack of a quorum. The logo will be taken up at the next meeting, scheduled for March. 4.)

The move would require the use of the new logo and standards in most instances by city staff. Only with special approval would a department be allowed to develop “custom looks, logos or other art for City programs/initiatives.” 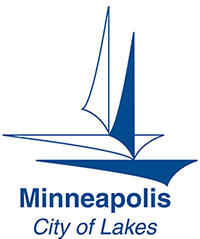 The language says that the new look is necessary to “project a professional, cohesive image,” and that a “managed look also helps the public trust that what they are receiving is truly coming from the city.”

And no, the logo refresh was not the result of a contract with some expensive private branding firm. It was developed in-house with existing city resources. If approved by the full council, the plan is to roll it out gradually, when new business cards or stationery are needed, for example, or when new trucks or trashcans are purchased.

In other words, signs and manhole covers with that old, disjointed and unprofessional extra sailboat will be around awhile.