If the designers of the proposed Downtown East Commons near the new Vikings stadium were to build a word cloud from what they heard at the first public meeting about the new park — and, naturally, they intend to — the largest word would be GREEN.

Even though the proposed downtown park [PDF] must accommodate a host of uses, including Vikings pre-game festivities and big events planned by park programmers, those who showed up Tuesday night at the Mill City Museum want the park be green and soothing, a respite from the steel and concrete — and lots and lots of glass — surrounding it.

“What we’re really doing is triggering memories,” said Council Member Jacob Frey, whose ward 3 includes the park. “In 10 years time, I want to talk to a father who says that’s the place I played Frisbee with my son. I want to talk to a workers who says that’s where I go at lunchtime to find a place for relaxation; or find someone who says, ‘You know, 10 years ago I was over on that bench making out furiously with your mother before you were born.’”

Mary Margaret Jones, the president and senior principal for lead park architect Hargreaves Associates, said designers want to hear the ideas of residents of the region as to what they are looking for in the park. Known now as the Commons, it will take over the 4.2 acres that will be surrounded by the new stadium, a new office development and the old Armory. Currently, the Star Tribune building and its employee parking lot occupy the site.

Jones said her company has done similar urban parks in other American and European cities. Several, including those in Houston and Oklahoma City, are adjacent to sports arenas and are used as event and festival space as well as more passive uses.

Peter Brown, a consultant to the city who is coordinating the project, said the Commons will come in two parts. An interim park will open in the summer of 2016  — just before the first game in the new stadium — with simple grass after Ryan finishes its projects around the park space. A fully developed park, based on the design by Hargreaves and its local partners, will open in December, 2017, a little more than a month before the stadium hosts the Super Bowl. 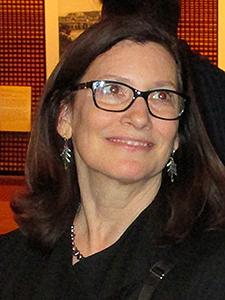 The estimated $15 million it will take to build the complete park must be raised privately, Brown said, and two more public meetings will be held to refine designs. On April 8, designers will present several concepts based on the programming needs of the park and public comments. On May 28, the design team will present a single recommendation. Finally, at a meeting sometime in July, a refined final plan will be revealed.

Jones described the challenges in a series of opposites—big and small, fast and slow, full and empty, local and global. That is, it must be able to take on big events as well as work when just a few people are there. It must feel like a local park that feels comfortable to residents but also be a destination for visitors. And the design and construction schedule must work for the interim park as well as the final iteration.

“In the design of the park, we are looking at how big events can be staged even in a pretty green park,” Jones said.

One big challenge for the design team is that the park site will be divided by two significant arterials: Portland Avenue S. and Park Avenue S. Those streets can be closed on weekends or for major events, but the current plan is to keep them open. Jones said designers will look for ways to make them feel part of the park lands through paving and landscaping. 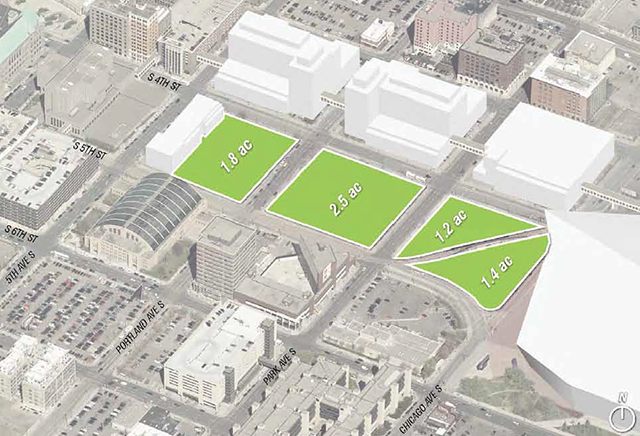 While the official park totals 4.2 acres (it’s actually a 1.8 acre square and a 2.5 acre square divided by Portland), Jones said the park area can feel larger when the space around the Downtown East light rail station and the Stadium Plaza across Chicago Street is added in. By comparison, the popular Mears Park in Lowertown St Paul is just 2 acres, Jones said.

The park will be owned by the Minneapolis Park & Recreation Board but leased to the city which, in turn, hopes to turn over operations to a non-profit conservancy. Under its legal agreement for the stadium project, the Vikings and the public  Minnesota Sports Facility Authority will control use of parts of the park for up to 100 days a year.