The recurring debate about what to do with St. Paul’s Ayd Mill Road might never have started if not for a politically driven quirk of highway engineering three decades ago.

The reasons are complex. Freeway opponents, for one, succeeded in limiting plans for I-35E in order to reduce the ill effects of a major highway running through the middle of St. Paul. It’s one reason (the others being its 45-mph speed limit and a ban on big trucks) why the section of I-35E through downtown is sometimes called “the practice freeway.”

But the accommodations to opponents also forced drivers to find their own way between the two freeways. And one of those ways is via a diagonal stretch of roach that runs from I-35E northwest to I-94 along the Canadian Pacific Railroad right-of-way: Ayd Mill Road.

Originally called Short Line Road, after the rail line, Ayd Mill Road was once envisioned as a freeway-to-freeway connection, which is why some highway advocates have long eyed it as a solution for easing the transition from I-35E to I-94. It’s also why freeway opponents, including some residents of the neighborhoods along the road, have long resisted any attempts to do just that.

“I have spent most of my career as a city planner trying to not know anything about it, for fear of getting assigned to it,” joked Nancy Homans, policy director for St. Paul Mayor Chris Coleman.

But Coleman had other ideas. Last year, he asked Homans, who until recently was doing double duty as acting public works director, to see if there was a way to resolve the seemingly irresolvable: creating a long-term solution to alleviate traffic that was also acceptable to residents who live along Ayd Mill Road.

“It’s a not very long road that generates a lot of passion,” she said.

A ‘test’ that became permanent

While some think most of the cars that use Ayd Mill are pass-through traffic — drivers from south suburbs on their way to and from Minneapolis — Homans said traffic estimates have found that about 60 percent are St. Paul locals using it as shortcut to make their own way to the freeway.

The current options for Ayd Mill are: to leave it as it is (a city road that looks like a divided four-lane highway); to finally connect it to I-94 by way of the St. Anthony frontage road north of I-94 via a new overpass; to reduce it to a two lane road with bike and pedestrian pathways; or to close it in favor of a linear park.

Each option has its fans, and each had its detractors. Which is why nothing has changed since 2002, when then Mayor Randy Kelly reopened the connection to I-35E at the south end of Ayd Mill — a temporary “test” opening that has lasted more than a decade.

So why bring it up again now? Traffic and congestion. Those reopened ramps at the south increased pass-through traffic using Ayd Mill, but because the north end connection to I-94 was never built, traffic gets dumped onto city arterials like Hamline, Snelling and Selby Avenues. From there, drivers seek their way to I-94. The pattern is reversed during evening commutes.

Already congested, the Selby and Snelling intersection has become more so due to construction of a large project by Ryan Companies. When completed in 2016, The Vintage on Selby will hold a 40,000 square foot Whole Foods as well as 210 apartments and townhouses. Adding to traffic pressures, the Snelling Avenue bridge over I-94 will close for rehabilitation this summer, during which time the city and state will take the opportunity to improve the streetscape on Snelling between Selby and Pierce Butler Route.

“There is sort of an urgency about it,” Homan said of the increasing traffic in the neighborhoods. “Everyone has their own favorite,” she said of shortcuts to and from I-94. “When we close Snelling, people will find others.” 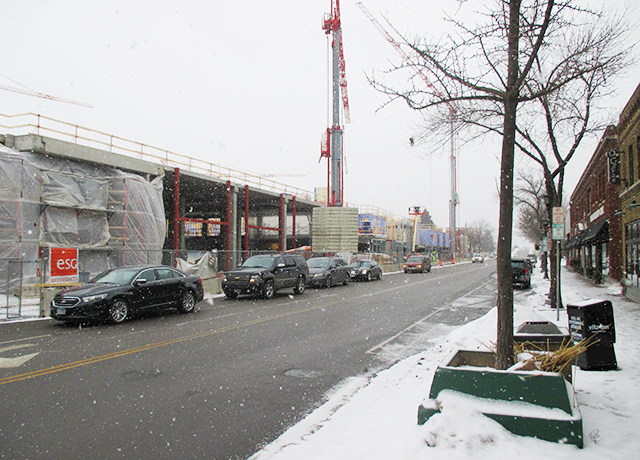 MinnPost photo by Peter Callaghan
When completed in 2016, The Vintage on Selby will hold a 40,000 square foot Whole Foods as well as 210 apartments and townhouses.

So, have sentiments changed? Have those opposed to the new overpass softened out of sympathy for the neighborhoods affected by traffic? Sort of. Homans said she found some who want the Ayd Mill issue resolved. Still, when she told the community newspaper The Villager of her assignment from Coleman and indicated the I-94 connection was likely, there was swift reaction.

“I sent her an email right away,” said Mike Madden, of the community organization Neighborhoods First. He said she replied that no decision had been made but that she felt people were ready for the I-94 connection.

Madden isn’t. Sure, there is traffic congestion on the approaches to Ayd Mill, he said. But connecting it to I-94 will not solve the problem, according to Madden; it will only increase it. “My thought is, no matter how much capacity you have, it’ll fill up,” he said.

The reaction to slow traffic is to “switch modes,” Madden said. That is, use transit or other means of getting around.

Madden still thinks the I-35E ramps were reopened illegally by Kelly in 2002, being done before an environmental impact statement was completed. That act caused the congestion in the north section, and he belives closing the ramps again could resolve it. Neighborhoods First has even described a page worth of alternatives for making the transition between the two freeways, all centered around Kellogg Boulevard, Marion Street and downtown.

The current position of the St. Paul City Council, as stated in 2000 and 2009 resolutions, is to reduce the capacity of Ayd Mill to a two-lane parkway and support a study of a two-lane connection to St. Anthony Avenue.

Neighborhoods First likes to quote a statement Coleman made during his 2005 campaign against Kelly, in which he endorsed that position. “The only way we are going to stop Mayor Kelly from shoving a four-lane highway and $45 million connection to I-94 down our throats is if we beat him in November,” Coleman said then. And this: “Connecting I-35E and I-94 will not solve our traffic problem.”

That was a decade ago, but the issues haven’t gone away. Homans said she would like to have some recommendation to Coleman later this year. Before making any recommendation, she said the mayor will consult with city council members whose wards abut the road. One of those is Council Member Chris Tolbert of Ward 3, who complimented Coleman for starting the discussion.

Tolbert said that before Kelly opened the connections on the south, commuters would use Lexington Avenue to rush toward the freeway. “Parents would tell their kids not to go near Lexington,” Tolbert said. “It is much safer now.”

But other arterials have taken on the burden, and Tolbert said he thinks something should be done for neighbors along those routes. And while he thinks the Ryan project is good for the city and the neighborhood, it will add to the congestion. “It’s not a good traffic situation,” he said. A solution, however, will not be easy.

Coleman takes on the ‘third rail’ of St. Paul politics