It didn’t take long to realize what the topic of the day was at Wednesday’s St. Paul City Council meeting.

In front of city hall, two spaces normally reserved for cars were instead set aside as a temporary bike corral, which quickly filled with people there to testify in support of a long-discussed city bike plan.

Approved on a 6-0 vote, the plan identifies routes that would see the current network of 153 miles of paths and shared bike lanes grow to 346 miles. While the plan includes some shared lanes, it emphasizes off-street paths and separated lanes.

St. Paul city planner Reuben Collins said the goal of the bike plan is to have every resident of the city within a quarter mile of a formal trail. But it also addresses issues such as bike storage, signalization, zoning changes and wayfinding. And it calls for the completion of the century-old vision of the Grand Round — a 27-mile scenic parkway for cars and bikes that would connect the Mississippi River, Como Lake and Lake Phalen.

But what received most of the comments from opponents Wednesday was a project city planning commission member (and MinnPost Cityscape columnist) Bill Lindeke said could make the city “the envy of the nation” — an oval bike loop in the downtown area of the city.

Patterned after a system in Indianapolis, the loop would likely be a separated path system, expected to start on Jackson Street (already budgeted for an $8 million rebuild), and bounded by either 10th Street or 11th Street to the north; Saint Peter or Wabasha Street to the west; and either Kellogg Boulevard or 4th Street to the south.

As envisioned, the loop would be within a few blocks of most of downtown and would connect sites like the Xcel Center, the Ordway Theater, the museums, the farmers market, the new Saints ballpark and Union Depot. It would also tie into the trails and routes outside of downtown, creating a safe way for bicyclists to get into and out of the city center.

But all that would come at the expense of something a group of downtown merchants said is vital to their businesses: on-street parking. Up to 150 street spaces could be lost to the plan. And while an ongoing parking study shows that downtown St. Paul has plentiful off-street parking in ramps and lots, merchants put special value in spaces in front of their stores.

“The number one complaint of our customers is parking,” said Brenda Lamb, an owner of the Candyland store on Wabasha Street.

Added Jim Crockarell, part of the merchant group Wabasha Partners: “We like bicycles. We like babies. We like apple pie. There’s nothing wrong with any of this. But when it comes to trying to hurt the economy of St. Paul, there are a lot of people … who do not favor an elevated bike path.”

(By elevated, opponents are referring to renderings that place the loop lanes in current parking lanes: raised from street level and protected by curbs and plantings. While the plan estimates the total cost of the loop would be $18 million, city planners say it would be put in place gradually as streets in the city come up for renovation or reconstruction.)

The St. Paul Chamber of Commerce supported the bike plan, saying that issues raised by merchants could be resolved in the implementation of the loop. 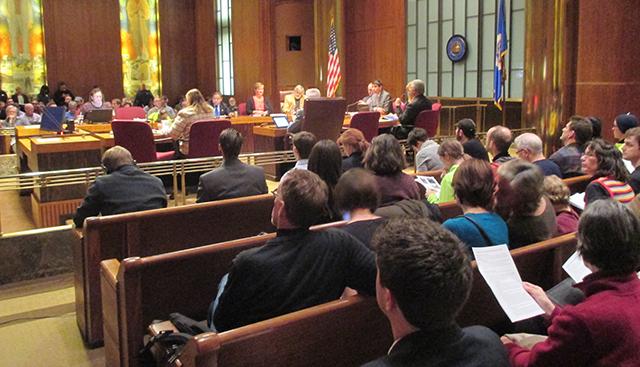 City council members were sympathetic to the concerns of the merchants and softened the impact by putting off decisions on the details of the loop until a consultant could be hired and a resident task-force could meet. That group will make recommendations on what specific streets might be used, what the lanes would look like and how parking would be impacted. Council President Russ Stark said he favors setting up the lanes downtown in a temporary fashion to test how they work and what issues they raise.

Proponents, who knew ahead of time that there were enough votes to approve the plan, touted its overall benefits. “I moved to Minneapolis from Portland because, as a friend said, I wanted to live in a real bike town,” said Michele Molstead. “Then I moved to St. Paul.” That drew a laugh from those who don’t think the capital city is equal to Minneapolis in bike friendliness. But that could begin to change with the bike plan, Molstead said. “Please vote yes and transform St. Paul into a real bike city.”

Council Member Amy Brendmoen said she thought the bike plan, including the downtown loop, would help merchants because it would bring more people into the center of the city. “Streets are public spaces and they’re here to serve people,” she said. “People in cars, people on bikes, people who walk, people who wheel. So I’m excited at the possibility of having a plan in place that will help create a more livable, vibrant city.”

In a statement released Wednesday night, St. Paul Mayor Chris Coleman applauded the vote. “This long-term, comprehensive bike plan will transform our neighborhoods over time by helping to ensure a balanced and equitable approach to transportation infrastructure, improved safety and quality of life, and new economic opportunities and access for people of all ages.”