Myron Orfield, a University of Minnesota law professor and director of the school’s Institute on Metropolitan Opportunity, might not get much argument with an assertion he makes in a soon-to-be-released study: that the Minneapolis-St. Paul region is more racially segregated than Seattle and Portland, the places he compares the Twin Cities to in the report, “Why Are the Twin Cities So Segregated?” [PDF]

It’s when Orfield ventures into his explanation of why that segregation exists that he is likely to raise eyebrows, if not outrage.

Orfield puts the blame not on overt racism or societal inertia, but on the people and organizations that — in response to poverty and poor educational outcomes — have made policy decisions that ended up actually perpetuating segregation.

“Driven by political and government apathy, the well-meaning but misdirected efforts of housing developers, school reformers and the proliferation of organizations and groups with firm financial interest in maintaining segregated living patterns, our state has slowly reversed its civil rights heritage,” the study asserts.

Specifically, Orfield and his co-authors from the institute — Will Stancil, Thomas Luce and Eric Myott — blame policies and practices that redirected affordable housing programs from mostly white suburbs back to segregated neighborhoods in Minneapolis, St. Paul and first-tier suburbs such as Brooklyn Center and Richfield.

“You can build affordable housing in poor neighborhoods,” he said during an interview this week, “you just shouldn’t build all of it [there].”

The study also repeats an argument Orfield has put forward before: that charter schools re-create school segregation by creating institutions that are too often mostly black or, increasingly, mostly white. “I don’t think the public schools in segregated neighborhoods have been doing very well for a long time,” he said in an interview this week. “I think they’re bad schools. I don’t defend them at all. But the sad thing is, the charters are worse.”

Orfield calls this the re-segregation of the region, and asserts that markers of racial segregation and inequality have worsened since the early 1980s, for which Orfield and his team blame on housing and, to a lesser extent, education.

Orfield argues that over the last several decades, the region has moved away from “fair share” policies that directed affordable housing resources to mostly white suburbs, and toward policies that pushed those resources back into the central cities. “Housing dollars returned to segregated neighborhoods,” the report states. “In the end, the very effective fair share program was ended not only by racially-motivated white opposition from affluent suburbs, but by the changing priorities and self-interest of central city politicians and housing developers, and the neglect of a disengaged Met Council and liberal legislature.” 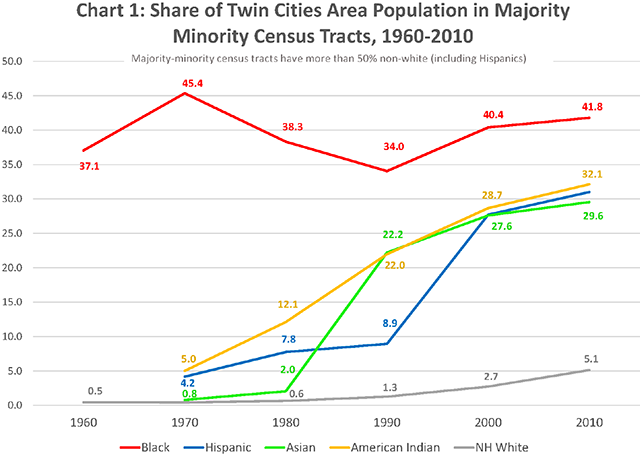 Between 2002 and 2011, the report notes, the region produced 2,249 new affordable units (affordable defined as being within reach of those earning 30 percent of the metro area’s median income). Ninety-two percent of these units were located in the central cities, the study reports. “In other words, the central cities received four times their fair share of very low-income units,” Orfield writes.

Orfield, who as a DFL state legislator helped create the current version of the Metropolitan Council, has been a vocal critic of the regional governing body, asserting that it doesn’t use its broad powers to further its goals. “The Met Council, the regional entity with the most power to ensure that housing subsidies were put towards integrative ends, instead took an easier, more politically palatable path, and directed money into urban communities where affordable development would meet no opposition.”

Orfield complains that even when white suburbs want to build affordable housing, the point system used to choose projects favor the central cities. For example, points are given to projects close to mass transit, with special emphasis on light rail and bus rapid transit. But when public and private entities pushed for affordable housing along the Green Line as a means of also increasing density there, nearly all of the units were built in low-income neighborhoods, Orfield said.

The role of the ‘poverty housing industry’

The inability to change the results, the report concludes, is due to the political clout of what Orfield calls the “Poverty Housing Industry”: “a web of tightly interconnected government agencies, non-profits, private developers, banks, and investors, all dependent upon a profitable model of building low-income housing in poor central city neighborhoods.”

Metropolitan Council Chairman Adam Duininck said the council shares the goal of using housing policy to integrate the region. “That’s the strong will of the council members,” said Duininck. “Where we have disagreement is how do we get to that result.”

Duininck also said that he’s reluctant to use force to get housing policies implemented. “Myron and others would say, ‘You should take a bit stronger or harsher approach.’ My preference is to work with incentives.”

The council recently amended a proposed affordable housing building in Cedar-Riverside to allow the developer to include some market-rate housing to provide a better mix. As to the claim that Met Council policy gives too much credit to projects near light rail, “I understand his point,” Duininck said. “If taken to extremes, we would concentrate affordable housing in struggling neighborhoods on light rail.”

And though he conceded that the council could do a better job of distributing affordable housing across the entire region, Duininck also said that some of the Met Council’s decisions were in response to housing policies in the cities of Minneapolis and St. Paul.

The report also takes aim at education policy, with special focus on charter schools. “Enhancing school integration efforts was one of the arguments initially made in support of open enrollment and charter schools, the two main school choice measures in Minnesota,” the report states. “Ironically, however, both programs eventually evolved to share many of the same strategies and results that southern segregationists had used to elude the mandates of Brown v. Board of Education, and charter proponents have completely abandoned any effort to defend the programs on the basis of integrative outcomes.”

Advocates of open enrollment also made similar claims, the report states, “but in recent years, growing numbers of white students are using the program to move from racially integrated schools (or schools in racial transition) to much less racially diverse schools.”

The reaction from charter school advocates to Orfield’s latest salvo was part “there he goes again,” part anger — and part agreement. “Year after year he makes the same points,” said Joe Nathan, director of the Center for School Change. “It would be nice if he got into the schools and helped improve outcomes for kids.”

Bill Wilson, the founder and executive director of the Higher Ground Academy in St. Paul, says there is a critical difference between what Orfield reports on and the racial segregation he experienced as a child in Indiana. The latter was government-ordered: As a kid, Wilson’s bus passed three white schools on its way to the segregated black school. So he objects to comparing charter schools to that system. “Charter schools are schools of choice,” Wilson said. “Parents choose charter schools to get a better education. The government is not imposing anything. It’s part of an open process. … Are these children better off? I think they are.” 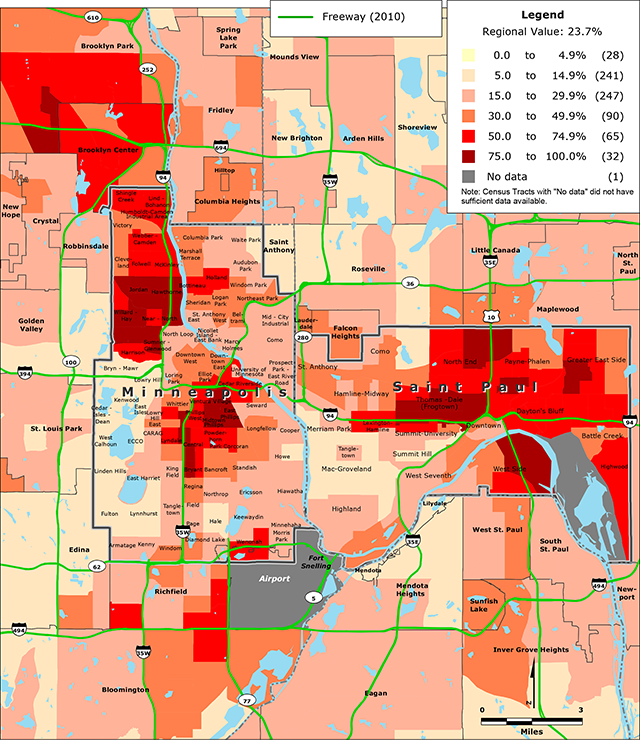 Section 8 vouchers as a remedy

Orfield’s bottom-line belief is that integrated neighborhoods are the starting point to resolving most of the problems facing low-income minority residents. If neighborhoods and cities were more racially mixed, then schools would follow, he argues. His short-term means to that end is broader use of Section 8 housing vouchers — a program that can be used by eligible residents to rent housing anywhere. Given the choice, Orfield said, many low-income minority residents will do what most people do: seek housing that is safe and near good schools.

“In many areas, existing rental units could fill the void simply by increasing the number of landlords who accept vouchers,” the report states. “If subsidized housing was currently distributed more equitably, it would be unnecessary to even discuss perennially controversial topics like pro-integrative school boundary reforms or busing.”

Subsidized housing units in the suburbs have the region’s longest waiting lists. “Nonetheless, the [public housing industry] argues that low-income racial minorities want to stay in segregated central city neighborhoods with the Twin Cities’ worst schools, and that subsidized housing must be built in these communities to accommodate them,” Orfield writes.

As the report notes, however, Section 8 vouchers are not only in short supply in Minnesota, the ability to use them is severely constricted, since there is no law prohibiting landlords from rejecting prospective tenants who seek to use vouchers to pay rent.

Why are the Twin Cities so segregated? A new report blames housing policies — and education reforms