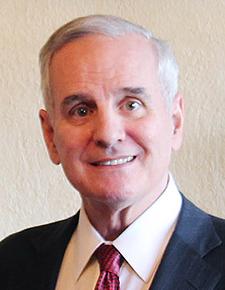 After a blitz of back-to-back on-air interviews the morning after his annual State of the State address, Gov. Mark Dayton chose to unwind a bit for one of his final meetings of the day. He switched out of his suit and tie and into a polo shirt and a jacket, cracked open a can of diet Coke and sank into a deep leather chair in the library of the governor’s residence in St. Paul.

It was an appropriate change of pace, perhaps, to discuss “Dayton unbound,” a term he coined himself shortly after winning re-election last November. At 68 years old, it was meant to describe Dayton’s approach to his second term as governor — and his final stint in any public office, he says.

But it’s also come to mean something very specific as the 2015 legislative session enters its final month. In fact, it might be better described as Dayton “all in.” Earlier this year, when Dayton laid out his priorities, they included several ambitious initiatives: a 10-year transportation funding proposal funded by a gas tax increase; 50-foot buffer zones required along all waterways on farmland; a robust package of construction projects; universal pre-kindergarten education; and investments in higher education.

What he didn’t say, at least at the time, was that those priorities aren’t only for the upcoming two-year budget he and lawmakers are crafting — they’re for his next four years as governor.

“I’ve put on the table pretty much everything that I’m aware of so far, and we will see where we come out of this session and we will see where we go from there,” Dayton said. “If there’s no bonding bill this session, my bonding bill proposal is already set for next year…same thing with transportation, if nothing happens, we will come back next year.”

Dayton “unbound” shows in more than just his agenda — it’s in his style. He makes more public appearances than he used to, and he frequently spends long stints in front of reporters answering questions. During his interview with MinnPost, he candidly talked about how he stumbled over a few parts of his State of the State address, and joked about how he wanted to “mail this one in.” (“If one of the Minnesota [college] hockey teams would have gotten into the Frozen Four, I would have had the perfect excuse,” he said.)

“I feel unbound,” Dayton added, citing the example of his push for 50-foot buffers that he says will protect the state’s waterways from the pollution created by agricultural runoff. He’s taken heat from Republicans and agriculture groups, who say the proposal is too costly and applies a one-size-fits all approach to farms across the state. Regardless, the Democratic governor has been traveling the state to take sometimes-heated questions from the community about the plan.

“People were astonished that a governor of a farming and agriculture state was willing to confront the agriculture industry and the sector,” he said. “I think a vast majority of farmers are already practicing wise stewardship, but the official organizations — the Farm Bureau, the Farmers Union, the AgriGrowth Council, the corn growers, the soybean growers — are all officially organizationally lined up in fierce opposition of this. I don’t think I could have risked that a year ago when I was going to be up for re-election. Well, I don’t have to worry about another election, I have to worry about whether the water in Minnesota is going to be clean when I leave office.”

The buffer proposal is one thing on the list he’d like to see passed sooner rather than later, along with his proposal to pump more than half of the nearly $2 billion budget surplus into early and higher education. But he’s running into pushback on both.

Neither the Republicans who control the House nor the Democrats who control of the Senate share his priorities when it comes to his signature education proposal — to fund pre-kindergarten education for four year olds across the state, and even education advocates are divided how to help close the state’s achievement gap, one of the worst in the nation.

“Early childhood advocates are split over whether the money should go to pre-K in the schools or more money for targeted scholarships for quality childcare,” Dayton said. “I say it’s not either/or. It’s both. But I’m certainly going to emphasize that, higher education too. The whole spectrum of education is absolutely essential.”

His transportation bill has been an even tougher sell, and the governor sounded pessimistic about its chances this session. While he and Republicans have come closer to agreeing on the need — both have put forward plans that fund roads and bridges to the tune of $8 billion and $7 billion, respectively, over the next decade — his push for using a wholesale tax on gasoline to pay for it and added money for mass transit is gaining little traction in the Legislature.

“On one hand, everybody knows we have to spend more on transportation, and most everybody doesn’t want to pay for it, so how do you close that gap?” Dayton asked. “It may be that it’s not going to be viable this year, and it’s only going to be harder next year in an election year.”

But he has one thing working in his favor: His relationships are solid with the two leaders of the House and Senate, Speaker Kurt Daudt and Majority Leader Tom Bakk.

Dayton said he’s mended fences with Bakk, who he accused of stabbing him in the back in a surprisingly frank press conference earlier in session. Bakk and Senate Democrats had voted to delay pay raises Dayton enacted for more than two dozen of his commissioners, and at the time the governor said he was shocked by the move.

“We had that one altercation, but he’s a Ranger, and one thing of many things I like about Iron Rangers is you know where they stand,” Dayton said. “He knows where I stand. We’ve both been involved in politics for a long time, and you can trade blows one day and put your arms around each other the next day.”

As for Daudt, Dayton said he’s impressed with his style of leadership, even given the limited years he’s spent in state politics (Daudt was first elected in the fall of 2010). “He seems sincere and reasonable. I could probably ruin his reputation with his caucus by saying that, but he is,” Dayton said. “I think there’s just good quality leadership, but the question is: How are their caucuses going to respond to the kind of compromise that will be necessary?”

Still, Dayton doesn’t seem particularly concerned that he will run into another government shutdown like in 2011, when he and a newly GOP-controlled Legislature came to an impasse over solving a nearly $6 billion budget deficit. “We have a surplus now, and it’s a lot easier to compromise on how to spend a surplus, including tax cuts, then it was back then trying to solve a deficit,” Dayton said. “I’m cautiously optimistic that we will avoid a shutdown, whether we will get done on time remains to be seen. The end games are always dicey.”

Guardian for his policies

Looking further ahead into the next three and a half years, Dayton sees his role more as a guardian of policies he’s already enacted than a creator of new ones. He’s worried about Republican proposals to cut $2 billion in taxes as well as $1 billion from the state’s health and human services budget, and he wants to see more money put into education, like he and DFL legislators did when they funded all-day kindergarten education in 2013.

“When people say, ‘Let’s skip the investments and just pocket the change,’ they are going to lead us back to the problems we had in the previous decade,” Dayton said. “Finally, now we have a sound budget situation and a really sound economy…and so now you want to toss all that in the garbage and go back to what wasn’t working before? Sometimes I feel like I’m going to continue to be fighting that fight and keeping us on the track we are on. I expect that I will have to be the guardian for what I believe is the best for Minnesota.”

There are things Dayton expects to come up that he cannot predict or completely plan for. One issue he knows will come to a head while he’s governor is the clash between environmentalists and mining interests on the Iron Range.

By the end of the year, a final environmental impact statement will be complete on the controversial copper-nickel mining project PolyMet, in Hoyt Lakes. Pro-mining interests want to see the project go forward to create jobs, a pressure that has increased in recent weeks as taconite mining operations in Northeastern Minnesota have shed employees. But environmentalists say the mining operation, the first of its kind in the region, could spoil the area’s pristine lakes for hundreds of years to come.

Immediately after session, Dayton plans to ask advocates of PolyMet to give him examples of similar proposals that have worked, and he’ll ask opponents to give him examples of projects that have failed. Then he’ll travel to each of those projects to formulate his final opinion. No matter what happens, Dayton knows it’s going to be an “extremely explosive issue” that will consume his final years in the the executive office. “It’s going to be one of the most — perhaps the most — contentious issue in my two terms. I’ve seen the kind of extreme passions it arouses on both sides, with the Boundary Waters and other issues of resource use. Ninety-five percent of the people who are engaged in that issue now, their minds are already made up,” he said. “I want jobs for Northeastern Minnesota and I want strong environmental protection for Northeastern Minnesota, and I’ve always believed the two are complementary objectives and they can be mutually obtainable objectives if we put our minds to it.”

And as for his legacy? Dayton had spent that morning answering questions about what he wants Minnesotans to remember him by when he retires in 2018, so he was ready to tick off a handful of items: all-day kindergarten, economic development, investments in higher education, preparing the state’s next workforce and, yes, the Vikings stadium.

“I think the stadium will be seen ultimately for what it’s being seen as already, as an incredible catalyst for economic growth in a dilapidated region of east Minneapolis,” he said. “That is going to generate more vitality for the city and more tax revenue for the city and the state. That will ultimately be seen as a really important step forward.”

And he hopes he can add a few more things — like transportation revenues and pre-K — by the end of his term. To try and pass those agenda items over the next few years, Dayton said he thinks he’s in a “unique position” given he’s not running for re-election, but he’s not going to be “reckless or squander my political capital” in the process, he said.

“I don’t want to go through my last three and a half years being despised for it by the people of Minnesota,” he said. “That would be a miserable way to paddle up stream, but I can take risks that I couldn’t have otherwise, and I hope those risks will turn out well.”