If political insiders ever want to know why so much of the public cares so little for the machinations of our current system, you could do worse than point to the tortured path of the “restore the vote” bill currently before the Minnesota Legislature.

On one side of the issue, you have Rep. Tony Cornish, a lawman and gun rights advocate who represents Vernon Center in the Minnesota House and co-author of the bill, which would restore voting rights to felons who have completed their time behind bars but are still on probationary status.

On the other side of the issue? Also Rep. Tony Cornish — the one who’s the chairman of the House Public Safety Committee and who refuses to let his committee hear the bill he helped write.

“I always carry controversial bills … but I don’t ever want to jam them down the throats of people I serve with,” he said, by which he means fellow Republicans. “I hate to put people on the spot.”

Cornish says the “restore the vote” bill, which seemed to have so much steam in the opening days of the session, isn’t going anywhere this session. Not surprisingly, the two-faced handling of a bill that seems to have considerable support among both Democrats and Republicans is leaving supporters of the measure surprised, mystified and disgusted.

“You think you’re doing everything right,” said Mark Haase, the co-chairman of the Restore the Vote coalition. “You get all these different groups on board. You get support from both parties and then you hear, ‘We’re going to do it.’ What the hell?”

That’s sort of how Rep. Ray Dehn, DFL-Minneapolis, feels. He was co-author, with Cornish, of the bill. That these two, the conservative rural Republican and the urban DFL progressive, were pushing for the same thing seemed like one of those rare times of true bipartisanship.

“I believe this is one of those issues that if members felt free to just vote their conscience it would easily pass,” Dehn said. “But sometimes, it’s hard to figure out what’s going on around here.”

The Senate, with some GOP support, passed the measure as part of an omnibus public safety bill a few days ago. That raised hopes among supporters that Minnesota would join 20 other states in opening voting booths to those who have served their time. Supporters rallied at the capitol Wednesday, trying to twist GOP arms. 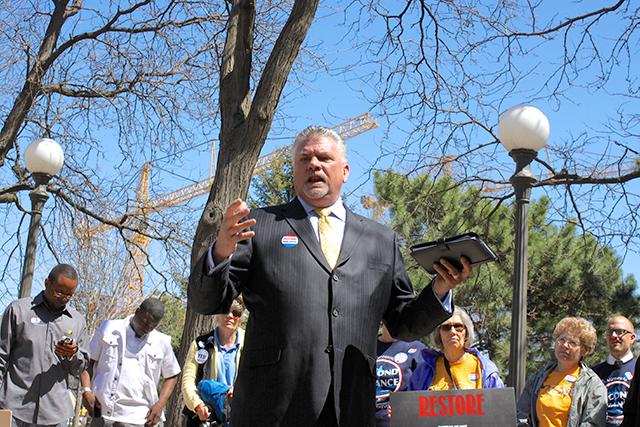 MinnPost photo by Briana Bierschbach
George Gibson, a convicted federal felon, spoke in favor of voting rights for other released felons at Wednesday’s rally at the state Capitol.

But the House hasn’t budged on the bill, and House Speaker Kurt Daudt has been silent on what’s going on behind the scenes.

Cornish is among the first to say that getting felons who have served their time into the mainstream is good public policy. “Statistics show that the more you bring those people (felons who have served their time) into the community, the less likely it is they will re-offend,” Cornish said. “But there are still people who think that probation is part of the punishment. I don’t see it that way. I say if somebody is safe enough to be brought into the community, let’s make sure that person is not isolated, that he’s made to feel welcome.”

This is not some marginal issue. There are 47,000 people in the state who have served sentences but remain on probation or parole. Public perceptions to the contrary, two-thirds of those people live outside Hennepin and Ramsey Counties, scattered throughout the state. Of the total, 32,827 are white, 9,045 are African American, 2,822 are Hispanic and 2,765 are Native American.

Randy Anderson, who was wearing a t-shirt that read “Felon,” was among those at Wednesday’s rally. He said he served 54 months in federal prison for a drug conviction, was released in 2009 and had his voting rights restored in 2012.  He figures his road to redemption (at 45, he’s completing work on becoming a drug and alcohol counselor) has been easier than it is for many who leave prison.

“I’m white, and understand all the breaks that means,” Anderson said. “But still there are obstacles for any felon. Before you get out, you’re constantly told get a job and pay your taxes. But it’s frustrating when you can’t vote. You feel like it’s taxation without representation. It’s just one more thing that sets you apart.”

Anderson said he has been on an emotional roller coaster watching the process. There was excitement and optimism early in the session, then despair, then hope again when the measure passed in the Senate. Even in the wake of the Public Safety Committee’s non-action, there remains some hope. 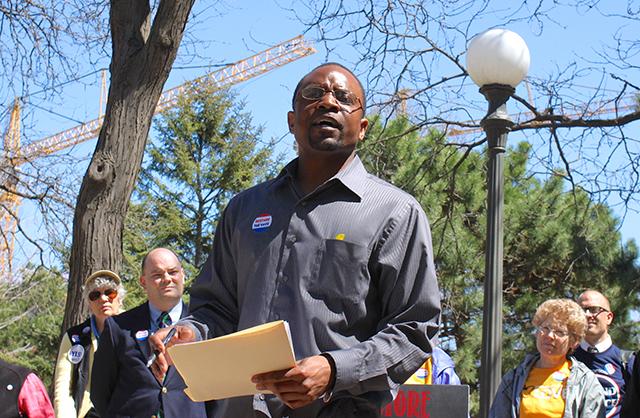 MinnPost photo by Briana Bierschbach
Terencio Safford, on probation for another five years and cannot vote, spoke at the rally about his felony DUI and the long-term rehabilitation program he completed.

The small sense of optimism centers on the possibility that the restoration portion of the Senate omnibus public safety bill will get through conference committee and on to the floor of the House. But Cornish says that’s not going to happen.

“We (the Republican caucus) are not comfortable with it yet,” Cornish said. “It’s still a year or two away.”

So again, why was he the co-author of a bill he won’t let his committee hear?

“I just wanted to get the conversation going,’‘ he said. “I wanted to move us in that direction.’‘

Dehn shakes his head when hearing this. Restoring voting rights to felons is not a new subject at the Capitol, but it never has had such a wide spectrum of support as now. But it’s been killed with legislative silence. “There are people who have completed their sentences, gone back to their communities, gotten a job, gone to college, raised a family, sent their kids to school and never have had the chance to even vote for a member of the school board,” he said. “Does that make sense?”