If you go by the map, it’s hard not to see the proposed Downtown East commons near the under-construction Viking stadium as two parks, not one.

Portland Avenue, a significant arterial on the eastern side of Minneapolis’ central core, must remain open, so it will always be a physical and visual barrier in the middle of the proposed park.

In response to that challenge, landscape architects and designers commissioned to design the new space presented four park concepts on Wednesday that either emphasized the divide or try to bridge it. In each case, the block closest to the stadium is more open with what is called the Great Lawn, making it available for use on Viking game days. The block closer to downtown has more intense uses — from a cafe to water features and play areas.

Here is how architects led by Hargreaves Associates of San Francisco described the four concepts that were unveiled to the public at a Wednesday evening forum at the Mill City Museum.The title of each reflects the degree to which the two blocks are treated as distinct halves or one unified whole. The full presentation is available here

Concept 1: Contrast: “Each block has a distinct character. The westerly block is more organic and focused on respite, while the eastern block is rectilinear and flexible.” In this concept, tree-lined promenades run along Fourth and Fifth streets, and a plaza with very shallow water plus some sprays or misters would be featured in the western block. Designers proposed that the sprays might be cool in the summer but emit a warm mist in colder months to “extend the season.” Lead designer Mary Margaret Jones, president of Hargreaves, described the western half as “whimsical, organic, flowing” and the eastern half as “rectilinear.”

Concept 2:  Contrast + Connect: “Each block has a distinct character, with key elements connecting across Portland Avenue to link the blocks.” This concept includes a wetland garden that doubles as stormwater filtering, a play area and a “dynamic plaza that seasonally transforms” from an interactive water feature with water and fog to a plaza for winter markets and events. The plaza crosses Portland to unify the two blocks visually. 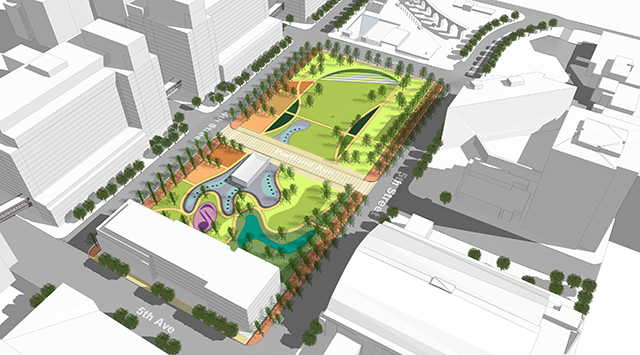 Concept 3: Connect: “Multiple elements connect across Portland Avenue, offering a gradient of open space character from the western to the eastern block.” While other concepts’ water elements evoke the city’s lakes, this concept has an actual lake that could be used for model boats and environmental education in the summer — and an ice rink in the winter, designers said. It would seemingly flow beneath Portland, emerging on the eastern block. This idea was not well received by those attending the forum. Several who spoke said the lake took up too much space in the small park and worried about maintaining it. 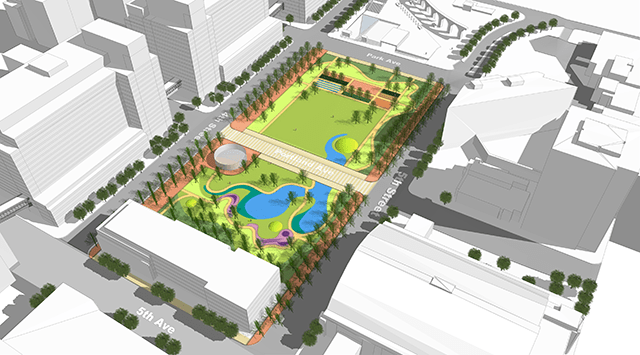 Hargreaves Associates
“Connect” is the title given for concept 3 for the proposed 4.2 acre downtown park being designed as part of the Vikings Stadium project.

Concept 4: Unite: “A single character defines both blocks.” This concept looks inward, surrounding the property with trees and landscaping, leaving the interior core as a large open lawn. Other uses are distributed around the exterior to accommodate a childrens play area, urban gardens, lunchtime seating, markets and festivals. Some complained that the design had too many trees and not enough open space. 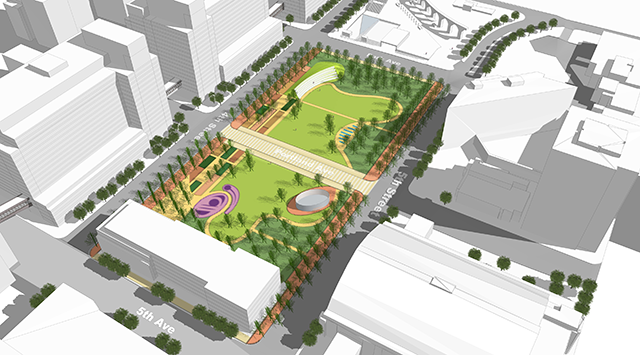 All designs include some sort of cafe that would include restrooms and space for park operators. The eatery would be in addition to a promised cafe in the residential building along Fifth Avenue South that Ryan is planning. Depending on the configuration, the open lawn could accommodate between 4,000 and 8,000 people for concerts, though Jones said she wanted it to feel intimate for 100 attendees as well. All the concepts also showed what are called program spaces or “outdoor rooms” that could hold tents for farmers markets or festivals, gardens, lawn bowling or curling areas. Jones said she wanted to create a “four-seasons” park and said the area gets lots of sun because the buildings to the south are relatively low or set back from 5th Street.

These concepts were influenced by a previous public session attended by several hundred people, as well as an online survey taken by more than 2,500 in which residents were asked what they were looking for in the park that is currently the Star Tribune building and its adjacent parking lot. That land was sold to Ryan Companies as part of a redevelopment that is flowing from the stadium project. Ryan will clear the land and put down grass before turning it over to the Park Board in the summer of 2016. In turn, the board has agreed to lease it to the city for one dollar. The city is hoping to give up operations to a non-profit conservancy.

The finished park, so far unfunded, is set to be completed by December of 2017, in time for the Super Bowl that is to be played in the new stadium early the following year. The $15 million price tag is to be covered by private fundraising, park backers say.

Jones said a single design will be presented at another public session May 27. She said designers weren’t looking for residents to vote or choose one concept, but instead say which ideas they liked. The next proposal could combine features from all four of the concepts presented Wednesday, she said.

Related to park design is a pending plan by the city of Minneapolis to reconfigure streets in the area. The plan is supposed to make the area more walkable and bikeable while still retaining arterial access through and around the neighborhood. Portland Avenue through the Commons, for example, would be reduced to two southbound lanes and a protected bike lane would be added. There would be no parking allowed next to the new park.