There seems to be a requirement somewhere in the catechism of America’s streetcar advocates: that once a day they must genuflect in the direction of Portland, Oregon.

The Northwest city is the case study for why returning streetcars to places that tore up their tracks decades ago will boost economic development and rebuild neglected urban cores. Just last week, when Dallas opened its 1.6 mile starter line — the nation’s latest — Portland figured in a quip by one of the politicians at the ribbon-cutting, which was held under overcast skies.

“Wouldn’t you know it,” said Oak Cliff City Council Member Scott Griggs, according to the Dallas Morning News. “Once you get a streetcar, you import Portland weather.”

Yes, Portland was first, unveiling its extensive streetcar system in 2001. And so far, it’s also been the most successful, thanks in no small part to how it complements a regional light rail network. The city claims that there has been $3.5 billion in development around its first streetcar line, in the city’s Pearl District.

Today, five additional cities have streetcars lines running. Three more — including Dallas — are set to open this year, while a dozen more are being planned (though Arlington, Virginia, just pulled the plug on the planning for their line), including lines in both Minneapolis and St. Paul. All hope for development to follow the rails, as it did in Portland.

But these days the catechism of streetcar salvation is being challenged by some transit agnostics — and even some who were once believers.

Some conservatives have always condemned streetcars as a waste of money, doing the same work as buses but at many times the cost. But now more urbanists have begun to question their utility, worrying that scarce transit dollars will be sucked up in a service that moves too slowly, costs too much and carries too few people.

And now comes perhaps an even more heretical act — a research report that asks if Portland might be an anomaly rather than a roadmap. What if the development outburst that followed the opening of that first section was due to a combination of factors, not just streetcars? Might that explain why a bunch of cities that spent a bunch of money expecting similar results as Portland — Tampa, Florida and Little Rock, Arkansas, for example — aren’t getting the boon they were hoping for? 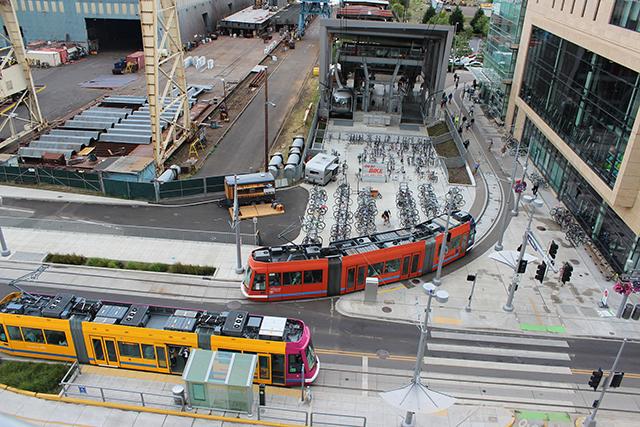 According to the authors of “The Purpose Function and Performance of Streetcar Transit in the Modern U.S. City,” streetcar planners should look at the Portland model with caution. Portland had a unique combination of factors such as existing land use that supported development, a healthy downtown real estate market, a route alignment through an area with strong population growth, employment centers and other government investments.

“The reality is much more complicated than it seems to appear in many … reports or consultant studies that have considered Portland’s experience,” concluded the report, which was put together by a team led by Jeffrey Brown of Florida State University and done for the Mineta Transportation Institute at San Jose State University.

The report comes amidst a series of news articles questioning the spread of streetcars, articles shared widely with streetcar fans and foes alike. “Streetcar Revival Is Wavering in Some Cities,” wrote the New York Times. “Are streetcars a fad, or the future?” asked Urbanful. Or as the Guardian wondered, “Streetcars of desire: why are American cities obsessed with building trams?”

In the Twin Cities, the wisdom of streetcar planning was called into question after a report on the issue was delivered to the Metropolitan Council. “Streetcars’ Benefit ‘Elusive and Debatable’ According to Study,” wrote City Pages.

The study didn’t quite say that. The quote, taken as a whole, says this: “But measuring the actual impacts of streetcar investments on the local economy versus other City policies and development incentives is elusive and debatable.” In other words, Parsons Brinckerhoff, the planning and engineering firm who compiled the report, didn’t conclude that economic benefits were elusive and debatable — because it couldn’t find enough evidence either way to reach such a conclusion.

The Mineta Institute report said much the same thing, lamenting the lack of solid research into the economics that would allow planners to isolate the effects of streetcars from other economic factors.

A critical time for streetcars in the Twin Cities

Streetcars are also coming under attack from what might otherwise be a natural constituency —  new urbanists who endorse more density and better transit. In a streets.mn article republished on MinnPost in October, Nick Magrino might have summarized the opposition in a single sentence: “The specifics will vary from city to city and project to project, but at its core the entire concept of ‘modern streetcar’ is to trick middle class people into getting on board with local route bus-quality transit service.”

Peter Wagenius, policy director for Minneapolis Mayor Betsy Hodges, said the mayor would rather not be critical of people whom she generally agrees with, but that she does believe that traditional buses are the answer in 95 percent of the transit corridors: “But in a few corridors you never will get the same level of investment with buses,” said Wagenius.

And as for those “middle-class people” Magrino referenced, Wagenius said: “There are people who only ride LRT and they don’t ride buses. These people exist. We’re not judging them. They’re just there.”

Still, the fresh research and the reconsideration come at a critical time for streetcars in the Twin Cities. Both St. Paul and Minneapolis are considering what are known as “modern” streetcars, a term used to distinguish them from vintage and replica trolleys. New streetcars can carry more passengers than bus rapid transit (BRT) vehicles and are usually more expensive than BRT, but less costly than light rail. The proposed starter lines in the two cities carry price tags between $200 million and $250 million.

The reason they are considered by some planners to have a larger development impact is because the routes and stations are fixed, giving developers confidence that they won’t be relocated later. But without a dedicated lane, they can be slow. The speeds of streetcars elsewhere are also hampered by too many stops and a lack of signal prioritization.

St. Paul’s hopes for a streetcar are on hold until a study of light rail along the Riverview Corridor is completed. Nancy Homans, policy director for Mayor Chris Coleman, said the studies have asserted that there are no “fatal flaws” in the plans and the council has approved a starter alignment on E. 7th and W. 7th between Arcade Street and Randolph Street, part of the same route being considered for a potential Riverview light rail line between Union Depot and the airport. 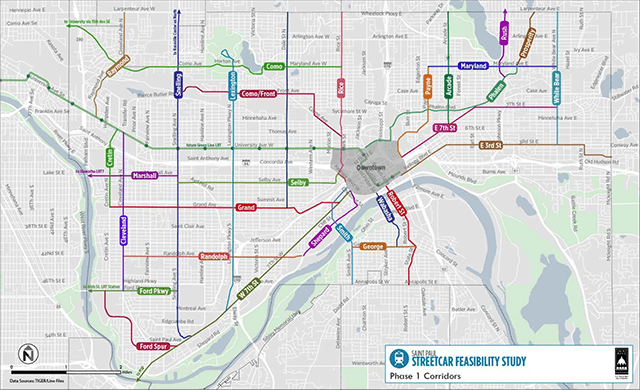 City of St. Paul
The development of the Long-Term Network began with the development of a long list potential streetcar corridors that included nearly all major arterial corridors in Saint Paul. These corridors were identified and selected through the work of the project team, the project’s advisory committees, and input from other stakeholders.

Minneapolis is further along with planning and funding. A locally approved alternative route for the Nicollet-Central line has been approved. And it even has a partial funding source from a “value capture” assessment on five properties that had already been set for development. An assessment on the increased value could support a $60 million bond issue.

But Minneapolis planners know the local funds will not be enough. The project would need to win money from the Federal Transportation Administration and be allowed a place in line for regional funding through the Met Council. Until the Met Council agrees that streetcars are part of the regional plan, it can’t even get in that line and it can’t apply for federal help.

For Homans, the questions for the Met Council are whether streetcars should be part of the regional system and therefore eligible for regional and federal money, or “does the region want to shunt them off to the side?”

The Mineta Institute study isn’t all cold water for the aspirations of streetcar boosters. It doesn’t conclude that Portland’s economic results are impossible to duplicate, just hard to isolate. Planners should look realistically at what Portland accomplished and how it succeeded, the authors stated. First among those factors was that while Portland’s system began as a development catalyst, its planners made sure it served as a transportation system as well.

In St. Paul, Homans said the city expects any streetcar to be a “workhorse” and to tie into other regional transportation corridors: light rail, bus rapid transit and regular buses. Wagenius too has been stressing the transportation aspects of the proposed line that will run from Nicollet Avenue in South Minneapolis through downtown and into Northeast.

Minneapolis Council Member Lisa Bender, a streetcar supporter, said the corridor along Nicollet to Lake is “a transit agency’s dream.” It is dense, walkable and in an area people choose because of its access to transit. It also has voters who support the types of land use rules that encourage even more density.

Minneapolis has a lot riding on its streetcar proposal. Hodges included it in her State of the City speech as an important economic development program. Bidders to build on the former Nicollet Hotel block downtown were required to accommodate not only a streetcar track, but one that could allow the tracks to transition from Nicollet to Hennepin Avenue. And last fall, in response to demands by some residents that governments increase the equity impacts of Southwest LRT, the city promised to keep pushing for streetcar and bus rapid transit lines that will connect the city’s poorer neighborhoods to existing and planned light rail routes.

“We can’t have inclusive growth without a transportation system that works for all,” Wagenius told the city council last fall.

And then there’s the issue of money. Specifically, a lack of money for everything the Met Council already would like to build and maintain even before streetcars are included in the regional Transportation Policy Plan.

Arlene McCarthy, director of Metropolitan Transportation Services for the Met Council, said staff is studying streetcars, but doesn’t expect the council to consider an amendment adding them to the plan until next year. “Sooner or later it has to get into the plan,” McCarthy said. And to be in the plan there must be funding already identified.

Both Wagenius and McCarthy say the Legislature would have to approve increased transit funding before streetcars could ever be in line for state and regional matching funds. Gov Mark Dayton has proposed increased revenue for regional transit projects, but Republicans in the Minnesota House have not, and have proposed funding changes that would reduce money for operations of the existing system.

“Streetcar is in no different position that all the other transit projects out there,” Wagenius said. “Until the Legislature chooses to pass a bill, funding for all kinds of project will sit and wait. Our goal has always been to be ready when the region decides to fund more transit.”

Why streetcars are losing their appeal as a mass transit option