For DFL Senate Majority Leader Tom Bakk, there is a path to pass a $40 billion-plus state budget on time this session — and little else.

Bakk, along with DFL Gov. Mark Dayton and Republican House Speaker Kurt Daudt, signaled the first signs of progress toward a budget deal Thursday, jotting their signatures on a final spending target for higher education, and releasing a target for public safety and the courts. The three leaders, their staffers and commissioners from Dayton’s administration have spent all week holed up in the governor’s residence in St. Paul, trying to close a deal with enough time to pass all budget bills before the constitutional requirement to adjourn Monday.

The spending targets were the first signs of progress in days, and a relief for many of the 199 other legislators back at the state Capitol, who have been waiting for word on some kind of a deal to end session on time. “Right now, it appears to me like there is a path to get all of the budget bills passed and sent to the governor by midnight on the 18th,” said Bakk, who broke a days-long “cone of silence” around leadership to talk about the details of negotiations.

But the delay in setting budget targets leaves little time left to do anything else, he said, noting that two top priorities — a long-term transportation plan and gas tax hike for Democrats, and $2 billion in tax cuts for Republicans — hadn’t been discussed in days in order to focus on the budget. Budget bills are required to be balanced by law, but tax and transportation systems will continue to operate under current law if nothing changes.

The big hurdle is one of logistics: It takes time to process the paperwork and print off bills before they can get a vote, Bakk said, and the legislative staff are going to have their hands full around-the-clock for the next few days just trying to finish the budget.

“Is there time to get a tax or transportation bill in the mix? Every hour that ticks by it gets that much harder,” Bakk said. “The revisor can mechanically only handle so much.”

He opened the door to a possible special session to deal with the two issues, noting it wouldn’t be unusual for a governor to call lawmakers back to break a tax-related gridlock, but there’s a big caveat: The Capitol restoration project. “Special session is going to be very difficult to accomplish, because with the construction schedule, it has the contractors starting to take the desks out of the [House] chamber on May 19,” Bakk said. 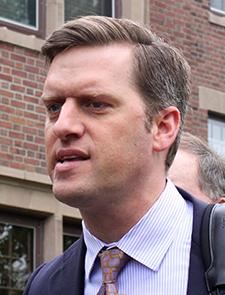 Daudt and other House Republican leaders repeatedly refused to comment on the budget negotiations throughout the day, except to say that progress was being made. Dayton didn’t make an appearance outside of a public event earlier in the day.

The higher ed and public safety budgets can now head into committee to work out final differences between the House and Senate before getting a floor vote. Senators want to keep policy provisions out of the discussions and just talk numbers, and here are the deals heading to legislative committees for final approval:

In typical Bakk fashion, the former union carpenter from the Iron Range compared the current status of a budget negotiations to fishing. “You get to a point up north where you either fish or cut bait,” he said. “But you gotta do something here.”

A budget deal begins to take shape … and not much else