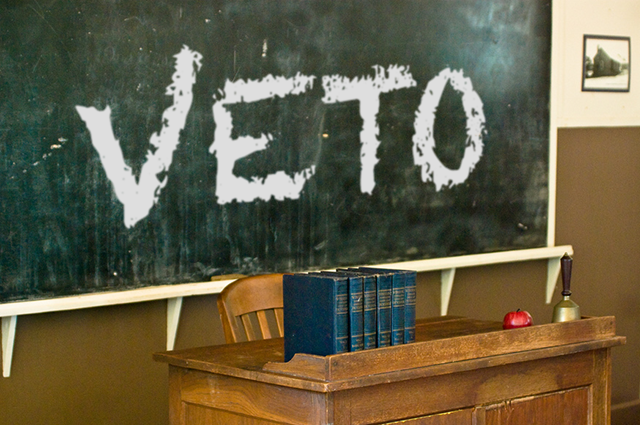 As promised many, many (many) times over, DFL Gov. Mark Dayton picked up his executive pen at 3:36 p.m. Thursday and vetoed the Legislature’s K-12 education budget, teeing up a special session sometime later this summer.

In a veto letter given to the press earlier this week, before Republicans had even delivered the education bill to the governor, Dayton laid out his complaints with the proposal, including an “insufficient” budget target and no funding for his universal, half-day preschool education proposal. All the while, Dayton said, legislative leaders left $1 billion on the bottom line to deal with tax cuts and transportation spending next session.

“As I have said before, the bill’s total investment of $400 million is insufficient given the state’s large surplus. In 2013, with a projected budget deficit of $627 million, the spending increase above the base for E-12 education was $606 million,” Dayton’s veto letter read. “It is astonishing that with a $1.9 billion surplus, and more than $1 billion left on the bottom for future tax cuts, there would be less invested in our schools this year. And it is incomprehensible that estate tax cuts for millionaires and property tax relief for large corporations are higher priorities for your House Republican Caucus than investing adequately in our students and young children.”

Initially, Dayton wanted $150 million more put into education funding over the next two years with his preschool proposal included, but in 11th hour negotiations with lawmakers Monday night, the governor said he was willing to come down to $125 million and drop his preschool plan. Republicans said they could agree to $100 million more in funding, but no solution was reached before legislators were required to adjourn at midnight.

The veto is the kickoff of special session negotiations between the governor and legislative leaders. Dayton plans to visit a school in Apple Valley on Friday to as part of a public campaign to push for his preschool plan.

“Our education budget was the picture of bipartisanship – where both sides came together to do what is right for our youngest Minnesotans,” House Republican Education Chairwoman Jenifer Loon said in a statement. “I am disappointed that Governor Dayton is forcing a special session over an education bill that garnered such strong support from both sides of the aisle and made a significant financial commitment to our students.”