A day after legislative leaders said they had reached a tentative budget deal that would allow them to end the session on time, DFL Gov. Mark Dayton says he’s not happy with the agreement — and that he’s not afraid to use his veto power to get a better one.

In particular, Dayton is miffed that the deal between Republican House Speaker Kurt Daudt and Senate Majority Leader Tom Bakk spends $400 million out of a nearly $2 billion budget surplus on early-through-high-school education. That’s $150 million less than what Dayton said he was willing to agree to; the funding also doesn’t explicitly include his top priority, universal pre-kindergarten.

Originally, Dayton wanted $750 million spent on education over the next two years, but he said he told legislators in budget negotiations all week that he was willing to come down to $550 million — if it included a 1.5 percent increase on the per-pupil spending formula each of the next two years; and if included a half-day version of his plan to offer pre-kindergarten education to 4-year-olds across the state.

“If they want to go into special session, that’s their choice,” Dayton said of legislators, who are constitutionally required to finish their business Monday. “We can get this done still if we sense some willingness to compromise on their part. I’ve offered to meet them halfway.”

Bakk said he sided with Dayton in closed-door negotiations all week, but Republicans originally wanted just $250 million more spent on education. They eventually agreed to go up to $400 million, but no higher. “The Republicans were just not willing to go there,” he said. “We are going to pass [our budget] bill, and I imagine then we are going to go home.”

Dayton has three days after session adjourns to either sign or veto any of the budget bills.

Bakk said lawmakers are open to including Dayton’s pre-kindergarten proposal in their budget bill, but it would have to fall within their $400 million target. He added that it would be “very risky” for Dayton to veto the education bill after the session ends, because education will continue to get funding through current law, but it wouldn’t get any new funding.

It could also put in jeopardy funding for the Minnesota Department of Education (MDE), which employs 400 state workers. Without staff at MDE, payments to schools could not be processed, according to officials in the office of Minnesota Management and Budget. 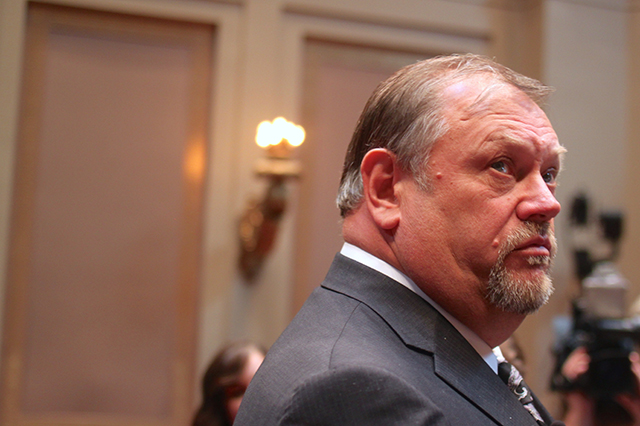 MinnPost photo by Briana Biersch
Senate Majority Leader Tom Bakk said lawmakers are open to including Dayton’s pre-kindergarten proposal in their budget bill, but it would have to fall within their $400 million target.

“He maybe doesn’t get an education bill from the House,” Bakk said. “Schools will continue to get the normal money that they get, except for the fact that they won’t get the $400 million that the governor may or may not veto. I think that’s incredibly risky. These Republicans do not want to spend money on state government, and that includes schools.”

Republicans say neither chamber passed the pre-kindergarten education bill, and many education advocates say they prefer to put money into targeted, early education scholarships and more money into the formula. Dayton said he wants to spend money on all of it.

“I’m not for either or, I’m for all,” Dayton said. “I’m for early childhood scholarships, I’m for school readiness, I’m for voluntary pre-k, and I think that will best serve the different needs. But to say we are just going to help this group and just help that group and leave everybody else out is ill advised.”

Dayton has the backing of the House DFL minority party. They signed and sent a letter to his office Saturday supporting his call for an extra $550 million spent on education.

Dayton promises to veto budget if passed without universal preschool