Toward the end of Thursday’s Saint Paul Foundation breakfast, former St. Paul Mayor Larry Cohen had a question for the four other men present who have also been elected to the office: How many of them were from New York?

George Latimer and Norm Coleman raised their hands to the laughter of those in attendance. When the others — Jim Scheibel and current Mayor Chris Coleman — responded to Cohen’s question that they, like Cohen himself, were from St. Paul, Cohen responded:  “Nary a Minneapolitan in the group,” to loud applause.

Better, it seems, to be from New York than Minneapolis if you want a political career in St. Paul. But while the breakfast featuring five of the six living mayors proved that St. Paul is not Minneapolis, it confirmed that it is very much Minnesota. When asked to name their biggest accomplishment while in office, the men mostly rebuffed the opportunity to brag; all of them, in fact, said that whatever they’d accomplished was based on the legacy crafted by those who came before them — and because of the residents of the city.

Latimer, who is credited with the push to restore Lowertown St. Paul, said it was really the dream of Norman Mears, who advocated for the revitalization and for whom the park is now named. “We stand on the shoulders of those who came before us,” he said. “I don’t think of it in terms of ‘this is what we did’ but rather ‘this is what we did together over a long period.’”

The breakfast was part of the Saint Paul Foundation’s 75th anniversary, and most of the questions posed by former MPR journalist Gary Eichten focused on the relationship between the mayors and the city’s philanthropic community. Chris Coleman said what makes St. Paul unique isn’t just the number and size of its foundations, but the fact that they frequently collaborate with each other without a care for who gets credit.

Latimer said foundations are willing to take risks that others might not. The city’s central square Rice Park is what it is today because wealthy people decided the city needed a grand orchestra hall and some others thought the St. Paul Hotel, where the breakfast was held, needed to be saved. “Rich people, at least in Minnesota, like to be anonymous — at least until they get a building named after them,” Latimer said.

But Scheibel said “you need to give more. I am concerned. When you look at the many needs we have in a changing community — and we’re part of that — we do need to be a little more bullish.” 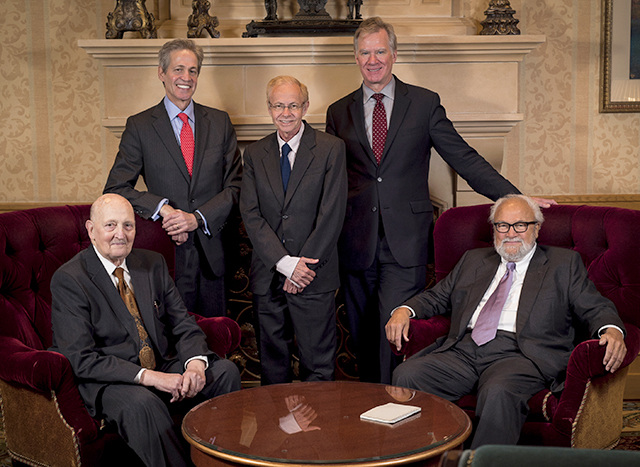 Norm Coleman, the two-term mayor who changed parties from DFL to Republican during his two terms, said the reason the city is blessed with a large philanthropic community is because people were able to make fortunes in St. Paul.

“If we have a robust private sector, if we’re generating wealth in this community, then you’re gonna have philanthropy,” the former U.S. senator said. “It’s the responsibility of government, actually, to do those things that create an environment where people want to grow jobs.”

There was much joking among the five politicians who served in what Chris Coleman called the best job any of them have ever had. Latimer made reference to the city’s proclivity to elect Irish-Americans — since the Great Depression, 13 of the 16 mayors were Irish or Catholic or both. Cohen and Norm Coleman, however, are Jewish.

“He got elected with the name Cohen,” said Latimer while pronouncing it “Cohan.” “People in the city thought he was Irish. It never could have happened otherwise.” Later, Norm Coleman said: “Unlike Mayor Cohen, I never denied my Irish heritage.”

And Scheibel found something that united the five. “If you look back at all of our state of the city speeches, we all said the city was in good shape. So we have that in common.”