If Frank Sinatra (or his ghost) had been at the unveiling of the final plan for the redevelopment of Nicollet Mall last night, he would have been humming his hit song “High Hopes.” Because for this project, city leaders have them in spades.

Jacob Frey, the Minneapolis council member who represents downtown, unabashedly declared Nicollet “the gateway to the western half of our country.” Leaving aside what St. Louis (Gateway to the West) might have to say about that, he implied that the new $50 million project, honchoed by James Corner Field Operations, the landscape architecture firm responsible for New York’s famous High Line park, could make Nicollet a “centerpiece, a highlight in our country” that tourists would — or should — flock to visit.

Steve Cramer, president and CEO of the Minneapolis Downtown Council (MDC) and Minneapolis Downtown Improvement District (DID) was no less enthusiastic; the new plan would be “transformative,” he said.  To what?  “A must-see destination,” according to his group’s 2025 plan for downtown. “A world-class destination,” according to an even more hopeful op-ed he penned last year with Mayor Betsy Hodges.

Strolling down Nicollet, which didn’t look half bad yesterday at rush hour, my prayers for the mall’s redo (its second, since it was constructed in the 1960s) were more modest. Forget about tourists from London, Paris and Tokyo. I hoped that the mall would at least lure people from Minnetonka, Apple Valley and Linden Hills — at least enough of them to boost business revenues and tax collections sufficient to repay the bonds the city and state are floating to finance their half of the project.

Taking the podium at the downtown library’s auditorium to go over the plan was James Corner himself. Only 54, he has been called the Frederick Law Olmsted of our day. (As you may remember, FLO is the fellow who designed Central Park in New York.) His claims were no less extravagant than Hodges’ or Cramer’s.  Refurbishing Nicollet would portend an “economic and cultural revitalization,” he said. I don’t know if Minneapolis needs that much help; among Midwestern cities these days, we’re pretty cultured and prosperous.

For sure the plan will beautify the street, which was wearing down around the edges. Nicollet will be much greener, and as Frey noted, there is no street that can’t be improved with more trees. The plan contemplates planting God-knows-how-many, not only in rows along the street, but also in “woodland groves” resembling those found in rural Minnesota. Fairly large batches will sit at either end of the stretch, near Loring Park and the library, and in other tree islands punctuated with grasses and perennials. Permanent and moveable seating underneath their branches will allow pedestrians to rest their feet, people watch or — what else? — play with their cell phones.

The trees (birch, mountain ash and honey locust, among others), Corner said, were selected for their ability to withstand everything Minnesota could volley their way: polar winters, summer heat, the shade of tall buildings and salt. The tree islands, which would throw a kind of dappled light on everything beneath them (think Renoir or Monet), have a practical purpose too. They would draw storm water and drain it back to the aquifers beneath. Of course, those green smudges of foliage that cleverly cover up anything unsightly in the architectural renderings will be naked branches in the winter, but so it goes. 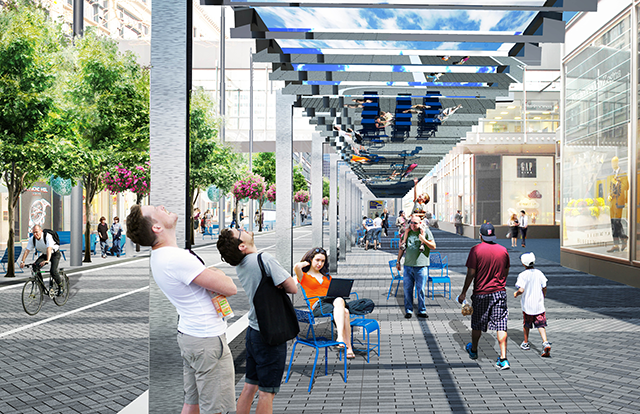 Throughout his elaboration of the plan, Corner used the word “elegant,” which to planners usually means “uniform,” as opposed to “sloppy” which is what humans are often drawn to on city streets. But the “ribbon of light” Corner plans — rows of tall poles illuminating the street evenly instead of splotching it here and there, would vastly improve Nicollet’s appearance. And they would allow attachments for traffic lights, street signs, directional signs (Orchestra Hall, thataway), and banners, cleaning up the visual clutter along the street.

Another elegance: the use of varying sizes of concrete pavers, in four tones of gray, to decorate the sidewalks and streets — all of which take up a huge portion of a pedestrian’s eye view. While the designs (herringbone for traffic lanes, for example) won’t be as flamboyant as the dizzying sidewalk designs in Rio de Janeiro, they’ll provide a more entertaining vista to pedestrians than cracks and dirt. The sidewalks will also provide “tactile warning strips,” bumps to alert walkers that they are coming to a crossing and had better heed the lights and look both ways.

Another proposal I liked: rebranding the street not as Nicollet Mile, which somebody along the way had proposed, reminding me of Miracle Mile, an unremarkable strip mall in St. Louis Park. Nor should the city keep the “mall” designation, which has its own tired connotation. Just call it “Nicollet,” Corner suggested, and don’t add any kitsch, by which I gather he meant logs featuring pink polar bear mascots or cute little turkeys. Instead, he proposed arrows with a single-sided fletching to indicate going up and down Nicollet. Those symbols could be transformed into N’s for Nicollet and MNs for Minnesota and then be etched on the new glass bus shelters, printed on shopping bags and so on.

You’ve no doubt already heard about the shinier elements of the plan. One would create two “reading rooms,” one a long curved bench in front of the YWCA on 12th Street and a kind of seating pit in front of the library that could double as a theater in the round. Both would be lit at night by jumbo version of table lamps your mom had in her living room. At the heart of the downtown between 6th and 8th, the street would straighten. Along one side there would be a reflective trellis that would bring light down to the street, Corner says. Walking in one direction would give pedestrians views of themselves, which would allow them to take selfies of themselves being selfied, I guess; in the other direction, they would see a reflection of the sky, which, in most of the lovely architectural renderings, is a bright blue rather than the dead gray visible on many winter days.

Across the street from the trellis would be an “art walk.” It wasn’t clear what this would be — something to do with lanterns created by various emerging and emerged artists who were already competing for the work. Most of the artworks already on the street, the sculpture clock and the Mary Tyler Moore statue, for example, would be reused. But exactly where on the street they would appear hasn’t been decided. Additionally, Minneapolis has allocated $500,000 to commission an “iconic, large-scale art work,” according to Mary Altman, public arts administrator. What will that look like? Stay tuned. 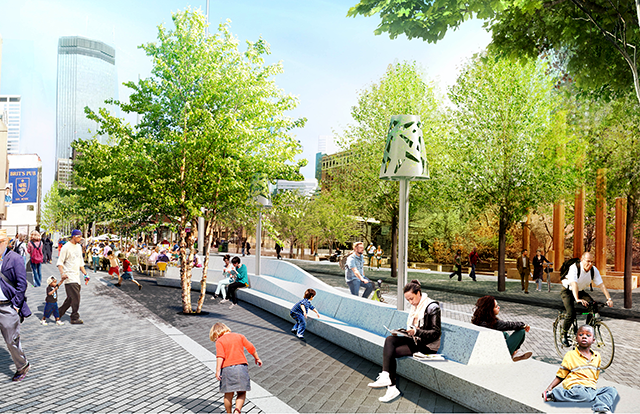 The farmers market would take place across the street from the trellis, as would programmed activities. Corner proposed curling and ice art in the winter and perhaps community dinners and a children’s fountain during the summer. I’m thinking cuckoo stuff like mimes, stilt walkers, human statues, kiosks selling those “N” shopping bags, ice cream and other tourist stuff, most of it not elegant but lively. Corner had also proposed a fire pit, which had at least been temporarily vetoed, out of fear, perhaps that it would become a drawing card for the homeless.

One aspect of the plan I’m dubious about: placing sidewalk cafes close to the curb to allow straight-line passage of pedestrians along building fronts. I picture myself colliding with a waiter carrying a plateful of spaghetti and meatballs or a tray of blue margaritas.

‘Getting people in the street’

I asked Corner what had been the most difficult challenge in redesigning Nicollet. Without hesitation, he answered “getting people in the street.” The weather, the skyways and underground parking conspire to keep workers, for example, from ever going outside. He had initially proposed two broad staircases descending from skyways around 8th Street. But merchants had vetoed the plan as impractical. Corner had probably taken the idea from the High Line, which has a huge staircase where people can lounge or watch theatrical performances. Or the Times Square staircase. But Nicollet doesn’t really have enough width to allow for staircases as well as buses, bikers and pedestrians. And, I can see the city and the downtown council hit by a slew of slip-and-fall lawsuits.  Elevators would be more compact and safer — but more expensive.

The biggest question looming over the redevelopment: why would workers descend to the streets or tourists visit it in the first place? In its early years, Nicollet Mall was a draw because of its novelty. Now pedestrian-only streets are S.O.P. for cities across the country. At streets.mn, Sam Newberg argues that a street will attract pedestrian traffic only when the buildings offer lots of windows to look in and doors that offer appealing things within. Yet, few of Nicollet’s blocks provide such temptations. Many of the buildings are corporate offices. Or they boast only one or two entrances. And, of course, if one of those entrances is to City Center or Gaviidae Commons, the visitor is going to find a lot of empty stores.

David Frank, the city’s newly appointed director of Economic Policy and Development (formerly head of Transit-Oriented Development), says that plans are afoot to bring in more businesses. Sports Authority and Sak’s Off Fifth, a discount retailer, are coming to City Center and a giant Walgreens to Gaviidae. I doubt that those are the charming little boutiques that Newberg has in mind. But it may be unrealistic to hope that in this era of big box stores a small shop could carry the rents and taxes (not to mention the special assessments) that come with a Nicollet Avenue address. Corner told me that a lot of building owners “are seeing opportunities to open up to the street.”

One development that will perhaps force their hand: downtown’s increasing population. If all those apartment projects now under construction are successful, their new tenants will demand for more — more stores, more variety, more entertainment, more food. With that trend unleashed, the new Nicollet could provide the right environment for all that to take root.

Mall no more: examining the final design of the $50 million Nicollet revamp