The last 90 seconds of the 2015 legislative session in the Minnesota House, courtesy of the UpTake.

It was five minutes before midnight Monday when Republican Speaker Kurt Daudt, standing at the rostrum in the House chamber, waved his right arm dismissively.

Time had run out to pass a bonding bill, which he had been hurriedly trying to negotiate with Democrats at the last minute, and there was barely enough time to pass a jobs package that had just cleared the state Senate. The jobs bill arrived from the upper chamber with just three minutes to spare before a constitutional deadline to adjourn. Daudt quickly brought the bill to the floor and opened it up for a vote. Democrats began to shout, arguing they hadn’t read the 90-plus page proposal, which had been drafted just hours before the vote.

Daudt ignored their calls and closed the vote. It passed with Republican support — and barely a minute to spare. He quickly moved to adjourn the House, when Democrats stood in protest shouting things like “Mr. Speaker!” “shameful!” and “crooks!” But with one pound of his gavel, the 2015 session was over.

It was a fitting final note to an uncommonly messy end of session, where most major bills were drafted in rushed, round-the-clock meetings over the weekend or just hours before hitting the House and Senate floors for votes. The broad outline of a budget deal was struck with little time to spare Friday, and many lawmakers complained the final bills contained provisions that had never been seen or heard in committees all session. Votes were cobbled together on the floor by forming strange alliances between Republicans and Democrats, and some provisions included blatant  “poison pills” — measures that invited a veto from DFL Gov. Mark Dayton.

“This is not the way to run a Legislature,” DFL Minority Leader Paul Thissen said immediately after the vote, encouraging Dayton to veto the jobs bill that had just passed.

There were many unexpected casualties of the chaotic process Monday evening: the Minnesota Pollution Control Agency’s Citizens’ Board was abolished after nearly 50 years; the state’s Political Contribution Refund program was (again) suspended; DFL State Auditor Rebecca Otto suffered a major blow in a surprise provision that would allow county officials to bypass her office and get audits from the private sector. Otto said she’s worried private firms will undercut auditors in her office and offer less transparent and independent reviews of local governments.

“It was never heard in the Senate, and legislative leaders went behind closed doors and cut a deal to put this privatization in,” said Otto, who spent her evening pacing between the House and Senate chambers, calling legislators and live-tweeting floor debates. “That really devalues the process and it diminishes transparency.” 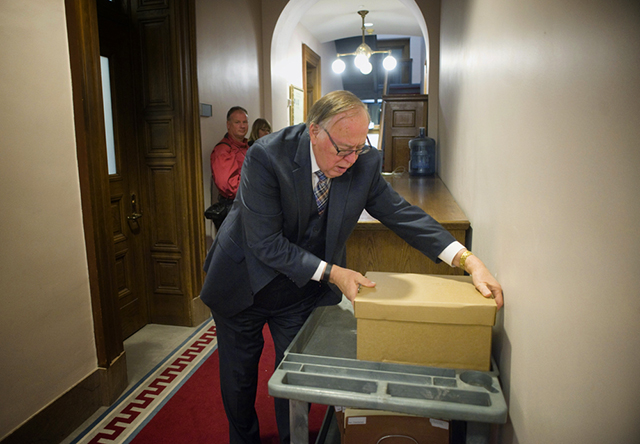 MinnPost photo by Tom Olmscheid
State Sen. David Senjem placing a box containing items from his Senate Chamber desk on a cart to be brought to his office in the State Office Building.

Other issues just fell away entirely. The first to go were a GOP proposal for tax cuts and a DFL plan to raise the gas tax for transportation improvements, which failed to gain traction all year. In the final hours of session, several other bills just ran out of time: a $107 million package of bonding projects passed out of the Senate, but it ran out of time in the House. And a bill funding projects paid for by the Legacy amendment passed out of the House, but it wasn’t given enough time to pass the Senate.

What’s more, Dayton is vowing to veto a bill with $400 million in additional education spending immediately after session because he considers it to be too small and it lacks funding for his top priority: universal pre-kindergarten education. As the Capitol undergoes restoration all summer, Dayton has suggested holding a special session in a tent on the front lawn of the Capitol. (At one point during the day, the St. Paul Hotel sent out a press release offering to hold the special session in its facilities, free of charge.)

Even on education, lawmakers were trying to come to a last-minute deal behind closed doors Monday evening that would satisfy the governor, but Daudt said he couldn’t find the votes to pass anything.

“That’s why we have a five-month session,” said Daudt. “You have to gain support and build support for these initiatives, and — unfortunately — the support wasn’t there in either body. The governor has a long ways to go to get that passed if that’s what he wants to do in special session.”

Daudt ‘proud’ of session, Bakk not so much

Immediately after the shouting match on the House floor, Daudt seemed surprisingly upbeat about the session. “We got our work done and we got it done on time,” he said. “I’m pretty proud of that.”

He’s also optimistic about the prospect to find an agreement next session on the two big outstanding issues: tax cuts and transportation. Bakk and Daudt agreed to leave $1 billion of a nearly $2 billion budget surplus untouched to try to come to an agreement next year. “We’ll come back next year, we’ll take another bite at the apple,” Daudt said. 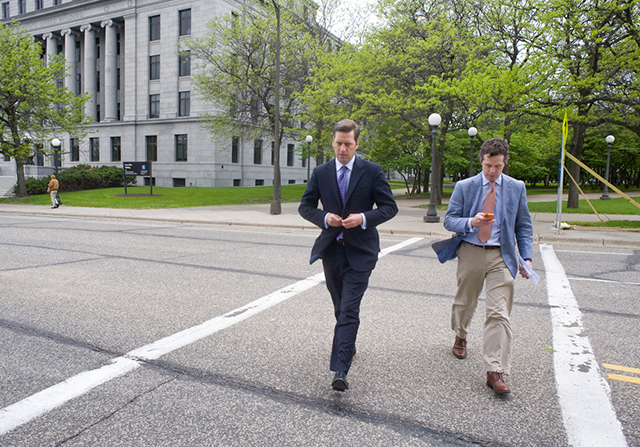 MinnPost photo by Tom Olmscheid
House Speaker Kurt Daudt, left, and his executive director Ben Golnik make their way back to the Capitol after meeting with Lt. Gov. Tina Smith at the Speaker’s office in the State Office Building hours before the end of the session.

Senate Majority Leader Tom Bakk said he was pleased that Democrats managed to block a proposal to cut $1 billion from health and human services and passed $138 million in new funding for nursing homes.

But ultimately, Bakk said he was heading back to his Iron Range district unsatisfied. “The last five months we have seen what divided government looks like. Many bills this session passed the Senate with strong bipartisan support. However, the challenge presented by divided government immobilized many promising, critical initiatives,” he said. “I … am particularly disappointed we were unable pass a comprehensive transportation bill this session. I will work tirelessly to pass a comprehensive transportation bill with stable funding during the 2016 legislative session.”

A messy end to a messy session