At a meeting Wednesday, Metropolitan Council chair Adam Duininck tried to get the members of the Corridor Management Committee — made up of local officials from communities along the Southwest Light Rail Transit route — to stick to discussing the technical aspects of a huge batch of proposed cuts to the project.

There will be time, Duininck said, to make arguments against some of the proposed cuts, which range in cost from a few thousand dollars to more than $100 million — all of which have been floated to help save a project that was put in doubt last month when the price tag ballooned by $340 million.

“I know there are going to be some reactions to what’s in front of us today,” Duininck said at the meeting. “But I want to do my best to keep this discussion at a higher level… It’ll be the next meeting where we’re really saying, ‘You know, we just can’t do this. We just can’t go this direction.’”

He wasn’t entirely successful. Peter Wagenius, representing Minneapolis Mayor Betsy Hodges on the committee of locally elected officials, couldn’t help but complain about some of the cuts suggested for Minneapolis,  measures that had made the extension of the Green Line a contentious one in the city.

One of those suggestions was to eliminate — or at least delay — construction of the first station on the new route at Royalston Street, including the pedestrian and bicycle improvements planned for the awkward and congested area near 7th Street. The other suggestions were to eliminate two other stations in Minneapolis: at Penn Avenue and 21st Street.

Taken together, the cuts would save the project as much as $34 million. But Wagenius, the policy director for Hodges, said they also would eliminate the primary justification for choosing the alignment through the Kenilworth Corridor over other proposed routes: that it would better serve low-income and minority residents in North Minneapolis.

“This was a huge part of the argument in favor of the Kenilworth alignment,” Wagenius said. It was pushed, not by the city, but by Hennepin County and Met Council officials. Minneapolis was skeptical, he said, because it feared the stations would last only long enough for the route to be approved and then be cut out later.

“So here we have a [Powerpoint] slide that on one page would eliminate two out of three stations in North Minneapolis,” Wagenius said. Enhanced bus service that was to connect North Minneapolis to the new stations is already being reduced.

Met Council staff now thinks that with planning progressing for the extension of the Blue Line (known as Bottineau) to the Northwest, many of the riders who would have gotten to Royalston and Penn stations via buses will instead take the Blue Line to Target Field and transfer to the Green Line for trips toward Eden Prairie.

Duininck did not respond specifically to Wagenius’ complaints, only to say such debates will begin in earnest at the Corridor Management Committee’s June 3 meeting. He said the project staff was told by the council and Gov. Mark Dayton to put every possible cut on the table unless they would damage the overall goals or endanger the project’s eligibility for federal matching funds. 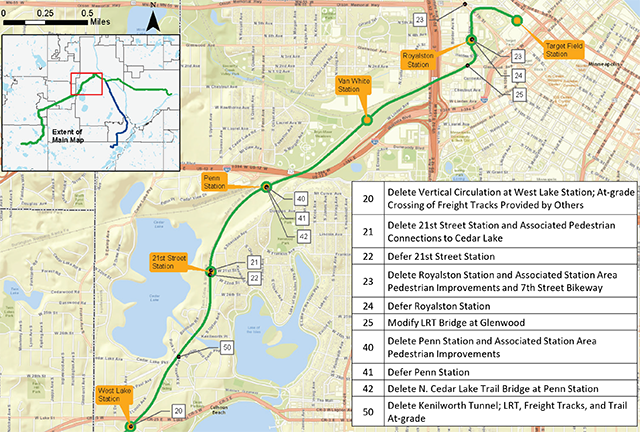 Much at stake for Eden Prairie

The other committee member with the most at stake in the cuts did not follow Wagenius’ lead. Eden Prairie Mayor Nancy Tyra-Lukens said she was willing to let staff outline the proposed cuts without a response from her until later sessions. After the meeting, however, Tyra-Lukens acknowledged the obvious, that when your city sits at the end of the line it contains some of the most-obvious and high-dollar-value reductions.

For example, eliminating the final station at Mitchell would save between $115 million and $120 million. That would make the park & ride facility there unnecessary, saving another $25 million. That single act would make up more than 40 percent of the targeted cuts that would save the project.

But Tyra-Lukens noted that if that cut was absorbed, 75 percent of the other 49 proposed cuts would have to be taken as well. Those range from cutting other stations and park & ride facilities to reducing the number of train sets and cutting landscaping, station furnishings and trail structures.

So more cuts were listed that would shorten the line even further, something Tyra-Lukens noted was “killing me.” Cutting out the second-to-last station under the current alignment — Southwest — would save the project another $85 million. Cutting the third-to-last station at Eden Prairie Town Center would save another $40 million. And making the Golden Triangle Station the terminus would save more than enough to bring the project back within its previous $1.65 billion budget

Tyra-Lukens said she thinks her city would be willing to agree to the Mitchell cut. But she said that lopping off the next two stations would be more problematic. And suggestions that a later extension plan could complete the original alignment were “iffy.”

Municipal consent is the process required by state law that lets each city plus Hennepin County veto the project through their jurisdiction. The county and all cities on the line have consented — some, like Minneapolis, reluctantly, and only after concessions and project additions would added. But the scope of the proposed cuts would likely force a new municipal consent process in all except Edina, which is not facing significant cuts in the process. 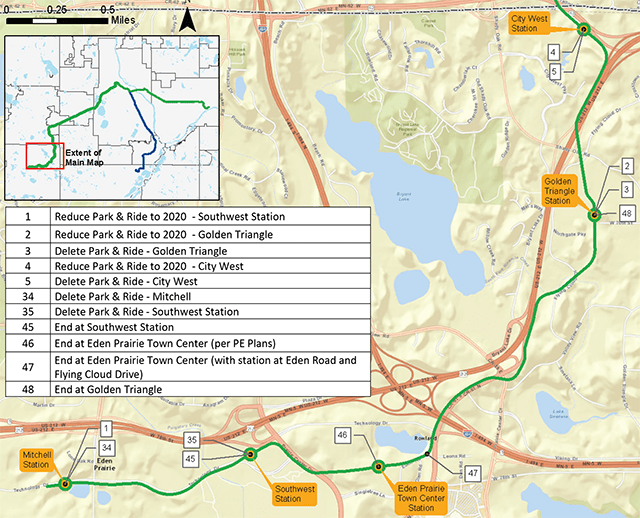 No savings in scrapping Kenilworth tunnel

One proposed cut that would prove to be surprisingly unfruitful was the elimination of the controversial tunnel south of the Kenilworth Channel. The tunnel was needed to accommodate the new light rail tracks as well as existing freight rail and the popular bike-pedestrian trail on the narrow passageway.

But killing the tunnel would require the project to buy and tear down several dozen townhomes to widen the right of way. That plus the $50 million cost of delaying the project by a year means the move wouldn’t actually save any money.

Wednesday’s meeting was called to look at cuts, but there seems to be little interest in looking into other suggestions from the governor: examining ways to serve the transit needs along the corridor with modes other than light rail transit. Met Council staff is still preparing alternatives, such as expanded bus service, including bus rapid transit. The political leadership among the cities along the route, however, has expressed preference to cut the costs and move forward with LRT.

Duininck said he expects the Met Council to take up budget reductions in the coming weeks with the final decision July 8. After Wednesday’s meeting, he said the budget reduction process is “as challenging as I thought it would be.” Not only must the dollar target be reached but it must be done in a way that “keeps the consensus.” That is, to end with a project that has the support of all of the cities and all of the funders — the federal government, the state, the Counties Transit Improvement Board and the Hennepin County Regional Rail Authority.

But he expressed confidence that the Green Line extension could be saved, declaring that “the patient is alive and breathing.”