Minnesota State Auditor Rebecca Otto suspects political motivations — by members of her own party — led to a last-minute legislative proposal to allow counties to hire private companies to do the audits her office performs.

Otto, a Democrat serving her third term as state auditor, said Republicans have pushed for years to allow county governments to seek audits from private companies instead of through the state auditor’s office, but it was an 11th hour agreement between House Republicans and Democrats who control the Senate that moved the provision through.

Otto alienated some members of her own party on the Iron Range last year when she voted against approving a handful of mining leases, and then sent out a fundraising appeal mentioning the vote. Otto took the vote as a member of the state’s Executive Council, which is comprised of statewide officers and is tasked with approving mineral leases. Senate Majority Leader Tom Bakk and DFL Sen. Tom Saxhaug, author of the state government bill that included the auditor provision, both hail from the Iron Range.

“I think it’s a combination of several different things, but Saxhaug is from up there, Bakk is from up there, and there were people who should have known this was happening and were not told,” Otto told MinnPost. “Sometimes when people get sleep deprived they make very poor decisions. It didn’t get properly heard. They’ve got a chance to do this over; they’ve got a chance to fix it. I’m hopeful.”

Saxhaug denied any political motivations in the move, and noted that last-minute deals are common when bills are being negotiated in conference committees. “I came out of private business and I also served on county boards before I came to the state Legislature, and I understand what’s going on and I’m always in support of my counties and school boards and school districts being more efficient,” he said, adding that school boards and cities can already seek private audits.

DFL Gov. Mark Dayton hasn’t said if he will veto the state government budget bill, but he promised to fix the language relating to state audits in an upcoming special session, saying he wanted to make that a pre-condition of any session overtime. Dayton previously vetoed a similar measure when Republicans controlled both chambers of the Legislature.

Originally, House Republicans and Senate Democrats had agreed to do a study of the state auditor’s office, but at the last minute, the provision was changed. The measure that was ultimately passed by the Legislature gives Minnesota counties more power to hire private firms for financial audits. Rep. Sarah Anderson, R-Plymouth, who authored the state government bill in the lower chamber, said on the House floor that county governments asked for the change because the state’s process is slow and cumbersome.

Otto said she fears private firms will undercut her office and provide less transparent and independent reviews. What’s more, Otto said the way the bill was drafted at the last minute will simply strip a mandate for counties to get audits starting July 1.  The language allowing private companies to do county audits doesn’t kick in until the following year, leaving a huge gap local government oversight, she said. “This is creating a horrendous mess.” 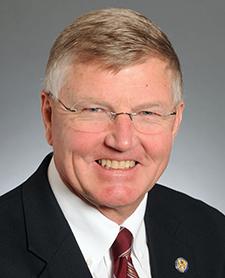 “The Senate is usually a very deliberative body,” she added. “They had a couple of people who knew about it and voted for it. I think people were confused.”

“There were games being played, clearly games were being played,” she added. “It’s clearly an injustice to the people of Minnesota. Once this function is gone from this office it’s not coming back.”

After the mining kerfuffle last year, “Dump Otto” signs popped up in yards in northeastern Minnesota. Otto also got a primary challenger in former DFL House Minority Leader Matt Entenza, who tried to rally Iron Range Democrats to his side. In the end, Otto trounced Entenza with more than 80 percent of the vote and won the general election against Republican challenger Randy Gilbert on a 53-to-38 margin. “As a state auditor I’m always going to do my job without fear or favor,” Otto said. “Sometimes that ruffles feathers.”

Saxhaug said there’s still time to change the bill if local governments don’t want the option. “This is no madate, it’s just a choice they can make,” he said.