People come and go from the Minnesota Legislature. Ambition for higher office, election losses, disappointment with the process, personal issues — all lead to change. The institution keeps stumbling along.

Some legislators, though, are missed more than others. Ryan Winkler will be one of those whose absence will be noticed.

Winkler, a DFLer from Golden Valley first elected in 2006, announced last week that he will be resigning his seat at the conclusion of a special session, brought a combination of passion and biting wit to the Minnesota House.

He’s leaving because his spouse, Jenny, has accepted a position as a senior vice president and general counsel for Rezidor Hotel Group, a Belgium-based hotel management company. The professional advancement for her, the chance for the family to be closer to her family in Sweden, and the opportunity for their two children to taste life in Europe all made this seem a logical move. Winkler will continue to spend about half his time in Minnesota as general counsel for Biothera, a Minnesota-based biotech company.

“We’re very fortunate,” the 39-year-old Winkler said of the move. “This was one of those positive decisions.”

Peggy Flanagan, executive director of Children’s Defense Fund Minnesota and a former member of the Minneapolis Board of Education, has already announced she’s running for Winkler’s seat. Others are expected to also make a bid for a seat that appears to be solidly DFL.

So Winkler’s seat will not mean much when it comes to the party alignment of the House. But his absence will be noticed.

Rep. Pat Garofalo, R-Farmington, often engaged in funny, pointed exchanges with Winkler, so much so that outsiders might have considered their debates in the House downright nasty. “Anyone who takes Ryan’s barbs personally doesn’t understand that that’s politics,” Garofalo said. “Like Michael Corleone said in The Godfather, ‘It’s not personal, it’s business.”’

On the last night of the regular session, for example, Winkler took great delight in challenging House Majority Leader Joyce Peppin about a $12 million item in the state government finance bill.

Republicans were refusing to come out and say that the $12 million was for the new Senate office building, which the GOP had claimed to be outraged about during the 2014 election campaign. Winkler congratulated Peppin for having recently graduated from law school. Then, over and over, Winkler — a lawyer himself — asked her to define “property.” Peppin refused. Winkler kept jabbing. DFLers sat back, enjoying the show.

Finally, Peppin snapped. “It’s about 10 o’clock. We have two bills to do. We can play these little games later.”

Winkler countered: “You’re free falling to the concrete and headed to a special session. We have no reason to filibuster your failures.” 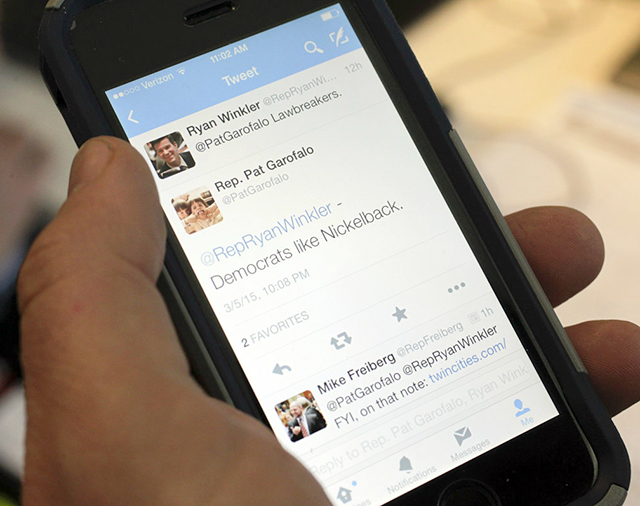 Garofalo said Ryan’s style reminded him of the agitator in hockey. “He’s the equivalent of a fist-fighting instigator who can knock you on your ass but who also has the talent to score goals,” he said. “There aren’t many players like that in hockey, and even fewer legislators like that in the House.”

In fact, Winkler said he may have learned his debating style as a hockey player for a so-so Bemidji High School team a couple of decades ago. “We weren’t all that good, so when you’re playing a team that’s stronger than you, you learn that if you’re going to have a chance you’d better go for the body.”

But Winkler said those blows aren’t personal — and most in the legislature understand that. Last week, after the clock struck midnight and the session ended, Winkler went to the retiring room, which is off limits to all but House members. There, he schmoozed and shook hands with members of the GOP caucus, including Peppin.

There are reasons — theatrical and philosophical — for his style, Winkler said. “Sometimes, especially near the end of the session, the hours are endless,” he said. “There’s this desire to stir things up little and have some fun, create some action. But, more importantly, there’s power in telling the truth and not being afraid to tell the truth. The truth is a powerful thing if you’re willing to use it.”

Of course, “truth” in the political arena is in the eye of the beholder. Winkler represents the passionate progressive spectrum of the DFL. No one pushed more relentlessly for an increase in the minimum wage than Winkler, for instance, despite the fact that it meant he often was in the face of Senate DFL leadership, which was not eager for substantial increases.

But the most important aspect of the legislation, according to Winkler, is the fact that in ensuing years, there will be annual increases tied to the cost of living — a point Winkler absolutely refused to budge on during the debate. Assuming changes aren’t made — and many business groups, GOP legislators and even some frightened DFLers are pushing for some alterations — the minimum wage will not be stagnant as it has been in the past.

“I’m somebody who believes that people who work deserve dignity, they deserve the right to support their families,” Winkler said. “I know, that seems like a radical idea, given the way society has evolved and been manipulated in the last few decades.”

When it served purposes he believed in, Winkler would even team with the other side of the aisle, even against a DFL administration. In 2013, Winkler and Garofalo joined together to write an op-ed piece for the Star Tribune, criticizing Gov. Mark Dayton’s Department of Education for stances it was taking regarding scholarships for children from low-income families. (The department wanted tight caps on scholarship amounts.)

“It was like the Hatfields and the McCoys joining forces,” said Garofalo of working with Winkler on that piece, “but he wasn’t afraid to ruffle a few feathers to advocate for the best interests of kids.”

That issue — scholarships versus Dayton’s desire to offer universal pre-K — goes on. As will the Legislature. But without Winkler, there’ll be a little less passion. And a lot less laughter.