Most of those opposing the special property tax assessments to help pay for the $50 million redo of Nicollet Mall in downtown Minneapolis have had predictable complaints: They argue that they’re either too far from the area to get any benefits from the remake, or they think the benefits don’t outweigh their share of the cost.

But a batch of nonprofit organizations — churches mostly — have raised a different objection, a “creative and novel” argument that says that assessing the nonprofits at levels equal to other institutions for the improvements could actually violate the Minnesota Constitution.

How’s that? Under Minnesota’s 1858 constitution, most nonprofits are exempt from paying regular property taxes because they are presumed to deliver services that benefit the community. But under long-established case law, they do pay special assessments for things such as new streets, sidewalks or sewers adjacent to their property.

What’s happening with Nicollet Mall, however, goes beyond sidewalk and lighting, argued Kurt Glaser, an attorney representing the Basilica of St. Mary.

“The Nicollet Mall design is touted as a “must-see destination by including significant pieces of art, outdoor restaurant seating, fire pits and other features that go beyond basic public infrastructure,” Glaser wrote in a letter to the city. “These discretionary costs cross the line between special assessments and the constitutional tax exemption for non-profit organizations.”

During testimony at the public hearing on the assessments last week, Glaser said the church and other nonprofits “think this is a great project, we want to pay our fair share, but the reason why nonprofits exist is to do work that supports what the city does.”

The basilica is in the second of three categories for property deemed to benefit from the mall project, and has been assessed $50,000 over 20 years for improvements to the pedestrian and transit mall. Glaser and others said they think the nonprofits should be assessed for some of the costs, but suggested a separate assessment level for nonprofits that would be 50 percent of the charges applied to “institutions.” At the hearing, Glaser referenced the basilica’s shoe ministry for the poor and homeless, noting that “$50,000 would buy a lot of shoes.”

Among the other objecters are the University of St. Thomas, St. Olaf Catholic Church, Westminster Presbyterian Church and the YWCA. 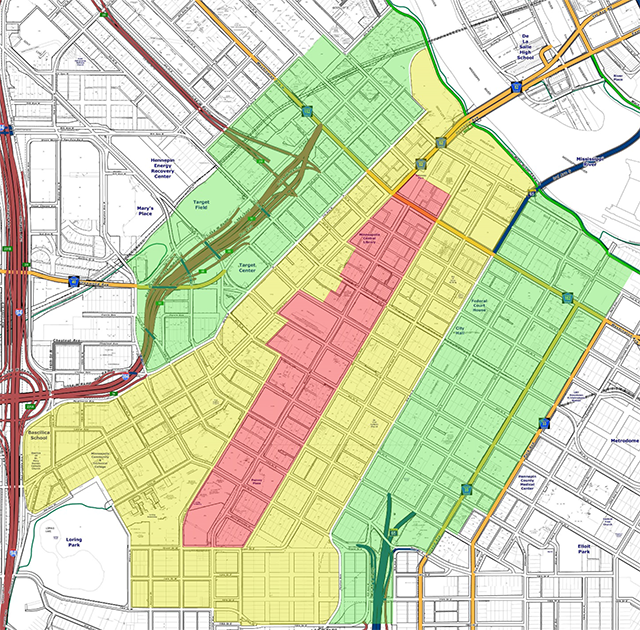 Using special assessments of nearby properties to pay for improvements is a means of value-capture. That is, the owners of the property will benefit from increased property values because of the project and some of that increase is tapped by the city to pay for the improvements. Don Elwood, director of transportation planning and engineering for the city department of public works, said the city hired a specialist to draw up the assessment system and conduct a market analysis. “Our market assessment shows there is a benefit, and the benefit exceeds the assessment,” Elwood told the committee.

But increases in value only matter if an owner might wish to sell in the future and the project helps sellers fetch a higher sales price. The churches are not expecting to sell, and as a letter of objection from Westminster treasurer Dean Bachmeier argued: “there is no benefit to the properties from the project and the assessment is therefore a taking that violates the state and federal constitutions.”

Transportation and Public Works Committee Chair Kevin Reich asked for a legal interpretation of the constitutional issue. Assistant City Attorney Robin Hennessy said she would need time to explore it because it is a legal argument that is “creative and novel,” meaning no court has been asked to rule on it.

There are eight different property groups in the assessment plan: office, hotel, retail, parking, industrial, institutional, land and residential. There are also four different zones that determine the level of assessments. Under the plan, 7,100 different parcels will be assessed to raise the private share of the project. According to a city staff presentation, an office building closest to Nicollet with a value of $10 million would pay $2,900 a year for 20 years while a condo in the zone furthest from the mall with a value of $250,000 would pay $210, or $10.50 a year.

The Nicollet Mall project is a centerpiece of the city’s efforts to bolster downtown as a regional destination.

“This isn’t just a street,” Reich said. “It’s Main Street, Minnesota.” Utility work will be done this spring and summer with major work — and disruptions — starting in the Spring of 2016. It is expected to be finished in 2017.

Designed by James Corner Field Operations of New York, the project will run from Washington Avenue South to Grant Street East. and will include new hardscapes, trees and other plantings, lighting, shelters and street furniture. The money comes from the state ($21.5 million), the city ($3.5 million) and through special property tax assessments ($25 million). In addition to the area-wide special assessment, property on Nicollet will be assessed a second fee totaling $1.6 million under the city’s standard street paving assessments.

Council Member Lisa Goodman, a supporter of the project, said the nonprofits will benefit from the mall project and already benefit from the statewide exemption from regular property taxes.

‘No one wants to pay’

“Everyone thinks it’s a great project, but no one wants to pay,” she said. “Just because they don’t care if their property increases in value doesn’t mean the property doesn’t benefit.” The churches, she said, have significant numbers of out-of-town visitors to their campuses: “One of the things that make it attractive is Nicollet Mall.”

Goodman also said suggestions that the assessments will pay for items such as sidewalk cafes, fire pits and bocce courts is incorrect. While all are shown in renderings, the sidewalk seating would be paid for by adjacent restaurants, the fire pit is no longer in the design and the bocce/curling courts would not be permanent installations. Art is included but is required by a city ordinance that sets aside 2 percent of major projects for art.

Goodman said special assessments always draw complaints from some property owners, but she sees the Nicollet Mall assessments as the fairest she has seen during her time on the city council. That is because others — state government and city government — are paying half the costs. The last time the mall was redone in 1989, property owners in the area covered 85 percent of the price tag.

By raising objections, the nonprofits reserve their right to appeal the assessments in district court. Several private property owners, including WCCO-TV and the Hotel Minneapolis, told the council they might take that step as well. Glaser said that the district court process, required by state law, is the fastest way to get the constitutional issues before a court. No decision has been made by the basilica about an appeal, he said.

Jon Pratt, the executive director of the Minnesota Council of Nonprofits, said the reason nonprofits are exempt from general taxes is because they provide a public benefit. “You want to assure donors that all of their money is going to the public benefit,” he said. “You don’t tax the fire department to pay for the police department.”

The issue raised in the Nicollet Mall assessments gets to the delineation between a tax and a fee, said Pratt. While nonprofits don’t pay general taxes that pay for general government, they do pay fees for services applied directly to their properties and activities. “Is this a tax or is it a fee?” Pratt asked. “It’s behaving more like a tax.”