The plan for the new Downtown East park — now dubbed “The Commons,” has a lot going for it — and a lot going on in it. The latest design for the 4.2-acre site presented to the public last night by San Francisco landscape architects Hargreaves Associates crams in a ton of stuff: a café, promenades, a Great Lawn, a lesser lawn, a water feature, play areas for kids, a stage, garden-y places, trees (of course), places to compete at bocce and chess, kiosks, an ice rink in winter, tables with umbrellas, moveable chairs, public art and benches and terraces where public snogging could occur.

And, of course, on days when the Vikings take the field in their new (lest we forget, billion-dollar) stadium sitting to the east of The Commons, legislation decrees that at least part of the park must convert itself into some kind of fair for fans (a fan fair?) where they will gather to eat, buy souvenirs and do other stuff that hasn’t yet been disclosed. (Actually, because the team wants extra days to set up and strike its tents and kiosks, the number will more likely total at least 27 days and possibly many more.)

From all this it sounds as though The Commons will do everything except end world hunger. And, hey, maybe Hargreaves Associates might find a place to install a vegetable garden and free-range chickens.

This seeming mishmosh is what happens when democracy reigns supreme. In assembling the design, Hargreaves held meetings with the public and considered 2,750 responses to a survey. And, although I haven’t seen the comments, I imagine that people asked for everything from a merry-go-round to a baseball diamond. As well as aiming to satisfy all or most of its customers, the designers had to cope with an odd site. Sitting in front of an enormous Wells Fargo office and residential complex now under construction, the park is divided in two by Portland Avenue and hemmed in on the south by light rail train tracks. And Hargreaves senior principal Mary Margaret Jones, who presented the plan, pointed out that the land has a 9-foot slope.

Jacob Frey, who represents the Downtown East neighborhood on the City Council, told the 150-plus audience who came to the downtown library to view the plan that the park’s purpose was to “boost the level of happiness in downtown Minneapolis.” Mayor Betsy Hodges, also in attendance, wisely did not object to that goal. And, as she pointed out to me, studies [PDF] have shown that natural environments increase people’s sense of well-being.

I don’t think that The Commons’ environment will be all that natural, but the plan that has emerged makes sense. The largest feature in the park, dominating the eastern portion, is the Great Lawn, a grassy oval bordered by terraces, where visitors would sun themselves in the summer or build snowmen in the winter. It sits in front of the new stadium and would contribute to game-goers’ stunning view of the city from their lofty perches in the stands. At one end of the lawn will sit a “shade structure,” which could be used for concerts or other performances. (The oval could hold 4,000 to 6,000 people.) The Great Lawn could also transform into a space for, say, an art or crafts festival, with tents and kiosks.

To the north of the oval are four “activity rooms,” sections bordered by hedges. Depending on the demands of the day, they would provide, among other things, space for chess players, a bocce court (curling in the winter) and a playground where kids would use a set of what look like giant Lego pieces to create their own structures. (Equipment would be collected and locked up at night in a small building near or under the performance area.)

To get to the western portion of the park from the east, strollers would have to cross Portland Avenue, which will narrow to two car lanes from three. The surface, according to Jones, would be “pedestrianized” — whatever that means. On game or festival days, the city could close the street. Among those who attended last night, the most common objection to the plan was its effort to keep Portland open. “Close Portland!” people wrote on whiteboards that sat around the lobby. I have to agree. If you’re going to build a park, let it be a park. Cars and trucks will find another way to get where they’re going. 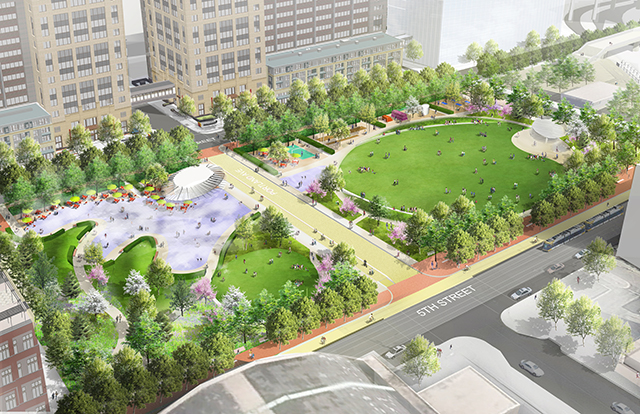 The western portion of the Commons is even more exciting. There’s another oval lawn, which planners named “The Good Lawn” (as opposed to the “Great Lawn”) where again, park goers could sun themselves or play frisbee. To the north of that will sit an amoeba-shaped plaza, which on hot, sunny days would be flooded with a 1-inch scrim of water. Children could wade in it, and adults could wet their toes. Blowholes would squirt up sprays, mists and fog. On cold days, it might simply be used as a plaza (dry) and in deep winter a skating rink. A pavilion housing a cafeteria and bathrooms would be stationed at the north end of the plaza along with tables, umbrellas and chairs for eaters and readers. (A question I failed to ask: will there be wi-fi?)

The remainder of the eastern portion will be bucolic, full of trees and native-to-Minnesota plantings, the likely site of marriage proposals and wedding photos. Tree-lined promenades border the park on the north and south, providing places to stroll, meet and greet others and show off new babies or toned bodies. A double row of trees will screen the park from trains on the south side. Oh, and one more thing stuffed into the west end of the Commons: a play area filled with artificial hills where kids can pretend to be mountaineers or space commandos.

People were enthusiastic. “I see this as a wonderful addition to the neighborhood,” said downtown resident Michael Kohlman, a recent transplant from Indiana. “My wife and I would definitely use it.” Steve Greenfield, who hails from Uptown, liked the plan except for the clumps of trees in front of the stadium. He fears that they would attract birds who would then fly into the glass-fronted stadium and plunge to their deaths. Like me, he also worried that The Commons had a bit too much packed into it. A former New Yorker, he observed, “There’s a lot in Central Park, but it’s huge.” In fact, it’s nearly 800 acres.

The budget for the park is $22 million, according to Jones, though costs have not been nailed down. Some $15 million will go for construction and the balance for design and engineering fees and operating expenses for the first year. Right now, there is no government dough allotted for The Commons’ construction. The Minneapolis Park & Recreation Board, The Commons’ natural owner and operator, felt that the park was thrust upon it without any consultation. And rather myopically (in my opinion, since how often does an opportunity to design and run a brand-new park in the middle of a city present itself?), decided to stick to its already determined priorities, among them RiverFirst. It will eventually own the land but lease it back to the city, and a nonprofit conservancy will operate The Commons.

Where will money come from? Private contributions. The Ryan Companies, which originally came up with the idea of a park, promised only to clear it of rubble and seed it with grass, which would not create a particularly interesting place — not a great setting for the Wells Fargo buildings it’s raising. So recently it contributed $200,000 to hire a consultant to mastermind the fund-raising effort. Whether philanthropic foundations, corporations and the public can come up with the money is an open question.

The funds raised could be insufficient to pay for all the elements in The Commons. In that case, designers may have to convene another meeting to survey the public on what they could live without.

You can say this for ‘The Commons’ downtown park: It has a lot going on