On the surface, Monday’s commemoration was about the better-than-projected success of the Green Line.

In paying homage to the region’s second light rail line, Metro Transit staffers wore green t-shirts and handed out green buttons to riders entitling them to discounts at merchants along the route.

But the press conference marking the one-year anniversary of the line’s opening quickly turned into something else: an exercise in saying “I told you so,” as politely as possible.

Ridership is exceeding expectations as is development along the line — both in downtown St. Paul as well as along University Avenue. But the speakers who lined up to praise the courage and foresight of political leadership (including their own) to stick to the long process of planning, funding and building the 9.8 mile transit line couldn’t help but talk about the next steps.

Just as the Green Line had opponents and controversy, so too will lines unbuilt.

“This was a tough project to get done but we did it because we knew this was important for the future of our community,” he said. “These are complicated projects to put on the street. But we are marching methodically forward and we’re going to get these lines built.”

“It’s a great day to celebrate the success of the Green Line and to reaffirm our support for this vision moving forward,” he said. 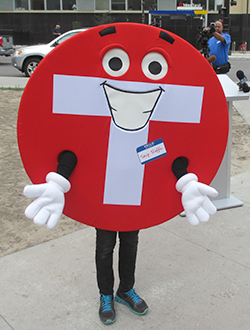 MinnPost photo by Peter Callaghan
Metro Transit mascot Skip Traffic was on hand
for the celebration.

The region is less certain about that vision, however. Two active lawsuits have challenged the alignment of Southwest LRT through the Kenilworth Corridor, between Cedar Lake and Lake of the Isles. And McLaughlin is part of the group of elected officials trying to carve $341 million out of the budget for the Green Line extension to Eden Prairie. Getting the budget back down to $1.66 billion is considered necessary to keep that project alive.

Even at that cost, however, the Legislature did not come up with the state’s 10 percent share of the project costs this year. And Republican control of the House makes that uncertain in 2016 as well.

The Green Line is unlike the other LRT lines — both existing and planned. Rather than connecting the region’s urban areas with the suburbs and major destinations like the airport and Mall of America, the Green Line operates more like a street car, helping people already within the two large cities move within them. While there were complaints early on that it was slower than promised, taking 50-minutes-plus to travel from end to end (since cut to 45 minutes), most riders are more interested in shorter segments within the 9.8 miles of new track between Union Depot in St. Paul and Downtown East Station in Minneapolis.

Ridership trends for the Green Line are clear, however. The number of riders used to secure federal funding for the $1 billion project was 26,600 a day midweek in 2014 and 27,500 this year. But by the second week of service last June it hit 31,851 a day and moved upward throughout the year. Average ridership is now 35,000 per day. Those are where the system expected to be in 2025, said Metro Transit General Manager Brian Lamb. For two weeks in early May there were just over and just under 40,000 riders per weekday. That’s what the daily ridership had originally been projected to be in 2030. 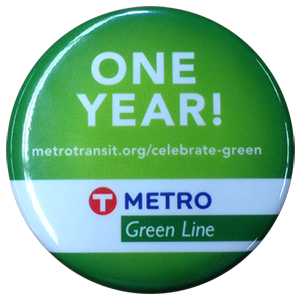 Buttons were handed to riders entitling them to discounts
at merchants along the route.

Ridership for the first full year is expected to reach 11.3 million. The total ridership includes weekend ridership which was in the 16,000 to  25,000 range, more when the University of Minnesota and the Minnesota Vikings were playing football at TCF Stadium.

The impact on development is less certain, and mostly anecdotal if still significant. Many of the completed and planned developments on University came from developers who said the Green Line was an important factor. A retrofitting of the Pioneer-Press building from office to apartments announced Monday was also attributed to the new rail line.

Coleman even pointed to recent demographic updates that put the St. Paul population at just under 300,000 as evidence of the economic impact of the Green Line. “The Green Line has proven to be what we always knew it would be, a catalytic event that created a first-class transportation system and helped us build on the future of the city of St. Paul,” he said.