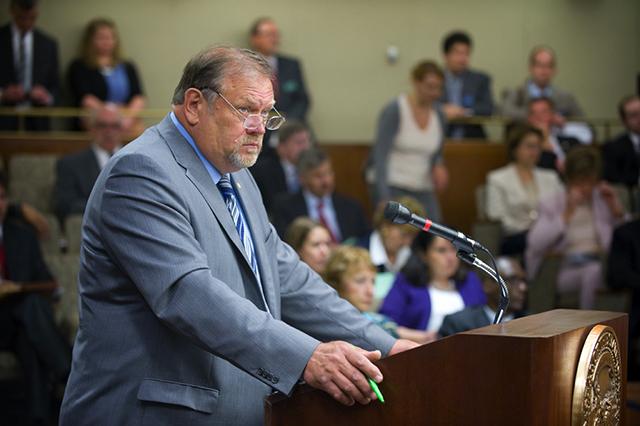 Around 3 a.m. on Saturday, June 13, after both the Minnesota House and Senate adjourned their one-day special session and most lawmakers had gone home, Democrats in the Senate were just getting started.

Three-dozen or so senators — most of the DFL’s 39-member caucus — gathered in a hearing room in an office building down the street from the state Capitol to let members vent their frustration. Their irritation wasn’t directed at Republicans, though. It was focused on their own leadership.

An increasingly vocal group of mostly metro-area senators felt Senate Majority Leader Tom Bakk had hatched deals with a Republican-controlled House in the final days of session and proceeded to ram massive budget bills through the process. Many senators were upset that they had mere minutes to read certain budget bills, and that other measures contained provisions that had never been seen before in committees.

One bill in particular had become the spectacle of the Friday special session: A $780 million budget bill funding agricultural and environmental programs. Gov. Mark Dayton initially vetoed the bill after session, but the final deal negotiated between his administration and Republicans still contained controversial changes, including one that eliminated the nearly 50-year-old Citizens’ Board of the Minnesota Pollution Control Agency; another that moved landfill cleanup reserves to the general fund; and yet another exempting sulfide mining projects from solid-waste disposal rules.

The agriculture and environment budget failed by a single vote in the Senate, a dramatic move that threatened to upend the fragile deal that was holding the special session together. After amending and slinging the budget bill back-and-forth between the House and Senate chambers for 10 hours, the bill finally passed in the early hours Saturday morning, with all of the controversial provisions still attached. Bleary-eyed and frustrated after session, some senators considered taking Bakk up on something he had offered the night before session: Let the caucus take an up-or-down vote of no confidence in him as the Senate majority leader.

“There was a lot of conversation going around. People were talking fairly upfront about it,” said Sen. Jim Carlson, DFL-Eagan, who, like all senators contacted for this story, did not break a Senate DFL rule by revealing specific discussions held in the private caucus meeting. “He knew there was a lot of unrest.”

The vote was never taken, but senators stayed in the hearing room until 4:30 a.m., some demanding a change in style from leadership. In the wake of the 2015 session, the caucus remains divided along two significant fault lines: on what part of the state they represent, and how they feel (and vote) on environmental issues.

The more dissatisfied members have put Bakk — who did not respond to multiple requests for comment — on review in the interim. Others, who support Bakk and his leadership style, are hoping time will repair wounds in the caucus before 2016, when the Senate will kick off a critical session and an election year.

“I’d say a little over half of our caucus is quite concerned about the leadership right now and what we are going to do about it and how we are going to make some changes,” said Sen. Barb Goodwin, DFL-Columbia Heights. “We are doing a performance review, let’s call it.”

Goodwin said her problems with Bakk started in the final weeks of session, when the majority leader announced a budget deal with House Republican Speaker Kurt Daudt three days before adjournment. What followed were around-the-clock committee hearings and last-minute dealings before most budget bills were taken up on the floor for votes the last day of session.

Goodwin said leadership, from Bakk down to the elected and appointed assistant leaders, did not communicate with rank-and-file members about what was in some of the major bills. Senate President Sandy Pappas, DFL-St. Paul, said chairs of Senate committees were surprised by provisions in their own final budget bills.

“It was a lot of: ‘How did that provision get in that bill?’ and ‘I’m the chair and it wasn’t approved by me,’ and ‘I wasn’t aware of that,’ ” Pappas said. “That happened with a number of our chairs.”

Some say the problems started earlier in session, in February, when Dayton held a press conference to call out Bakk for moving to nix a handful of pay raises the governor granted his commissioners. At the time, Dayton said Bakk didn’t tell him he was going to take the vote and called the majority leader a backstabber. Dayton met with a handful of senators after the vote, some of whom were concerned about their ability to work with the governor, their biggest DFL ally, for the rest of the session.

Other senators are looking beyond the session to an election year in which all 67 seats in the Senate are up for grabs. “Right now our leader isn’t just unpopular with us, he’s unpopular around the state,” Goodwin said.

“Some people are looking at what we are doing as leaders, and they are already completely disgusted with us and our failures to protect our environment,” Dibble said. “They are just going to be confirmed in their perception that it just makes no difference anymore who you vote for. The system isn’t working for them. It’s not that young people don’t want to come to the polls, but their level of cynicism is so high because of the failure of our system to look toward our future.”

In the end, Bakk maintained the support of a majority of his members, a group that includes those who were concerned that it would be worse to head into 2016 as a divided caucus. “[Bakk] wanted to feel like the caucus was behind him for him to go out and do the kind of fundraising he needed to do for elections,” Pappas said. “I think that was a major concern for a lot of the freshman. They depend on him to raise money for our elections because elections are incredibly expensive these days.”

Sen. Terri Bonoff, DFL-Minnetonka, said Bakk did what he could to reach a compromise with Republicans, who wouldn’t budge on a lot of their budget positions. “The fact that they, in essence, actually came to an agreement on every single bill and would have passed them, I thought was a win for leadership,” Bonoff said. “As a division chair, I can tell you it’s very, very very difficult to reach consensus. We were just worlds apart.”

There are plenty of members who appreciate Bakk’s personality and style of leadership. A towering Iron Ranger from Cook with a booming voice, Bakk spent years as a business agent for the Carpenter’s union — where he honed his skills as a negotiator — before coming to the Capitol in 1994, first as a member of the state House. An avid sportsman, he increasingly leaves the Capitol behind him during long breaks to go on fishing and hunting trips.

Still, this is not the first time Bakk has irked members of his own party. In 2013 and 2014, when the DFL controlled both chambers of the Legislature, Bakk butted heads with other Democrats over everything from a minimum wage increase to tax relief to the Senate office building, which will house members during and after a massive restoration project in the Capitol.

Yet Sen. Kent Eken, DFL-Twin Valley, said Bakk’s years with the union and decades in politics make him particularly effective at positioning his members for the best possible outcome in negotiations. “I do believe he brings some valuable skills to bear that are very important for a leader,” Eken said. “He’s a strong voice for the caucus, and I think he communicates well with the media.”

“A caucus is like a family, and like in any family, communication is important and there was a breakdown in communication,” Eken continued. “You go through difficult times in every party. [Environmental issues] have always been more divisive within our caucus, but the things that unify us are much stronger.”