Six years ago, John Frasz found himself in a jam.

A truck driver, Frasz was legally obligated to drive no more than 11 hours per day for safety reasons. When he refused to take a delivery that would have meant exceeding that limit, his employer fired him. After searching for work unsuccessfully for nearly two years, Frasz began collecting Social Security early, as a last resort. “Here I am without an income and I’m thinking I’m going to have to live in my car,” he said.

On Sunday morning, Frasz was one of several thousand people who filled the Minneapolis American Indian Center to listen to Vermont Sen. Bernie Sanders speak about his plans to seek the Democratic nomination to be president.

A vocal defender of Social Security

Frasz went to the event because Sanders, an independent who caucuses with the Democrats, has been a vocal defender of Social Security for years, which is how the senator had come to his attention.

“We have people stashing money in the Bahamas, and in order to save the economy you want to cut my Social Security?” Frasz asked. “You want to cut Medicare from people?”

Sanders, whose platform focuses on wealth inequality, education disparities and the environment, drew a mixed if enthusiastic crowd to the American Indian Center Sunday morning, with people cheering fervently, waving signs and chanting the candidate’s name.

Some of those who showed up, like Franz, are already dedicated supporters, though plenty of others were curious but undecided. Many – whether they were already in Sanders’ camp or not — said they had come out because they believed the senator would make a better candidate than the current Democratic front-runner, Hillary Clinton.

“Bernie has issues for the common people because he’s a common man,” said Diana Steben, a Sanders volunteer.

Sen. Bernie Sanders’ speech in Minneapolis on Sunday, courtesy of the UpTake.

University of Minnesota graduate Jacob Herbers was one of those who is undecided, but said that Sanders seems like a good choice since he seems less influenced than others by lobbyists and corporations. And considering Hillary Clinton, he said, Sanders has “less baggage and is more likely to attract independent voters.” 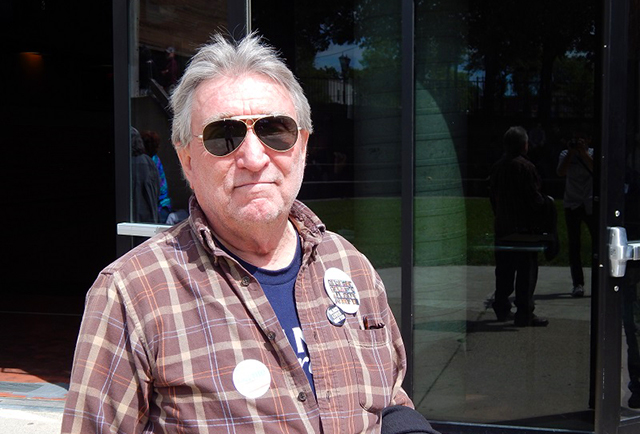 MinnPost photo by Kristoffer Tigue
John Frasz: “We have people stashing money in the Bahamas, and in order to save the economy you want to cut my Social Security?”

Justin Tyler Andrews, who’s attending Philadelphia’s Temple University next fall, said his biggest concern is the country’s economic inequality — one of Sanders’ key talking points. Andrews hopes that, if elected, Sanders will reverse the Citizens United ruling, he said, which he believes gives too much political power to corporations and those with the most money.

Russell Forrest said he was attracted to Sanders’ stance on free college tuition. Forrest has four sons, he said, but after a stroke left him partially paralyzed and a run of bad luck left him homeless, he couldn’t afford paying for their college. “My sons, they want to go to school. Let them pay for my boys’ education,” he said. “I always think of my boys first.”

Andrews said he believed the country is heading in a bad direction, with increasing wealth inequality, continuing racial and gender inequality and rising college tuition, but that there’s hope in Sanders’ radical solutions.

“He’s offering to overturn Citizens United. … He’s offering free college tuition, and he’s offering for an actual universal health-care system,” he said. “If Bernie fails to get the Democratic nomination but still runs for president, I will still campaign for him.” 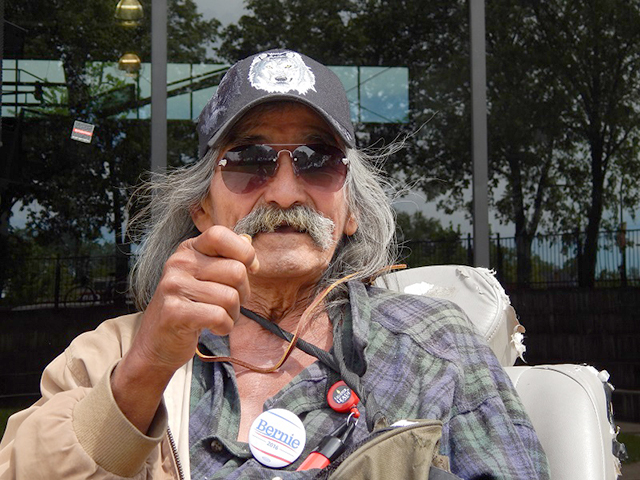 MinnPost photo by Kristoffer Tigue
Russell Forrest: “My sons, they want to go to school. Let them pay for my boys’ education.”