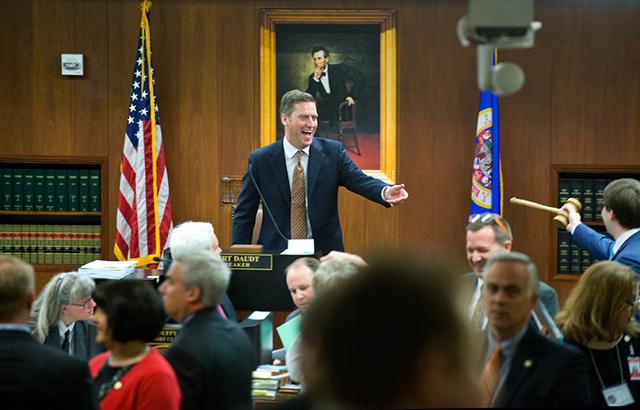 Photo by Tom Olmscheid/Workingpress Photo Agency
Speaker of the House Kurt Daudt reaching for his gavel at the start of the special session.

In February, Kurt Daudt found himself in an awkward situation. Two of the three most powerful players in state government were fighting – and he was in the middle of it.

The spat, between Gov. Mark Dayton and Senate Majority Leader Tom Bakk, had erupted after the Bakk-controlled Senate voted to suspend pay raises for more than two dozen of Dayton’s commissioners.

After the vote, Dayton called a press conference to tell the world that Bakk, a fellow Democrat, had “stabbed me in the back.” Dayton said he probably wouldn’t be able to sit in a room alone with Bakk again, he added, because “I don’t trust his word.”

It would have been easy for Daudt, a Republican and the newly minted speaker of the Minnesota House of Representatives, to let Bakk and Dayton continue to hash out their differences in the public, a strategy that would have allowed him to win some easy political points.

But that has never been Daudt’s style. In his three short terms in St. Paul, the former car salesman from Crown has quickly climbed the political ranks by being a diplomat and a people pleaser. And, true to form, instead of pouring gas on the fire, he used the incident to play peacemaker, helping to broker a compromise that allowed Dayton to reinstate the pay raises on July 1 and shift the power to raise commissioner salaries back to legislators.

The move would pay off down the road, as Daudt fostered good will between himself and both men. As the session progressed, and as the Bakk-Dayton relationship remained cool, Daudt often negotiated deals with each man individually, including bills that contained some of his caucus’ most controversial proposals: eliminating the Citizens’ Board of the Minnesota Pollution Control Agency and privatizing county financial reviews currently conducted by the state auditor.

“People had modest expectations because [Daudt] was perceived as new and very young, and Tom Bakk was seen as this seasoned negotiator and longtime legislator,” said former GOP House Minority Leader Marty Seifert, who’s a friend of Daudt’s. “The tables got turned. I think if you look at the expectations of people, it looked like he outmaneuvered the Democrats.”

For some, Daudt’s success in his first session as speaker was a direct result of that careful and measured approach. For others, Daudt looks good mostly by comparison, since his DFL counterparts are working to mend the dissension in their ranks. “The Republican caucus looks more harmonious than the relationship between Tom Bakk and Mark Dayton,” said retiring Rep. Ryan Winkler, DFL-Golden Valley. “The bar is low enough.”

After the November election, when Republicans swept outstate races to regain control of the Minnesota House, Daudt took deliberate steps to unite the usually fractious House Republican caucus behind him.

It wasn’t an easy task: Daudt was challenged for the speaker job by two more seasoned House Republicans, Rep. Rod Hamilton, R-Mountain Lake, and Rep. Matt Dean, a Republican from Dellwood who had once served as the House majority leader.

In the end, Daudt won the speaker’s gavel thanks to the backing of many of the new freshman legislators, members whom he had worked for all fall on their campaigns.

One of the ways he managed to keep Republicans together was by declining to seek political retribution. Instead, he handed out high-powered committee gavels to veteran lawmakers, including those who had questioned his ability to run the caucus.

But he faced other challenges early on, specifically when it came to how much Republicans wanted to spend on the state’s budget over the next two years. Democrats were already proposing to spend nearly all of a $1.8 billion budget surplus on education and other state programs. Some Republicans wanted to see deep cuts in the budget, despite the surplus, while others wanted to see more money pumped into education and roads and bridges.

“The first few times we had some really hard discussions,” Rep. Denny McNamara, R-Hastings, said. “We’ve got extremely diverse interests in our caucus, but we had to realize we were just one leg of a three legged stool and we needed to vote together.”

“Kurt’s style is to let people talk and take in their views,” House Ways and Means Chairman Jim Knoblach, added.

Republicans ultimately unified behind some big and controversial ideas: They proposed more than $2 billion in tax cuts and $1 billion in spending cuts in health and human services. But as committee chairs got to work on their budget proposals, Daudt stayed in the background. Having never held a committee gavel himself, he wasn’t deeply versed in any particular policy area, and he knew he needed to defer to those who were.

“He gives his chairs as much autonomy as they can possibly have up to a certain point, where you have to pull a deal together,” said House Taxes Chairman Greg Davids, R-Preston. “He gave me great latitude to put a [tax] bill together. That to me as a chair is so important. I don’t know how I would handle it if a speaker would meddle in my work.”

Steve Sviggum, who served as a Republican speaker of the House from 1999 to 2007, said Daudt’s calm demeanor and friendly style helped him not only tame a divisive caucus, but work with both Dayton and Bakk.

That became particularly apparent over the last six weeks. On the final weekend of session, in May, it was Daudt and Bakk who hatched the final deal that passed through the Legislature. But after Dayton vetoed three budget bills and called a special session, it was Daudt who negotiated with the governor to strike final deals.

“He’s pleasing to be around,” Sviggum said. “He doesn’t get too confrontational. He doesn’t tick people off, making it tough to come back again and pull things together. Kurt was wise enough not to burn bridges.”

Not everyone is happy

But the end result of the 2015 session was still a mixed bag for Republicans.

The House GOP’s $2 billion tax cut plan fell apart in the final days of session, when no agreement could be reached to pass the proposal. Beyond extra dollars put into the state’s nursing homes, some outstate advocacy groups say Republicans had little to show for their early promise to focus on rural Minnesota. And an idea to scrap MinnesotaCare, a subsidized state healthcare program for low-income families above the poverty line, also fizzled. Instead, Bakk and Daudt agreed to leave nearly $1 billion on the bottom line to try and figure out a solution to tax cuts and transportation issues next year. Lawmakers set up a commission to look at the future of MinnesotaCare.

“Some of us conservatives realized we didn’t get a whole heck of a lot of out this,” said Rep. Steve Drazkowski, R-Mazeppa. “We have a hard time putting things out there or finding things that we can hold out for that are really good for conservatives.”

For Drazkowski and others, expectations are high to pass a major tax cut bill in 2016. “Given that reality, and the fact that we do have money on the bottom line, it was communicated to us that that money is there for next year and we are going to go forward and pursue reducing the tax burden on Minnesotans,” he said.

Sviggum called it a “brilliant” move on Daudt’s part to push a tax cut bill off until next year. In an election year, Democrats are less likely to push for a gas tax increase and more likely to agree to crowd-pleasing tax cuts, he said.

Democrats, of course, have been less generous in their assessment of Daudt. Winkler was among the most vocal critics of Daudt’s performance as speaker. In a particularly heated floor session in March, Winkler yelled from the House floor that Daudt was “acting like a dictator” for ignoring DFL minority calls to take a roll call to adjourn.

“He didn’t fall flat on his face,” he said by way of judging Daudt’s first session, “but not much happened either.”

But Winkler still saves his toughest criticisms for his own party. Bakk and Dayton never got on the same page fully in terms of strategy, he said, and the Senate majority leader is dealing with unrest in his own caucus, where members are upset over some of the last-minute deals he made with Daudt.

“The fact that the governor and the Senate majority leader could never get together on one page and put together a unified strategy and took multiple stumbles along the way,” he said. “That made Daudt’s failure to screw up look good.”