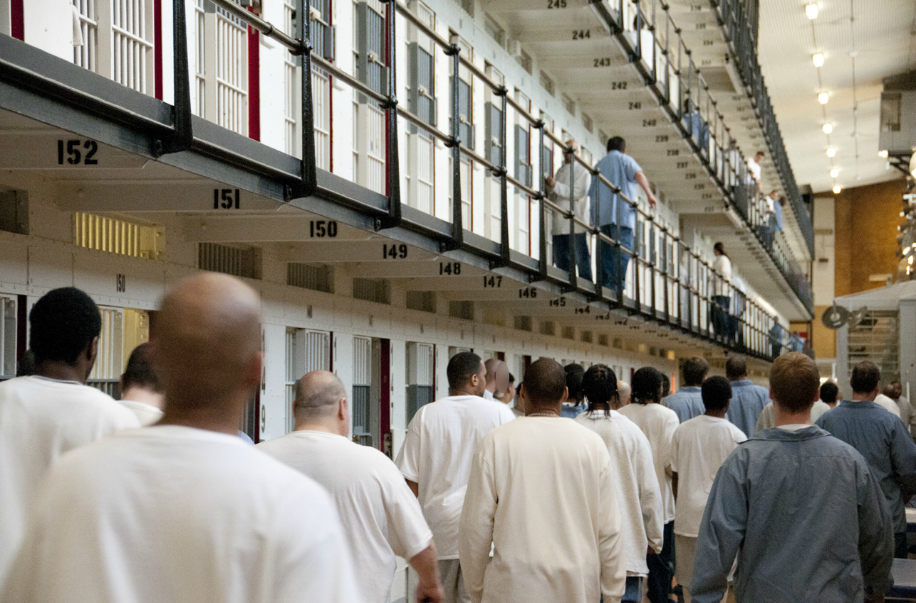 In 2013, something remarkable happened in New Jersey.

After reforming its drug policies and rethinking its practice of throwing ex-cons back into state correctional facilities for parole violations, the state saw its prison population drop to 19,528, the lowest point in two decades, and a 28 percent decline from its late '90s peak.

That same year, in stark contrast, Minnesota's prison population hit one of the highest levels in its history.

Since 2000, a meth boom, harsher penalties for DWIs and other factors have made the state’s prison population jump from 6,200 to more than 9,450 as of January 2013, according to Department of Corrections data. And though Minnesota still has one of the smallest prison populations​ in the country, second only to Maine, the rate of incarceration — the number of inmates per 100,000 residents — went up 42 percent.

At the same time, the index crime rate plummeted 27 percent statewide to the lowest point since Lyndon Johnson was in the White House. Index crime includes violent and property crimes, such as robbery, aggravated assault and burglary.

The juxtaposition of these two statistics bucks national trends, according to a recent study by The Brennan Center for Justice. Though crime fell across the country, imprisonment rates dropped in 15 states, while another 23 saw increases of less than 20 percent. The growth in Minnesota's prison population represents the second sharpest rise in the country.

For taxpayers, it’s an expensive problem. It costs more than $30,000 in Minnesota to house one inmate per year, according to the Department of Corrections. And the price could soon go up.

As a consequence of the unprecedented growth in its prison population, Minnesota is running out of places to put its inmates. In order to manage overcrowding, the prison system wants to expand its Rush City facility to accommodate 500 more beds. That means the Department of Corrections will ask legislators for $85 million in next year’s bonding bill to fund the project.

One way or another, lawmakers are going to have to address Minnesota’s rising prison population, says Mark Osler, University of St. Thomas law school professor and retired assistant U.S. Attorney.

“If nobody pays attention to it, and they just keep overcrowding the prisons, eventually there will be a federal lawsuit,” says Osler. “Then people will start to pay attention, and then the Legislature will start to do its job.”

Historically, Minnesota’s corrections system has been known for two things: a low prisoner population and a progressive philosophy toward punishing criminals — a notion that offenders can be rehabilitated.

In the 1980s and ‘90s, when states like California were deluging their prisons through tough-on-crime sentencing policies, such as controversial three-strikes-you're-out laws, Minnesota stayed the course. As a 1999 report by former corrections commissioner Orville B. Pung would note, even as other states moved to more punitive-minded sentencing practices, Minnesota had “never really deviated from its early hope that the operation of prisons would result in a safer society by making prisoners better people.”

The state was among the first to adopt sentencing guidelines, a roadmap to help judges find the appropriate punishment for offenders. It also instituted a commission tasked with developing the guidelines and studying felony sentencing data to make sure Minnesota’s prisoner population didn’t exceed capacity and lead to overcrowding.

In 1981, around the time those guidelines went into effect, state prisons housed a mere 1,892 people. By the end of the decade, the population had grown to slightly more than 3,000, still far below the national average.

By 2000, however, Minnesota’s incarcerated population almost doubled from the decade prior. As of January 2015, it’s lingering at about 9,950.

Most of that growth took place in the first five years of the millennium: In that time, the number of prisoners per 100,000 Minnesotans jumped from 124 to 166, or 34 percent. The rate peaked in 2009, at 184, and declined slightly the next two years before gradually growing again in 2013.

In comparison, California and New York, two of the country’s largest corrections systems, have seen some of the most significant prisoner declines in the United States. Following a federal court order to ease massive overcrowding, California cut its incarceration rate by 23 percent from 2009 to 2013. New York reduced its rate by about 27 percent from 2000 to 2013.

Some wonder if the enhanced penalties and other new laws driving the incarceration rate signal a change of values from the hope described by Pung.

“I’m not seeing anywhere near the same reform spirit that we had 30 to 40 years ago,” says David Schultz, a political science professor at Hamline University. “I think we’re making it easier for people to get in prison.”


Minnesota an outlier
When the Brennan Center for Justice compared changes in property and violent crime rates to incarceration rates in all 50 states from 2000 to 2013, Minnesota stood out for its big jump. (Only one state was worse: West Virginia's increase was too high to fit in the charts below.) 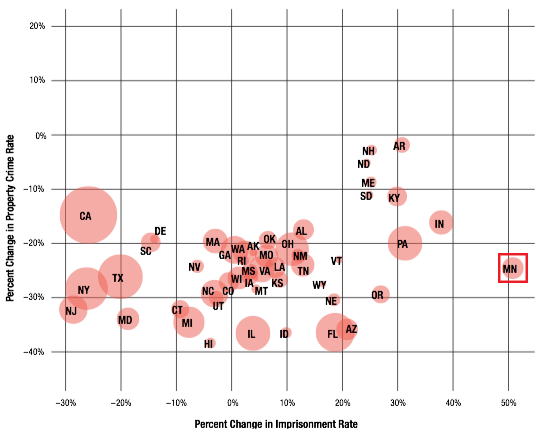 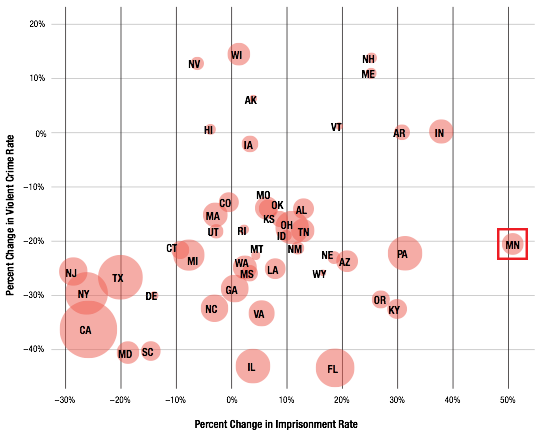 Source: The Brennan Center for Justice

The war on drugs, drunks

Part of the incarceration rise can be explained by an increase in the number of criminal statutes on the books. Minnesota Justice Paul H. Anderson recently illustrated the magnitude of this in a speech to William Mitchell Law Review: In 1965, Minnesota’s criminal code was 32 pages long, Anderson said. In 2013 it was 228. If the code continues to grow at that pace, it will hit 1,770 pages 50 years from now.

“I can’t remember a legislative session where the Legislature didn’t create new crimes and enhanced penalties,” says Teresa Nelson, legal director for the Minnesota chapter of American Civil Liberties Union. “So when you have longer sentences, you’re going to have more people in prison.”

In 2001, the Legislature passed a law creating felony-level DWI. In 2003, Minnesota courts sent 67 people to prison for driving under the influence. By 2005, that number had grown to 227. It peaked in 2008 at 323. Lawmakers also passed a series of other tough-on-crime measures around this time, increasing penalties for offenses like furtherance of terrorism, domestic strangulation and criminal sexual conduct.

Then there was the war on drugs. From 2000 to 2005, the number of Minnesotans in prison for drug offenses more than doubled to 2,178. To put it in perspective, that’s more than the state’s entire prison population circa 1981. As of 2013, drug offenders still accounted for about 1,633 of the inmate population.

The Legislature passed several new laws designed to crack down on illicit substances in the late '90s and early-to-mid 2000s, including creating a felony offense for attempt to make meth and a law treating meth the same as heroin. Today, half those in prison for drug offenses are there for meth.

Contrary to Minnesota’s reputation for progressive policymaking, the state is heavy-handed when it comes to the way it punishes users and sellers of drugs. It has considerably harsher penalties for drug crimes in comparison to other Midwest states, and so far attempts to reform those laws have all fallen flat, says Richard Frase, criminal law professor at the University of Minnesota. “Every time that that’s proposed, the police and the prosecutors just line up and say ‘no, no, no — you can’t change a thing.’ "

Prison administrators trumpet Minnesota’s wide use of probation and supervised release as a successful alternative to putting criminals behind bars. But for many offenders, these programs become winding roads looping right back into a prison cell. About 60 percent of prison sentences come from violations of probation or supervised release, according to statistics provided by the DOC.

This is a problem, says Nekima Levy-Pounds, a law professor at the University of St. Thomas and president of the Minneapolis chapter of the NAACP. In many of these cases, courts are throwing offenders in prison for violations like missing appointments or failing a drug test, and not for committing new crimes. “That’s a lot of money to pay for someone who has not recommitted an offense, or committed a new offense, to be incarcerated,” says Levy-Pounds.

For all the expenses associated with imprisoning more Minnesotans, it doesn’t appear to be paying off. According to the Brennan Center, incarceration isn’t responsible for driving down crime. The study attributes the national decline to factors such as decreased alcohol consumption, growth of income and the introduction of advanced statistic-based crime-fighting tactics.

It’s impossible to predict with any certainty where Minnesota’s imprisonment rate will be 10 years from now.

The state is counting on the slow growth of recent years to continue, rather than seeing another spike like in the early 2000s. The Department of Corrections and sentencing commission forecast the population will increase by 1,000 from 2014 to 2024. That number also accounts for lengths of inmate sentences and the anticipated impact of recent law changes. Yet there are factors that can’t be foreseen, and it’s anyone’s guess what new laws or enhanced penalties the Legislature will create over the next decade.

Fixing the problems facing prisons in Minnesota — and across the country — is no simple task.

“There’s no one agency or person who’s at fault,” says Eisen.

For now, the DOC has contracted with 18 county jails across the state to manage its roughly 500 overflow prisoners, which Deputy Commissioner Terry Carlson acknowledges isn’t an ideal long-term solution. Jails don’t have the same drug treatment, medical and other programming as prisons. They’re also built to be holding facilities, not rehabilitation centers.

A better solution, says Carlson, is the department’s “Challenge Incarceration Program,” which grants early release for eligible offenders who complete a rigorous 18 months of chemical dependency treatment and other courses, military-style boot camp and intensive community supervision. So far, the program has been a success, and the DOC has seen a low rate of recidivism from the inmates who go through it, says Carlson. Right now, it holds about 260 inmates, but the department is planning to expand it next year to 45 more.

Even with more prisoners, Carlson says the values driving how Minnesota punishes its criminals have not dramatically changed, evident by Minnesota's still-low incarceration rate relative to most other states. “I don’t think there’s been a huge shift in thinking about community corrections and the value of trying to keep people in their communities in probation versus coming to prison," she says.

But the numbers don't lie. And with more inmates comes a higher demand for resources, which means the DOC must find ways to adapt. “And then,” says Carlson, “we have to look for places to put these offenders, and we have to ask for money.”

Minnesota crime is at a 50-year low. So why are we imprisoning more people than ever?