Minnesota’s prisons have a population problem.

As MinnPost reported earlier this week, the state’s incarceration rate jumped 42 percent from 2000 to 2013, due in large part to crackdowns on meth and DWI offenders during Gov. Tim Pawlenty's time in office. As a consequence of that increase, the Department of Corrections is running out of places to put inmates, and will ask the Legislature for $85 million next year to expand one of its facilities.

But Minnesota’s prison system has another big problem: People of color make up a vastly disproportionate percentage of the inmates.

Here are a few stats that didn't make it into the story from earlier this week:

This is not a new problem. In its report to the Legislature this year, the Minnesota Sentencing Guidelines Commission – which develops criminal sentencing guidelines and monitors data – broke down race of felony offenders over the past 35 years. 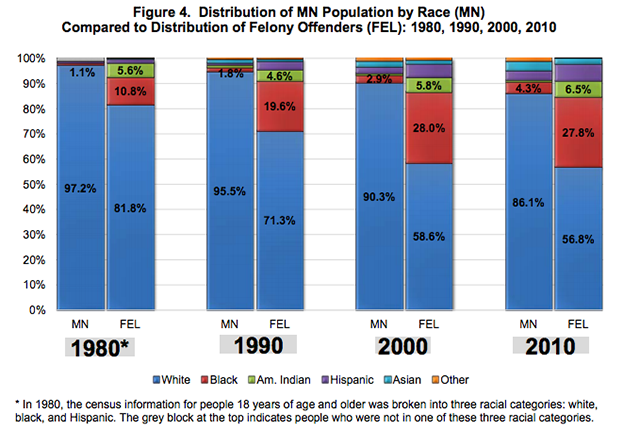 Native Americans have consistently accounted for a sliver of Minnesota’s racial makeup. The 1980 census didn’t even include them as a race category. Yet that year they comprised 6 percent of felons.

As a 2013 report from the Council on Black Minnesotans points out, people of color face many disparities in Minnesota beyond the criminal justice system, including higher rates of poverty, infant mortality and high school dropouts.

“Minnesota has some of the worst social economic disparities between blacks and whites around the country,” says Richard Frase, criminal justice professor for the University of Minnesota. “And people don’t get any better sitting in prison for a couple years.”