A key Minneapolis City Council committee has decided that the proposed Dinkytown Commercial Historic District should be, uh, smaller.

A unanimous vote of the council’s Zoning and Planning Committee amended a historic designation, shrinking it by removing five buildings on the periphery of the area just west of the University of Minnesota that centers on 14th Avenue SE and 4th Street SE.

The move means the district’s historic designation is focused on its importance during the early 20th Century, when it was a commercial area at the intersection of two major streetcar lines. What that leaves out is the narrative of the area’s importance to the 1950s beat culture, the 1960s counterculture and the 1970s antiwar movement.

The origins of the campaign to get historic designation, however, came in response to development pressures, including a proposal (since rejected by the city) to build a mixed-use building including a hotel across the street from the Varsity Theater. But backers of the district have been as intent on preserving the district for its political and social significance as they are for preserving historic buildings.

Council Member Jacob Frey, whose Ward 3 includes the proposed district, said he couldn’t support such a large area — one that tried to encompass a wide historical period, from 1899 to 1972 — because he couldn’t identify a unifying theme.

“The only thing that I can determine is it depends on the individual,” Frey said. “The critical time period for every individual is different and tends to coincide with the period when they were having fun — dating someone hot, smoking and staying  up late — but that’s not history, that’s college.”

Frey also made the point that the larger geographic area approved by the city’s Heritage Preservation Commission would have meant that a McDonald’s and a smokeshop built in the 1970s would be included. Frey does not have a vote on the committee, but his proposed amendment was offered by committee Chairwoman Lisa Bender.

“I want to be clear that a historic district means we are saving the buildings and materials in an area of the city where there is significant development pressure,” Bender said. That action reduces the value of the property within the district significantly. “That is not a decision that I make lightly,” she said.

While Bender said she couldn’t support protecting structures that date only back to the 1970s, she supports the smaller area of buildings from 1899 to 1929. The district would still include buildings such as the Loring Pasta Bar, Annie’s Parlour, Dinkydale Mall and Al’s Breakfast. It also includes one building outside the contiguous area of the district. That would be the former Minnesota Bible College building at 15th Avenue SE and University — better known as the Dinkydome. 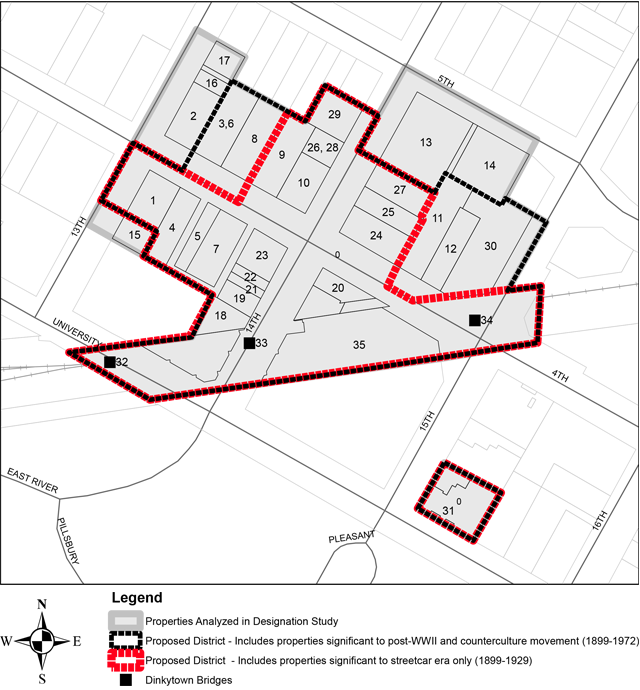 City planning staff has recommended approval of the historic district, saying that the less-than-four-square-block area met five of the seven criteria needed under city code to support designation. An area qualifies for designation if it meets any one criterion.

The plan was endorsed by the Marcy-Holmes Neighborhood group but opposed by the Dinkytown business association. The council action is a continuation of a debate held last year over how historic areas are protected and whether the city should make it more difficult to redevelop areas that could accommodate more density. Many of the same areas where commercial areas grew up retain similar commercial and multifamily uses because they are on bus lines.

The historic designation, if endorsed by the full council on July 10, would be followed by the creation of design guidelines that would govern how existing buildings are altered and new buildings are designed.