“Geography in downtown St. Paul’s case was indeed destiny, both for better and for worse.”

That’s how writer Larry Millett described the setting of the Minnesota capital city in his “AIA Guide to Downtown St. Paul.” Its presence on the top of bluffs carved by the Mississippi protected the early town from flooding, while accessible river landings helped it become the northern steamboat terminus.

Yet that same “peculiar geography” continues to challenge the city’s modern-day goal of re-establishing a visual and physical connection to the river. A commonly expressed concern is that visitors to the downtown might not even notice that one of America’s major rivers is “down there.” The railroad tracks and roadway between the bluff and the river don’t help much either.

The expansive Great River Passage Master Plan wants to remedy that disconnect. The plan, adopted in 2013, “presents recommendations for orienting the city toward the river.”

“The idea is to think of all 26 miles of riverfront as one big park,” said project manager Lucy Thompson. The city would like to secure a public edge for public access and then connect it to the neighborhoods, including downtown.

One of dozens of recommendations within the master plan could come sooner than others: The River Balcony. “With panoramic views from a series of ‘outdoor rooms,’ the River Balcony will provide a great year-round destination for shopping, lunch or to relax with friends after a concert or sporting event,” states the plan.

And though it’s sometimes referred to as “St. Paul’s High Line” — a reference to the popular park repurposed from a rail trestle in Manhattan — calling the linear park the “Side Line” might be more apt, given its location. The balcony would overlook the river from the edge of downtown and be incorporated into existing and proposed buildings between the Science Museum of Minnesota and Union Depot, with Kellogg Mall Park at its center.

The balcony could also provide a launching point for access down to the river — a special challenge because of Shepard Road and railroad tracks. What it would look like; how it would reconcile public and private segments; how development agreements with private developers would work — are all questions to be answered in a separate River Balcony Master Plan, Thompson said. “It could be an easement. It could be a grant of ownership to the city,” she said. “The bottom line is there will be public access.”

The brilliance of the proposal — financially at least — is that those same private segments would be paid for privately. And the developers likely to be the first to incorporate it are OK with that.

“We were working with the city to get them focused on getting the project going because we thought it would be a great addition to the city as a whole,” said Herbert Tousley IV, chief development manager for Exeter Group. Describing it as a great placemaking attraction, Tousley said, “we’re all for getting it going.” 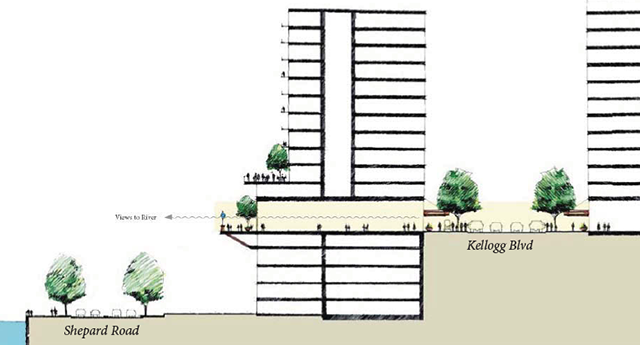 Exeter is in the midst of redeveloping the 17-story Custom House, which sits between Kellogg Boulevard and the river bluff. Originally built in phases between 1934 and 1961, the building will eventually hold 203 apartments, a 149-room Hyatt Place hotel and a 5,000 square-foot restaurant. The 30,000 square feet area being held in reserve for a future River Balcony is part of the complex’s 1961 addition: a six-story building on the edge of the bluff. Tousley envisions indoor and outdoor space with an exterior balcony connected to space within the shell of the building.

“We’re optimistic it’ll go forward or we wouldn’t be laying that space aside,” Tousley said. “There is a disconnect between downtown and the river. From the standpoint of people living and working downtown, it’s a huge amenity to make that connection.”

Thompson said the indoor-outdoor aspects of the Custom House segment reminds her of the Chelsea Market area of the High Line. There, the elevated park opens up into the interior of the market building, providing space for artist and food booths out of the sun and out of the rain.

The other major redevelopment that could continue the linear park is the Ramsey County Government Center-West Building and the abandoned former jail next door. Both are part of a $13.5 million demolition project, which the city hopes will attract private developers when completed. Thompson said the city hopes to negotiate a development agreement with any future buyer of that 3.88 acres for continuation of the River Balcony.

An open house to present the concept of the balcony and solicit public comments is being planned for later in the summer.