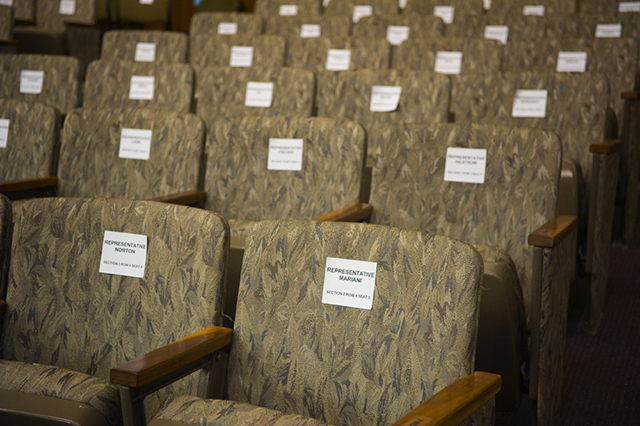 Photo by Tom Olmscheid/Workingpress Photo Agency
The Minnesota House will meet in Room 10 of the State of Building for the upcoming special session.

There’s a tentative deal to bring lawmakers budget stalemate to an end, and this one might stick.

In a statement released Wednesday morning, DFL Gov. Mark Dayton said he and Republicans in control of the Minnesota House of Representatives reached an agreement on all outstanding budget provisions, and that he planned to call a special session as soon as leaders of all four legislative caucuses signed off on the deal.

The final deal will include $5 million as part of the jobs-and-energy budget, which Dayton wanted to help Minnesotans with disabilities find work and help prevent homelessness among those suffering with mental illness. The final deal will also include an electric rate break for mining and forestry industries in northeastern Minnesota, but it will have added “consumer protections,” according to Dayton’s release.

Leaders also agreed to fix a quirk in state law to allow the city of Rochester to use local sales tax dollars as part of a major expansion of the Mayo Clinic.

In his statement, Dayton said the negotiations have been “extremely difficult,” but that the sign of a true compromise is that no one is happy with the final deal.

“Proponents and opponents of various policies across the political spectrum will be as unhappy with certain features as we, who ultimately had to accept them to avoid another government shutdown, the indefinite layoffs of 9,500 state employees, and severe disruptions of important public services,” he said.

Nailing down the details in the jobs-and-energy budget is the latest agreement, but Dayton and Republicans have been going back and forth on a budget deal for weeks. Dayton vetoed three budget bills, including education and agriculture and the environment, after regular session adjourned on May 18. Last week, leaders announced a deal to spend $525 million out of a $1.8 billion surplus on education over the next two years, but issues remained in other bills, prolonging the negotations. On Monday, Dayton agreed to drop his opposition to one of the biggest sticking points — a provision that allows county governments to go around the state auditor’s office and seek reviews from private firms — clearing the way for the tentative deal.

Dayton expressed concerns earlier this week about other language in the jobs-and-energy bill that would require people who used alternative energy sources to pay more. But similar language to what the Legislature passed will be included in the final deal, said GOP Rep. Pat Garofalo, the author of the bill.

In an email statement on the deal, House Speaker Kurt Daudt touted the “third lowest percent increase in general fund spending in over 50 years,” holding the line on tax increases and more money for education, aging adults and transportation.

“Minnesotans expect us to come to St. Paul and lead by working together. The House Republican majority’s aim from the beginning was bringing government spending more in line with family budgets.

But he may have preempted the budget news with a tweet Tuesday night.