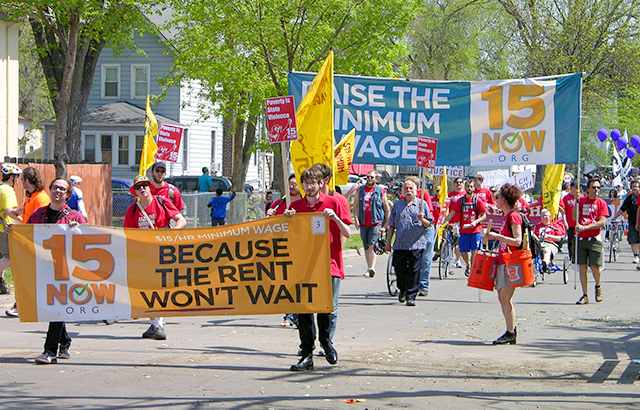 Creative Commons/Alan
Members of the 15Now Minnesota organization participated in the May Day parade last month.

Someone — perhaps Thomas Jefferson — said that the best government is the government closest to the people.

That might be the rationale for activists hoping to pressure city councils to take on issues on behalf of the working poor that were once thought to be the province of state and federal officials. Of course, it could also just reflect the fact that local governments in large American cities tend to be dominated by liberal voters and elected officials who are more open to taking action on minimum wages and paid sick leave when state and federal politicians won’t.

Now, in response to a handful of victories in places like Seattle, San Francisco and Los Angeles to raise the minimum wage above the state requirement (and to the 19 local governments that have imposed paid sick leave), trade groups are taking the issues to the level of government where they are strongest: convincing state Legislatures to pass laws that would block the ability of municipal governments’ to pass wage and benefit ordinances.

In other words, government closest to the people is best — unless you’re losing there. Then government a bit further away, be it in state capitals or Washington, D.C., begins to look a lot better.

Pushback from the Minnesota Legislature

The fight is slowly converging in Minnesota. For nearly a year, activists organized as 15Now Minnesota have been pushing a $15-per-hour minimum wage in Minneapolis and at the Minneapolis-St. Paul Airport. (The Seattle-based organization had its first victory via a voter-approved initiative in SeaTac, the Washington city that contains Seattle-Tacoma International Airport.)

While Minneapolis Mayor Betsy Hodges has said she does not support the city acting alone when it comes to changing the minimum wage, she is pushing for other local-only changes. Her Working Families Agenda calls for local ordinances requiring private employers to offer paid sick leave. She also wants local programs to enforce fair pay laws and to require employers to give better notice when work schedules are changed or canceled. (A similar package was introduced in the state Legislature, but did not make much progress.)

Many of those initiatives are still in the discussion stage. Hodges and the city council have agreed to form two staff-council work groups: one to study the effects of a Minneapolis-only minimum wage; the other to prepare ordinances on the Working Families Agenda for debate later this year.

Yet even these cautious steps prompted pushback at the state Legislature. Earlier this year, Rep. Tony Albright, R-Prior Lake, introduced a bill that would have preempted Minnesota cities and counties from imposing minimum wages or private-sector benefits in excess of state or federal government requirements. The Senate version of the bill was sponsored by two Republicans and three DFLers, including chief sponsor Lyle Koenen, of Clara City.

Supporters of the measures include the Minnesota Retailers Association and the Minnesota Restaurant Association. “Minnesota’s entry-level wage should be uniform across the state in order to allow retailers to compete on a level playing field,” wrote the retailers group in its 2015 legislative priorities. “Local wages above the state minimum will have an impact at the retail level, resulting in higher prices for consumers and threatened local jobs, especially given the mobile nature of commerce today.”

The House language didn’t end up in the final omnibus jobs bill that Gov. Mark Dayton vetoed, but did find its way into the House omnibus jobs bill that passed on a mostly party-line vote. Minneapolis elected officials took the bills seriously enough to send a letter of protest to Rep. Pat Garofalo, R-Farmington, chair of the House jobs and energy committee.

“As locally elected officials, we are honored to be given the opportunity to make local decisions on behalf of the residents of Minneapolis, and we are best able to respond to the needs and values of our neighborhoods and the city as a whole when we have the power to do so,” said the letter signed by Hodges, Council President Barbara Johnson and Council Vice President Elizabeth Glidden.

Glidden said this week the letter was kept general in order to keep the focus on the principle of local flexibility. Though the current debate is around minimum wage and paid leave, Glidden said, “tomorrow it could be something else.”

Preemption is not expected to reappear at the upcoming special session of the Legislature. And Council Member Alondra Cano, the city’s most outspoken advocate for a higher local minimum wage, said she isn’t sure how far the preemption bill would have advanced in the Legislature given the Democratic control of the Senate and the governor’s office.

But it did seem to suggest that GOP legislators think cities have the legal authority to act on their own. That is something of a gray area now; while there is no specific preemption in state law, neither is their express authority.

Minneapolis City Attorney Susan Segal said she thinks the city would be on “solid legal ground” on wages and benefits ordinances under its general police powers and its authority to protect public health.

But Dan McElroy, executive vice president of the restaurant association, said the law is less clear and that the association maintains that Minneapolis and other cities are already prevented from acting independently of the state. Minnesota is a “Dillon’s Rule” state, named for an Iowa judge who ruled that local governments can only exercise power explicitly or implicitly granted by their state governments. According to an explanation of the rule by the National League of Cities, “State constitutions vary in the level of power they grant to local governments. However, Dillon’s Rule states that if there is a reasonable doubt whether a power has been conferred to a local government, then the power has not been conferred.”

Strategy based on the tobacco wars

Minnesota is among many states debating the issue. As more and more cities adopt pay and benefit ordinances, more and more states are stepping in to preempt. A recent USA Today article noted that President Obama — beginning with this year’s State of the Union address — has been pushing states and cities to take wage and benefit actions he cannot get through Congress. The article ran the same day Obama’s Labor Secretary Thomas Perez was in the Twin Cities as part of a “Lead on Leave” tour, thanking St. Paul and Minneapolis for giving paid parental leave to city workers.

“It’s been a good year and a bad year,” said Mark Pertschuk, director of Preemption Watch in Oakland, a project of Grassroots Change that promotes local efforts to promote public health initiatives. “Where democracy is functioning is at the local level,” he said, but added that “it’s been particularly challenging as far as state preemption.”

Ellen Bravo is executive director of Family Values @ Work, which works with local partners to push for benefits such as paid sick leave. She traces pushback to politicians in her home state of Wisconsin, especially Republican Gov. Scott Walker. After Milwaukee voters approved a paid-sick-leave initiative — and after it withstood legal challenges from opponents — Walker successfully pushed a preemption bill that blocked it. That law was later discussed at a meeting of the American Legislative Exchange Council (ALEC), a conservative group that pushes for business-friendly bills at statehouses around the country, eventually leading to an update of the group’s model legislation, the “Living Wage Mandate Preemption Act.”

“Because they couldn’t compete at the city level, they tried to take away the right of citizens to make these decisions for themselves,” Bravo said. Just as wage and benefit advocates are focusing more organizational power at local governments, ALEC has recently formed the American City County Exchange to influence action — and reaction — at the local government level.

Regardless of what level of government is considering it, Americans support higher minimum wages and paid leave, according to national polling. An Associated Press-GfK survey conducted in February, for example, found that 60 percent of those asked endorsed higher minimum wages, paid sick leave and paid parental leave.

Support in larger cities, which often have higher percentages of Democratic-leaning voters, is likely even higher for such measures. That provides political cover for local elected officials. Still, the movement has been relatively slow building and has blossomed only in the last year, after a handful of cities managed to pass minimum wage increases and paid parental leave. Even then, it was activists leading elected officials on the issue, rather than the other way around.

As Minnesota’s largest and most liberal city, Minneapolis is being pushed to play the leading role on the issues in Minnesota. Cano said she hopes the task force study on the minimum wage will identify both facts and myths about the economic effects of a city having a higher wage than those surrounding it.

Already the business community is expressing concerns. “While Minneapolis plays a central role in the Twin Cities economy, the city is not as dominant within the region as is the case for other municipalities examining similar policies,” stated a letter to Hodges and the council co-signed by nine business groups, including the Minneapolis Regional Chamber of Commerce, Downtown Council and the Minnesota Restaurant Association. The letter said the signers would take the city’s invitation for “robust stakeholder engagement.”

The Restaurant Association’s McElroy, who also represents the state’s hotel and resorts and campgrounds trade groups, said he is concerned about “patchwork” rules that will be difficult for businesses with locations in different jurisdiction to meet. But he said the business groups are willing to talk about ways to have paid sick leave and accurate scheduling and payrolls, though he saw flaws in many of the proposals unveiled so far.

“We’re working with other trade organizations to be responsible but also be concerned,” McElroy said.

But Ellen Bravo, of Family Values @ Work, said she hears double talk when business groups say they prefer statewide standards. “They say ‘no hodgepodge of regulations’ and ‘you can’t have one size fits all,’” Bravo said. “But the uniform standard they want is zero. No paid sick days.”