While Minneapolis officials were trying to preserve a $13 million bicycle bridge that would separate the Cedar Lake Trail from tracks for the proposed Southwest Light Rail Transit project, the Minneapolis Park & Recreation Board was wondering if that was such a good idea.

The bridge, ultimately removed from the proposed Southwest LRT plan as a cost saving measure, would have taken trail riders and pedestrians up and over freight and light rail trains near where the Cedar Lake and Kenilworth trails join, just north of the Kenilworth Corridor.

“The MPRB believes this structure poses the potential for a significant visual impact on the setting of Cedar Lake Park due to its length and height,” the board noted.

The comment is part of a lengthy response by the park board to the supplemental draft  environmental impact statement (SDEIS) for the Southwest LRT project — one of more than 200 responses submitted to the Met Council before the official comment period ended July 21.

The Southwest LRT project staff will now compile the comments and use them to prepare a final EIS for the 14.5-mile extension of the Green Line, which will run from downtown Minneapolis to Eden Prairie. That document will be presented to the Federal Transit Administration, which will have to sign off on it before the $1.74 billion project is allowed to move ahead.

It is the second environmental impact statement prepared for the project; this one to measure the impacts of three substantial changes to the project since the main EIS was completed in 2012. Those changes are: the alteration of the proposed route in Eden Prairie; the location of the proposed operations and maintenance facility in Hopkins; and the alignment in St. Louis Park and Minneapolis — particularly the co-location of light rail and freight rail in the Kenilworth Corridor.

The last of those changes drew the most comments from three of the most significant critics of the co-location decision: The City of Minneapolis, the park board and residents who live near the Kenilworth Corridor.

Minneapolis opposed co-location because it wanted to reroute the freight lines through St. Louis Park. It reluctantly agreed to co-location after remediation between the city and the Met Council. The park board also opposed co-location and considered legal action to force the alignment to tunnel under rather than bridge over the Kenilworth Channel between Cedar Lake and Lake of the Isles. It too agreed to drop its challenge in return for mitigation regarding how the line and the channel bridge will be built. Residents of the area, however, continue to oppose the alignment.

While neither the city nor the park board are still opposing the proposed route, both had concerns about how the line will be built. “The presence of freight rail and its impacts on the users of the Kenilworth Corridor has not been fully addressed in the SDEIS from the perspective of any failure of the freight rail infrastructure and the ability to respond to an emergency condition,” the park board wrote. And while it was concerned about how that bike bridge would look and how it would impact the natural grasslands it would pass over, the board remained worried about any spot on the alignment where people and trains cross.

The park board and the Southwest LRT project office staff have agreed to work together on designs for new pedestrian and rail bridges over the Kenilworth Channel. The board’s comments include its desire for bridges that produce minimal visual impact, minimal shading of the channel water and the fewest number of bridge supports in the water.

The park board took also issue with a statement in the SDEIS that a new station in the midst of the corridor might somehow improve the setting. “The addition of the station structures will make a positive contribution to the level of vividness that counterbalances the loss of vividness due to vegetation removal,” the document noted.

In response, the board wrote that “the introduction of a station cannot be considered a reasonable replacement for the loss of trees…” 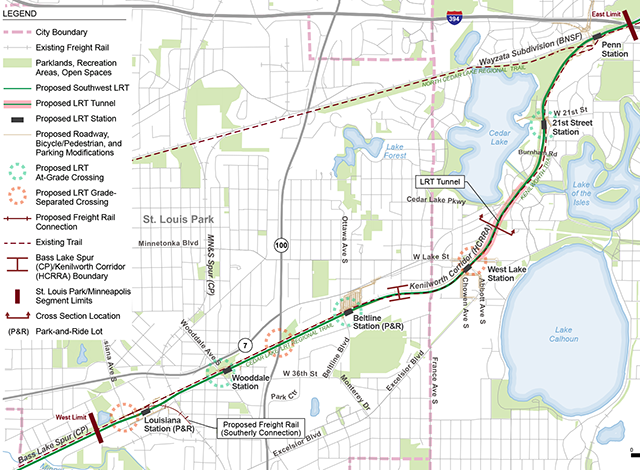 Courtesy of the Metropolitan Council
Overview of the St. Louis Park/Minneapolis Segment

The city of Minneapolis’ comments state that the city “continues to support the Southwest LRT project” but also that their approval was contingent on the Met Council keeping its end of the bargain that eventually earned the city council’s reluctant endorsement. Those elements include pedestrian and bicycling improvements; restoration of the Kenilworth Corridor after construction; the elimination of a second tunnel north of the channel; and an additional station at 21st Street.

The city’s comments said that its demands were meant to “lessen the negative impacts to residents and businesses near the corridor and to improve the quality of the project.”

The comments focused on construction impacts from noise and environmental exposure — and also on freight rail safety. “There must be coordination between the (project office) and the railroad to minimize the risk of derailment, especially if trains are carrying hazardous materials,” the city stated. It also worried about how blocked road crossing could delay emergency vehicles. The city both expresses concerns about safety where roads and trails intersect with trains and worries about the noise caused by LRT bells, whistles and horns.

While the comments from the city and park board were accepting of the proposed alignment, those from an organization representing a coalition of people who live along the corridor, LRT-Done Right, continue to oppose co-location for safety, aesthetic and environmental reasons.

“When Hennepin County and the Met Council chose the present route for SWLRT between the Chain of Lakes through the Kenilworth Corridor — including ‘co-location,’ thus making the temporary freight rail permanent — they accepted the responsibility to respect the natural and built environments that it travels through as well as the people who bicycle, walk, recreate and live there,” wrote LRT-Done Right spokeswoman Mary Pattock in a cover letter to the group’s comments. That hasn’t been done, the group asserts.

The group’s comments call the SDEIS inadequate in how it mitigates the impacts of noise, vibration, visual disruption, and potential environmental damage. But it also raises the specter of a freight rail accident. “We are seriously concerned about the safety of families and loved ones who would live in a Blast Zone surrounding ethanol trains and sparking LRT wires.”

The group, which submitted 46 pages of comments, also raised issues such as the loss of property taxes to area governments if the light rail line lowers the value of adjacent property — something the coalition asserts is likely. “The threat of a collision and derailment — such incidents are gaining increased attention in the news media — will in all likelihood increase the scrutiny of buyers as they evaluate the Kenilworth area as an investment and home for their families.”

They also doubt that the popular trails through the area can ever be restored once the line is built, as promised by planners. “The park-like environment will be permanently degraded by this infrastructure, as well as by the approximately 220 daily trains traveling over the historic Kenilworth Lagoon and through the corridor,” their comments state. 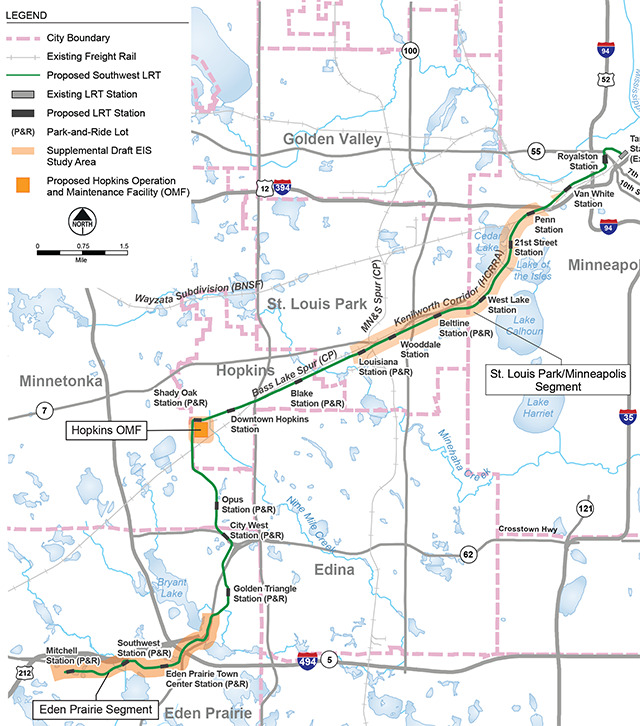 Many of the members of LRT-Done Right are also part of the Lakes and Parks Alliance, which brought suit against the project. That case, argued in early March, claimed the Met Council had violated state and federal law by requiring Hennepin County and five cities on the line to give approval known as municipal consent before the SDEIS was available. A ruling by U.S. District Court Judge John R. Tunheim is still pending. But actions taken recently by the Met Council might serve to make any ruling moot.

The recent budget-cutting exercise for the Southwest LRT project came after the supplemental draft EIS was published, and all cities along the line have had a chance to review it and comment on it. Now the Met Council has decided to ask the county and five cities along the route — Minneapolis, St. Louis Park, Hopkins, Minnetonka and Eden Prairie — to repeat the municipal consent process, complete with additional public notice and public hearings.

While the redo won’t bring additional delays — it will happen while project staff proceeds with planning — it could preempt any ruling by Tunheim. Lawyers for the plaintiffs have argued that municipal consent must wait until after the publishing of the final EIS — something not expected until next summer — and it is unlikely the courts would force such a delay.

Met Council Chair Adam Duininck said last week it is possible that legal strategies influenced the decision to repeat municipal consent in all cities, rather than just Eden Prairie, where the most significant changes for the project came out of the budget-cutting process.

“But I think it is more that when you look at the nature of the project and how much it’s changing end-to-end we just thought it would be better to error on the safe side,” he said. “We’re confident that they all will support it and it still works within our timeline.”