Like most final nights of the legislative session, Minnesota lawmakers had left a lot of work to the last minute. It was past 9 p.m., and both the House and Senate were hurriedly passing and swapping final bills to finish on time. The big thing up next on the House’s agenda was a bonding bill, while the Senate was giving another bill its third reading. The chamber galleries were full of spectators trying to track legislation.

Then the shouts started.

With all the attention focused on the action taking place on the House and Senate floors, no one had noticed that just outside the chambers, the building was engulfed in flames. And by the time anyone realized what was going on, the fire threatened to block off the only way out of the Capitol for an estimated 300 people.

The headline in the Minneapolis Tribune the following day was a simple one: IN ASHES. The date was March 2, 1881.

It may be hard for most Minnesotans to imagine state lawmakers working anywhere other than the current Capitol building, an architectural darling that’s been around for more than a century. But Minnesota had not one, but two state Capitol buildings before the current one. As you might expect, each was the site of major moments in the state’s early history. But each also had problems, issues that would eventually lead to the construction of the grandiose statehouse Minnesotans enjoy today, currently in the midst of a massive, multi-year restoration project.

The plot to steal the Capitol

The first Capitol was built in 1854 at 10th and Cedar Streets in downtown St. Paul — an area that today is home to buildings like the Fitzgerald Theater and the McNally Smith College of Music. Back then, Minnesota wasn’t even a state yet, so it was a modest structure, built for a territorial Legislature that was so small that the House and Senate were called councils. Designed by little-known builder N.C. Prentiss, the building had a small dome and four Greek-style columns. All for the low, low price of $45,000 — a little over $1 million in today’s dollars.

Early on, state officials designated St. Paul as Minnesota’s seat of government, while Stillwater got the state prison and St. Anthony (which would later be absorbed into Minneapolis) got the public university. But in 1857, as Minnesota’s population exploded and statehood became imminent, a plot developed by a handful of council members to move the seat of state government to St. Peter.

Republicans, who were slowly gaining more control of territorial politics, thought they could more easily dominate an agriculturally-based Minnesota. Ideally, they felt, the state Capitol should lie in the Minnesota River Valley in the southwest, where St. Peter would be the approximate center of population, William E. Lass writes in his book, “Minnesota, a history.” There was another reason for the interest in moving the Capitol south: Many members of the territorial Legislature had a vested interest in the St. Peter Company, which would gain financially from a move.

Advocates quietly introduced a Capitol removal bill that easily passed the territorial Legislature. But in a dramatic manuever, Joe Rolette, a councilman from Pembina, disappeared with the bill to a hotel room in St. Paul, where he stayed hidden for a week. “The council’s sergeant at arms, another St. Paul supporter, conducted a systematic search of all of the wrong places and could not find Rolette,” who dramatically appeared on the council floor as session came to a close, Lass writes.

It didn’t matter. Supporters of the Capitol removal just drafted up a new bill and the governor signed it. A modest frame for a new Capitol building was even built in St. Peter, complete with a street plan. But after court battles and the removal of the territorial governor, St. Paul ultimately won out. In 1858, when Minnesota officially became a state, St. Paul’s place as its Capitol city was sealed.

Back in St. Peter, the bones of the would-be new state Capitol were turned into the courthouse for Nicollet County.

After statehood, Minnesota and its government grew, and so did the original Capitol. Several more wings and were added for the courts and additional space for state agencies. Columns were added and the dome remodeled. But all that work would turn to cinders on March 2, 1881, after the fire destroyed all but the four outer walls of the building.

The scene was chaos: In the Senate, lawmakers found out about the fire when a member burst out of the smoking room and shouted “fire!” Windows in the back of the Senate gallery revealed that the only exit out of the building, the main staircase, was surrounded by flames. In the pandemonium, the secretary of the Senate suggested that someone make the motion to adjourn, which was unanimously and enthusiastically approved. Several senators jumped out of a window, while others rushed down the flaming staircase. In the House, the Speaker Loren Fletcher dragged the chamber’s pages out of the building with him.

“Brave men blanched with fear,” read the account from the Minneapolis Tribune. “A thousand thoughts rushed through excited minds, and the distance from the windows to the ground was measured with anxious eyes. ‘Shut the doors!’ ‘Shut the doors!’ ‘Don’t make a draft!’ ‘Act like men!’ yelled the excited crowd, who rushed about the room measuring every possible mode of escape.”

Somehow, there were no major injuries. But most of the bills, documents and books in the state library were lost. A few important volumes from the library were saved by “Chappel, the one-armed janitor of the Capitol building,” according to the article. “He lingered in the room until a burning timber fell, striking him on the head. He left then, but carried under his single arm all the books he could conveniently and successfully grasp.”

There was never a definitive cause found for the fire, said Brian Pease, Capitol historic site manager for the Minnesota Historical Society. Many suspected a poor ventilation system was to blame — it was early March in Minnesota, and the heat was likely on full blast — while others thought a lit cigar was the culprit.

The most interesting speculation was a conspiracy theory: On the last night of session, a bill was introduced to build a new Capitol, and some suspected the fire was a plot to get rid of the old one fast. Really fast.

In 1883, two years after the fire destroyed the first Capitol, the second structure was completed on the same site. The new building was more eclectic than the first, with a 250-foot tower, mansard-style rooflines, a red brick exterior and elaborate woodwork in the interior. The building was designed by prolific architect Leroy Buffington, known mostly for hotels at the time, and cost quite a bit more than the first: $275,000 (a little less than $7 million today).

But its prestige was short lived. Poor ventilation and overcrowding led to a fairly swift effort to build yet another a new Capitol. The Legislature would make its first appropriation for the present-day Capitol just 10 years later, in 1893, while the old building became known as “Buffington’s Folly.” 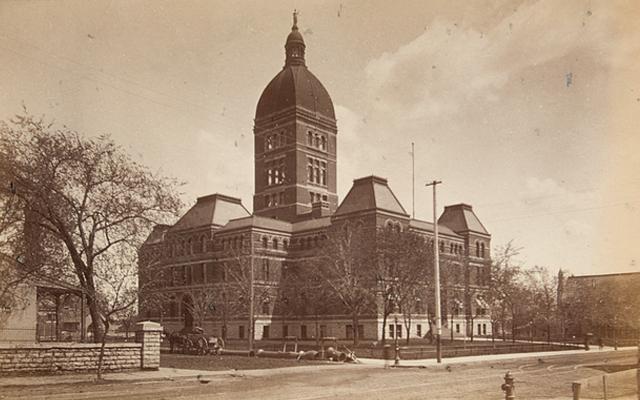 Courtesy of the Minnesota Historical Society
The second State Capitol building in 1886.

Problems with the first two buildings would play directly into the design of the current Capitol. Designers wanted to move the structure up and away from the business district, where it could accommodate the growing number of state agencies and government workers. The building would be much more stately that the first two, and it would be fireproof.

“The second Capitol is almost like a glorified county courthouse,” Pease said. “I think there was a desire to improve. In the first three or four decades of our statehood, we were still in that formative state. By the 1890s, we were really becoming players in the national economy. We wanted to establish ourselves as one of the great states in the lower 48, and one way of doing that was building a Capitol that was lasting and striking. For a state, it’s like saying: ‘We’ve arrived.’” 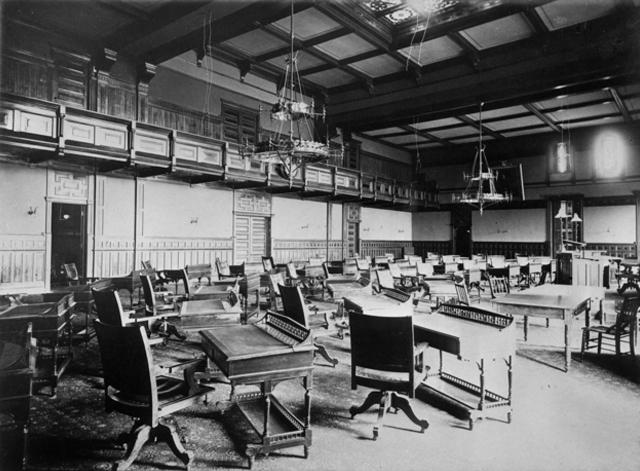 Courtesy of the Minnesota Historical Society
The interior of the second State Capitol building in 1885.

The second Capitol served its purpose until 1905, when the new building on the hill was completed and ready for use. The new building, designed by architect Cass Gilbert — the commission essentially launched his national reputation — cost an estimated $4.5 million in the early 1900s.

On January 2 that year, thousands of Minnesotans traveled to St. Paul to walk through the marbled halls of their new state Capitol, more than a decade in the making. Today it’s still heralded as one of the country’s most beautiful public buildings, and legislators have so far invested nearly $300 million in restoration to make the building last for another 100 years. 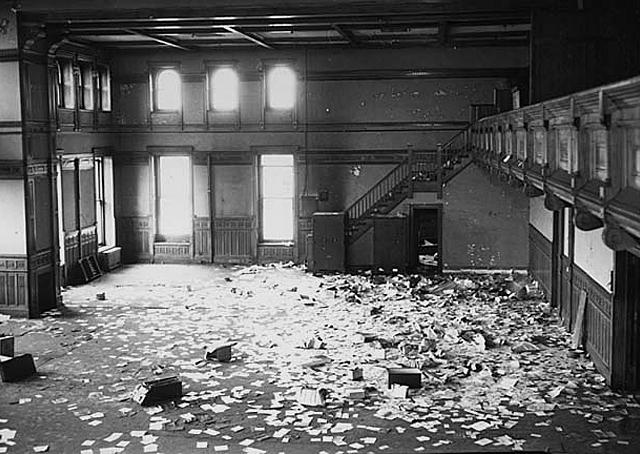 Courtesy of the Minnesota Historical Society
A photo taken on October 8, 1937, of the demolition of the second State Capitol.

The old Capitol served a purpose as a state office building until a new one  — still used by House and Senate members today — was constructed much closer to the Capitol. With little fanfare, the old building was demolished in the 1930s to make way for something more useful at the time: a parking lot.

Only two major pieces of the second building were salvaged. One is a stained glass window of the seal Minnesota, which found a home at Camp Ripley in Little Falls. The other is the statue that sat atop the tower on the second Capitol. That piece now sits in McLeod County Historical Society in Hutchinson, 83 miles from its original home in St. Paul. 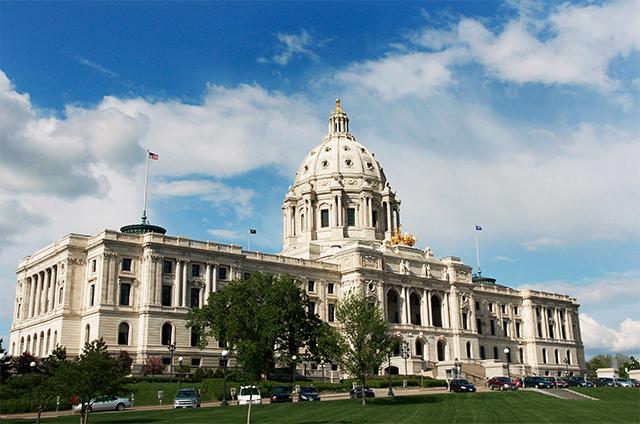 Copyright Minnesota House of Representatives
Today the Minnesota State Capitol heralded as one of the country’s most beautiful public buildings.

Fire, intrigue and ambition: How Minnesota got one of the country’s great Capitol buildings